In Praise of Vox Media, Max Fisher, and Zack Beauchamp

Let’s take a moment out of this busy day to savor the presence of Vox Media, and, in particular, its two writers who are obsessed with the Israeli-Palestinian conflict, Max Fisher and Zack Beauchamp. The two privileged, white, non-Middle Eastern Americans are not obsessed with this conflict out of curiosity or a desire to learn more about a topic on which their knowledge is sparse and their personal experience is nonexistent. Reader and writer are not on a journey of discovery together. Since they already know everything about it, they write "explainers" that contain "everything you need to know," weaving history, current events, and analysis into a rich journalistic tapestry that is displayed on easy-to-understand online "cards" where you will be shown, for example, where the Middle East is located on a map of the world. 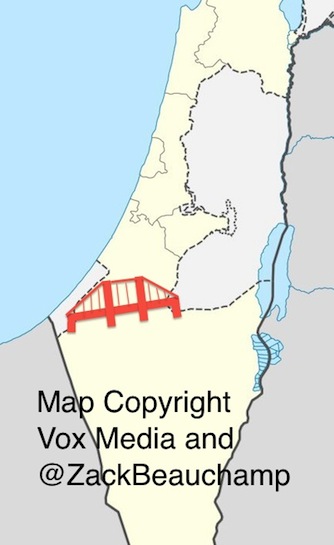 In recent weeks we have been told in various Fisher-Beauchamp seminars that there exists a physical bridge, like the Tappan Zee, connecting Gaza and the West Bank; that Hamas is rocketing Israel because its desire is merely "ending the Israeli occupation," as opposed to ending Israel itself, as the group openly and proudly proclaims every day; that Hebron, home to an almost unbroken Jewish community dating back to the start of the Biblical era, has only been home to Jews for a century; that Israel imposed a blockade on Gaza after Hamas won Palestinian elections, rather than after Hamas began attacking Israel; that "The Israel-Palestine conflict has killed **14 times** more Palestinians than Israelis;" and on and on and on. The mistakes, of course, are that special kind that always cut the same way—in this case, always turning the Israelis into the bad guys and the Palestinians into the good guys.

The joke used to be that Vox’s scribblers produced their "cards" by consulting Wikipedia, but that’s probably unfair to Wikipedia. Said scribblers likely would have caught all of their errors if they’d actually bothered to consult the frequently unreliable online encyclopedia.

The problem is much deeper. There is a disconnect between what Fisher and Beauchamp think they know and what they actually know, and it’s why all of this is just so damn funny. The disconnect is obvious to everyone but the two writers themselves. They’re the joke, but they’re not in on it. It’s a classic shtick, a contemporary online, journalistic version of the Three Stooges, where Larry, Moe, and Curly walk away from the rubble of a house they were supposed to fix congratulating each other on what a bang-up job they did. The Three Stooges and the Two Stooges are funny because they share a rare comedic combination of incompetence, arrogance, and obliviousness. Unfortunately, the guys working at Vox aren’t actors.

Therefore we must salute Ezra Klein and Matt Yglesias for finding not one but two such talents, and for hiring both of them. Let us praise Vox Media and its stooges as they stagger and stumble from one hilarious mishap to another, smacking each other in the face with two-by-fours and stepping on rakes. In a way, they're doing us all a favor: Who among us hasn’t composed some great tweets while watching them take their pratfalls? And there’s only more fun to come. Vox is the best thing to happen to progressivism this year. Mazal tov, guys, and watch out for bowling balls rolling off roofs.