Questions about Hillary Clinton’s physical health have prompted a reexamination of the concussion-related scare she suffered in 2012, a Free Beacon analysis has determined.

After embarking on her underwhelming book tour, Clinton has sought to dismiss questions about her health by joking that 44-year-old Rep. Paul Ryan (R., Wis.) has had several sports-related concussions. She suggested this was similar to a very old person (66) suffering a concussion after fainting, and later being hospitalized with a potentially life-threatening blood clot in her brain. Clinton insisted that the lingering effects of the health scare—dizziness, double vision—have "dissipated."

The timeline of Clinton’s health scare seems to raise more questions than it answers.

Clinton cancels a scheduled trip to North Africa. According to a spokesman she was feeling "under the weather," and suffering from a "bug." Around this time, Clinton reportedly faints and falls over, suffering a concussion.

Clinton is diagnosed with a concussion that a State Department official described as "not severe."

Clinton spokesman Phillipe Reines’ issues a statement explaining the incident: "While suffering from a stomach virus, Secretary Clinton became dehydrated and fainted, sustaining a concussion. She has been recovering at home and will continue to be monitored regularly by her doctors." Reines says the secretary "is looking forward to being back in the office soon." Clinton’s doctors also issue a statement advising her to "cancel all work events for the coming week."

Clinton informs the Senate Foreign Relations Committee and the House Foreign Affairs Committee that she is unable to testify before Congress on Benghazi later that month.

Reines announces that, due to Clinton’s deteriorating health condition, her doctors have "advised that she may not fly for any significant duration in the coming weeks." Travel is put on hold through "mid-January."

Clinton is hospitalized after doctors discover a blood clot during a follow-up exam. Reines issues a statement, but does not specify the location of the clot (her brain).

Clinton’s doctors offer more details about the incident in a statement, saying they had discovered the formation of a "right transverse sinus venous thrombosis," meaning "a clot in the vein that is situated in the space between the brain and the skull behind the right ear. It did not result in a stroke."

Clinton is released from the hospital and photographed walking to her motorcade with Bill and Chelsea at her side. The photo op takes place under suspicious circumstances. The New York Daily News reports that Clinton "emerged from a hospital side entrance in a van, only to reenter a different part of the same facility just 20 minutes later. Bill Clinton, sporting a smile, and daughter Chelsea, holding her mom’s hand, were spotted exiting with her and a security detail."

Reines notes in a statement that Clinton is "eager to get back to the office." Nuland insists that the State Department has been "extremely forthcoming" regarding the details of the episode. 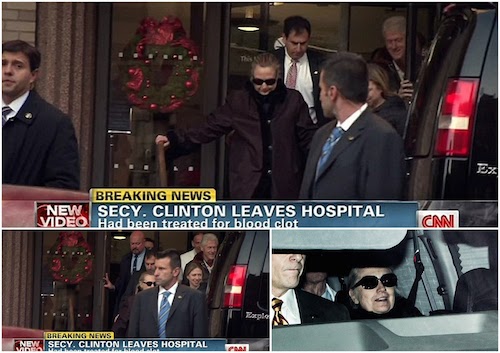 Clinton reportedly returns to work. Nuland declares the Secretary of State to be "fully recovered."

Clinton appears in her first photo op since the incident at an event with the Irish ambassador. She tells reporters she is excited to be working again.

Clinton testifies on Capitol Hill about the Benghazi terrorist attacks while wearing special glasses designed to mitigate the "lingering issues stemming from her concussion," according to Reines.

Clinton takes part in a joint "60 minutes" interview with President Obama while wearing the special glasses. 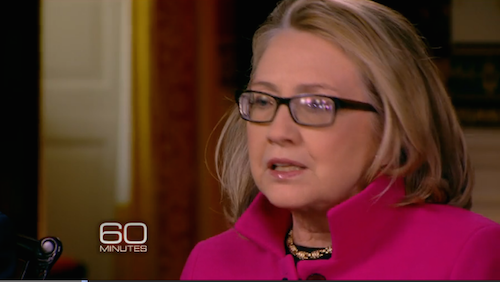 Bill Clinton upends the official narrative during a question-and-answer session at the Peterson Foundation in Washington, saying the "terrible" concussion/blood clot episode "required six months of very serious work to get over." The former president insisted that his wife’s health scare was "something she never low-balled with the American people, never tried to pretend it didn’t happen."

This, of course, appeared to contradict the official State Department line that Hillary was "fully recovered" just one month after the initial concussion.

Hillary appears on the cover of PEOPLE Magazine. Some have suggested that she is holding an old person's walker in the photo, while others have denied this claim. Many questions remain unanswered about her ability to walk and stand upright without assistance. 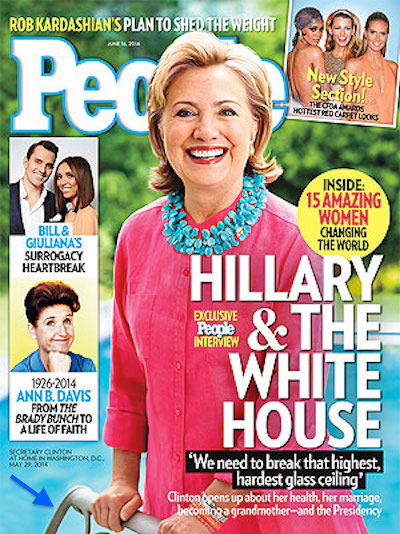 A previous Free Beacon analysis has determined that, if elected, Hillary Clinton would be one of the oldest world leaders in history. Fortunately for her, Team Clinton possesses an unmatched political acumen that should allow them to play down legitimate concerns about Hillary’s health and mobility heading into 2016.