PEOPLE Magazine has formally denied allegations that Hillary Clinton is using an old person’s walker on the cover of its latest issue:

"Secretary Clinton is standing next to a patio chair in the backyard of her home where the photo shoot took place! I have also attached another photo from the shoot—thanks for checking in on this," Nancy Valentino, a senior vice president of communications at Time Inc., which owns People, wrote to Business Insider in an email.

However, the celeb mag declined to address a damning Free Beacon analysis indicating that PEOPLE is waging a subtle attack on the 66-year-old former Secretary of State and Goldman Sachs affiliate.

Meanwhile, the photo provided to support PEOPLE’s denial, while it does show Clinton appearing to walk without assistance, is also inexplicably grainy, out of focus, and devoid of color–unlikely to satisfy skeptics. What's REALLY going on here?

UPDATE: The Free Beacon has obtained the following "raw" photo from a source. Draw your own conclusions. 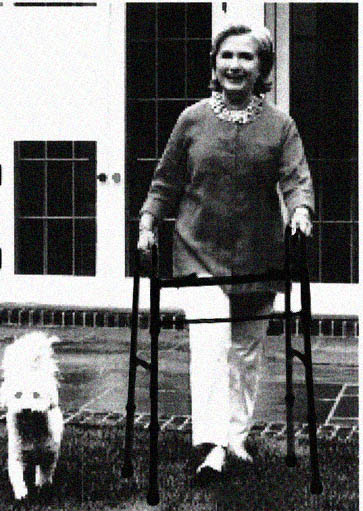 @AndrewStilesUSA funny thing is when i photograph old people who need a walker, sometimes i'll replace it with a chair for them to lean on