Former Democratic presidential candidate Hillary Clinton is back in the news with the release of her new election memoir, What Happened.

In her book, Clinton compares herself to fictional character Cersei Lannister from the popular book series and HBO show Game of Thrones.

"Crowds at Trump rallies called for my imprisonment more times than I can count," Clinton wrote. "They shouted, ‘Guilty! Guilty’ like the religious zealots in Game of Thrones chanting ‘Shame! Shame!’ while Cersei Lannister walked back to the Red Keep."

We at the Free Beacon examined Clinton's self-comparison to the Queen, First of Her Name, to see if there is any truth to the comparison. You won't believe what we found.

Contempt for the People

Clinton and Cersei both have contempt for the average citizen. During the 2016 campaign, Clinton said Trump supporters belonged in "a basket of deplorables" that were "irredeemable." Clinton distanced herself from the comments, but in her new book she defends the remarks.

"I know that a lot of well-intentioned people were insulted because they misunderstood me to be criticizing all Trump voters. I’m sorry about that," Clinton wrote. "But too many of Trump’s core supporters do hold views that I find—there’s no other word for it—deplorable."

Clinton's contempt wasn't just for Trump supporters. During a campaign event, she refused to hug one of her supporters. Clinton stood less than a foot away from the supporter, and had her hand on the volunteer’s shoulder when she declined the hug.

Cersei married the king of Westeros and thus became one of the crucial power players in the kingdom. Through her marriage, Cersei was able to plot and murder her way to the crown.

Hillary married Bill Clinton and became First Lady of the United States, where she attempted—and failed—to reform health care and launched her successful Senate campaign. Her proximity to power offered her the opportunities to achieve her ambitions. Almost, anyway.

Also like Cersei, Clinton refused to leave her husband after she discovered his infidelities.

In the latest season of GoT, Cersei developed a close relationship with the Iron Bank of Braavos, one of the wealthiest banks that lends money to the Lords of Westeros.

Cersei blew up the Great Sept of Baelor to escape the judgment of the High Sparrow.

When Cersei was confronted with the issue of the White Walkers crossing into Westeros, she promised that she would send her armies to fight the threat. But she lied, thereby abetting the White Walkers to cross the border because it would allow her to solidify her rule over Westeros.

In a leaked speech, Clinton outlined her desire for open borders:

"My dream is a hemispheric common market, with open trade and open borders, some time in the future with energy that is as green and sustainable as we can get it, powering growth and opportunity for every person in the hemisphere."

Before Daenerys Targaryen launched a siege on King's Landing, Cersei ordered a preemptive attack that weakened Daenery's forces and made them less of a threat.

Like Cersei, Clinton understood the importance of launching a pre-emptive strike before your enemies become too powerful. That is why Clinton voted in favor of the Iraq War.

Look, we never said she was all bad.

Cersei has the Mountain. 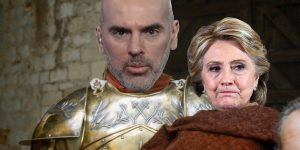 "I drink because it feels good." – Cersei Lannister

"Off I went into a frenzy of closet cleaning, long walks in the woods, playing with my dogs, and, you know, my share of Chardonnay." – Hillary Clinton

Despite all the similarities between Cersei and Hillary, there are some significant differences. Cersei served time in prison for her crimes, while Clinton was able to walk free from hers.

The biggest difference? Both played the game of thrones. But only Cersei (for the time being) actually won.