Is Hillary too cozy with Wall Street?

Like most rich liberals, Hillary Clinton has tons of even richer friends who work on Wall Street. Though she would never say it publicly, Clinton and her closest allies almost definitely high-fived when New York’s finest finally evicted the "occupiers" at Zuccotti Park.

On Friday, the whole Clinton clan will convene at Goldman Sachs headquarters in Manhattan for a meet and greet with top donors to the Bill, Hillary & Chelsea Clinton Foundation. The New York Times reported last month:

The event, which is held annually, will include a morning talk and lunch with the Clintons and their daughter, who as vice chairwoman of the foundation her father started has taken on a leadership role. Later, Mr. Clinton and his daughter will join donors for dinner at Birreria, the chef Mario Batali’s rooftop restaurant in the Flatiron district of Manhattan. …

Steve Bing, a Hollywood producer; the media mogul Haim Saban; and the hedge fund billionaire Marc Lasry have given generously to the Clintons’ political campaigns and their philanthropic causes. The foundation also receives millions of dollars in support from overseas donors who are barred from contributing to United States political campaigns, including Frank Giustra, a Canadian businessman, and Victor Pinchuk, a Ukrainian steel magnate.

Goldman Sachs, which has donated hundreds of thousands of dollars to the Clinton Foundation, paid Hillary Clinton around $400,000 last year to make two speeches to top executives and clients. Even the liberal Mother Jones is raising questions about the former secretary of state’s associations with the financial firm that is much maligned in liberal circles, despite its generous financial support for Barack Obama:

Clinton's relationship with Goldman Sachs is not unique. Bill and Hillary Clinton have always nurtured cozy ties with Wall Street—in terms of policies and funds-chasing (for their campaigns and the foundation). The chief economic guru of the Clinton administration was Robert Rubin, a former Goldman Sachs chairman, and the financial deregulation and free-trade pacts of the Clinton years have long ticked off their party's populists. In his new book, former Treasury Secretary Timothy Geithner recalls visiting Bill Clinton at his Harlem office and asking his advice, as Geithner puts it, on "how to navigate the populist waters" and respond to the American public's anger about bailouts and Wall Street. The former president didn't seem to have much sympathy for these popular sentiments and replied by referring to the CEO of Goldman: "You could take Lloyd Blankfein into a dark alley and slit his throat, and it would satisfy them for about two days. Then the bloodlust would rise again." [Emphasis added.]

Former Montana Governor Brian Schweitzer, who may challenge Hillary for the Democratic nomination in 2016, is already attacking Clinton for her close ties to Wall Street. "You can’t be the candidate that shakes down more money on Wall Street than anybody since, I don’t know, Woodrow Wilson, and be the populist," Schweitzer told TIME magazine.

Of course, most Democrats don't actually care, so long as Hillary gets elected. But a resurgence of the Occupy "movement" would be fun to watch, at least. 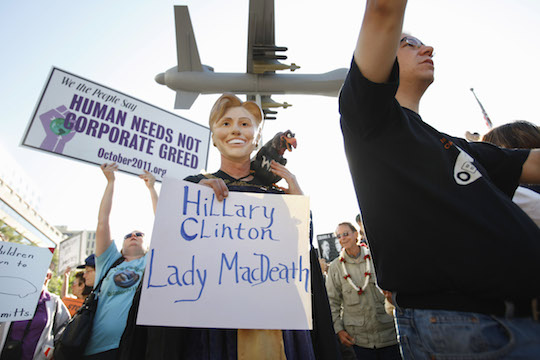