Yesterday saw the ceremonial groundbreaking for the Dwight D. Eisenhower Park for Lost Tourists. As has been reported, the Eisenhower memorial project has been a mess from the beginning, and now in the usual silly ceremony of shiny shovels shoved into dirt the mess is moving from the noumenal to the phenomenal—it's not just a bad idea anymore, folks. Frank Gehry's steel "tapestry" will, eventually, hang from massive concrete pillars clad in limestone condoms and depict the "Cliffs of Pointe du Hoc," which is the arty way of saying Normandy, emphasis on the rocks. While we agree that if you squint you can tell these are cliffs, we aren't sure we'd say that's the obvious interpretation, and we certainly wouldn't say the tapestry is a monument to Gen. Eisenhower's leadership at D-Day without being told. So, here are five other things the big net actually looks like: 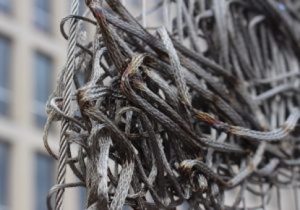 Close look at the wires of the "tapestry" / NCAS

1. The thing you pulled from the drain

You know what we're talking about and don't pretend you don't. It's hair and nail clippings and floss and God knows what else suspended in a viscous film of soap fats and toothpaste phlegm. It looks like someone put a desiccated rat through a taffy pull and dipped it in oil; you hope they're going to burn it because—damn, do I have to keep looking at this?—burn it already! Unfortunately the thing you pulled from your drain doesn't light, so you have to choose between flushing (please, oh, please, go down) and the trashcan, hoping it won't in fact crawl back out.

This is actually your plate but we're all friends here; no one wants you sent back to the kids’ table. Mashed potatoes, turkey fibers, stuffing with the celery picked out—before it goes down the gullet it's the best building material there is. Mix and mash and fork scratch and knife pat your way to a castle. Cranberries make for great little soldiers, and so maybe this is indirectly a decent tribute to Ike; after all, Gehry insisted on including a youthful statue of the president at every stage of the design process—did young Eisenhower play with his food? Considering the decorum of the man, probably not. You, sorry, your cousin, will just have to shape up.

Not a hard connection to make, considering the materials—"steel tapestry," ah, yes, looks just like the Bayeux—but we're being thorough here. The question this raises, though, is what exactly gave this steel sponge such a beating? What enormous pot was Frank Gehry scouring? A puzzle, until one remembers Gehry's other work and realizes that those tortured structures didn't look so soul-killing by accident. They were designed to cry out to heaven for justice. Something had to scrape away any humanity or proportion or natural order they may have once accidentally contained. Looks like now we know what did.

Maybe we're being too harsh with Gehry; he is, after all, a "starchitect," and surely wouldn't deconstruct conventional monumental architecture just to be sadistic. There must be a reason for his violence against normal standards of beauty and civic narrative construction. Perhaps this tangle of wire is a representation of postmodernity's aesthetic scab. The terrors of the twentieth century wounded our collective psyches, and artists, seeking authenticity, gleefully joined in, picking at the scab every time our bleeding stopped. Maybe Gehry's just showing us how self-aware he is, as he violates all the classical sensibilities President Dwight D. Eisenhower held in honor.

5. That weird water stain in your apartment

We got a little high-concept there for a bit, so let's bring things back down to the concrete, in this case, maybe literally. It might be in your laundry facility, or by the building's dumpsters, or just on the ceiling in a corner, but it's an unexpected discoloration that looks damp somehow even when it's dry. It doesn't smell, and you don't think it's why you keep getting sick, but you also didn't know concrete or plaster or linoleum could turn that color—is that Xanadu? Anyway, you should probably talk to somebody about this.

To learn more about the Eisenhower memorial project, check out this and this from yours truly. 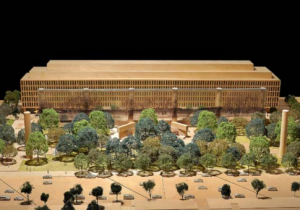 Model of the memorial design, circa 2016 / Eisenhower Memorial Commission 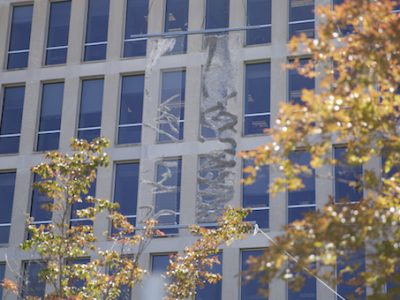 A Whole Tapestry of Mess