Yesterday saw the ceremonial groundbreaking for the Dwight D. Eisenhower Park for Lost Tourists. As has been reported, the Eisenhower memorial project has been a mess from the beginning, and now in the usual silly ceremony of shiny shovels shoved into dirt the mess is moving from the noumenal to the phenomenal—it’s not just a bad idea anymore, folks. Frank Gehry’s steel “tapestry” will, eventually, hang from massive concrete pillars clad in limestone condoms and depict the “Cliffs of Pointe du Hoc,” which is the arty way of saying Normandy, emphasis on the rocks. While we agree that if you squint you can tell these are cliffs, we aren’t sure we’d say that’s the obvious interpretation, and we certainly wouldn’t say the tapestry is a monument to Gen. Eisenhower’s leadership at D-Day without being told. So, here are five other things the big net actually looks like: 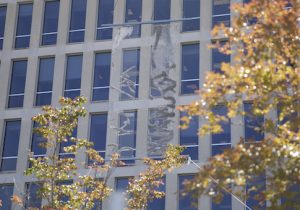 There is a part of me that would like to be able to laugh about the—legally speaking probably imminent but temporally speaking still a ways off—proposed Dwight D. Eisenhower Memorial. It is, after all, to be built between the Lyndon Baines Johnson Department of Education building and the John F. Kennedy-venerating Smithsonian Air and Space Museum, in earshot of the carousel on the National Mall that plays ice cream truck music forever. Designed by Frank Gehry with an estimated cost of some $150 million, it is supposed to include 8 enormous columns, 10 feet in diameter and 80 feet tall, standing about huge and erect, clad in limestone, like some sort of over-enthusiastic temple complex for Osiris or—as others have described them more delicately—missile silos, or smokestacks, or bad jokes about Ike's interstate highway system.