Though an investigation found that the U.S. government abused the surveillance system to target a Trump aide, the Department of Justice's latest hire slammed a probe into the origins of that wrongdoing as "partisan silliness."

The inspector general said the FBI made more than a dozen "significant" errors and omissions in the surveillance applications. The report was not as critical of Justice Department officials, though attorneys in the national security division did approve of the error-filled warrant applications.

The Justice Department did not respond to a request for comment about whether Hennessey will play any role in the Durham probe.

Durham, the former U.S. attorney for Connecticut, was picked in April 2019 by then-attorney general William Barr to lead a Justice Department investigation into the Russia probe. Durham was designated to serve as special counsel over the investigation on Oct. 19, 2020.

Prior to joining the Justice Department, Hennessey was a senior fellow in national security at the Brookings Institution and the executive editor of the Lawfare blog. She has criticized Durham in the past, saying after he was appointed special counsel that he "hasn't come up with anything" of substance during his investigation. 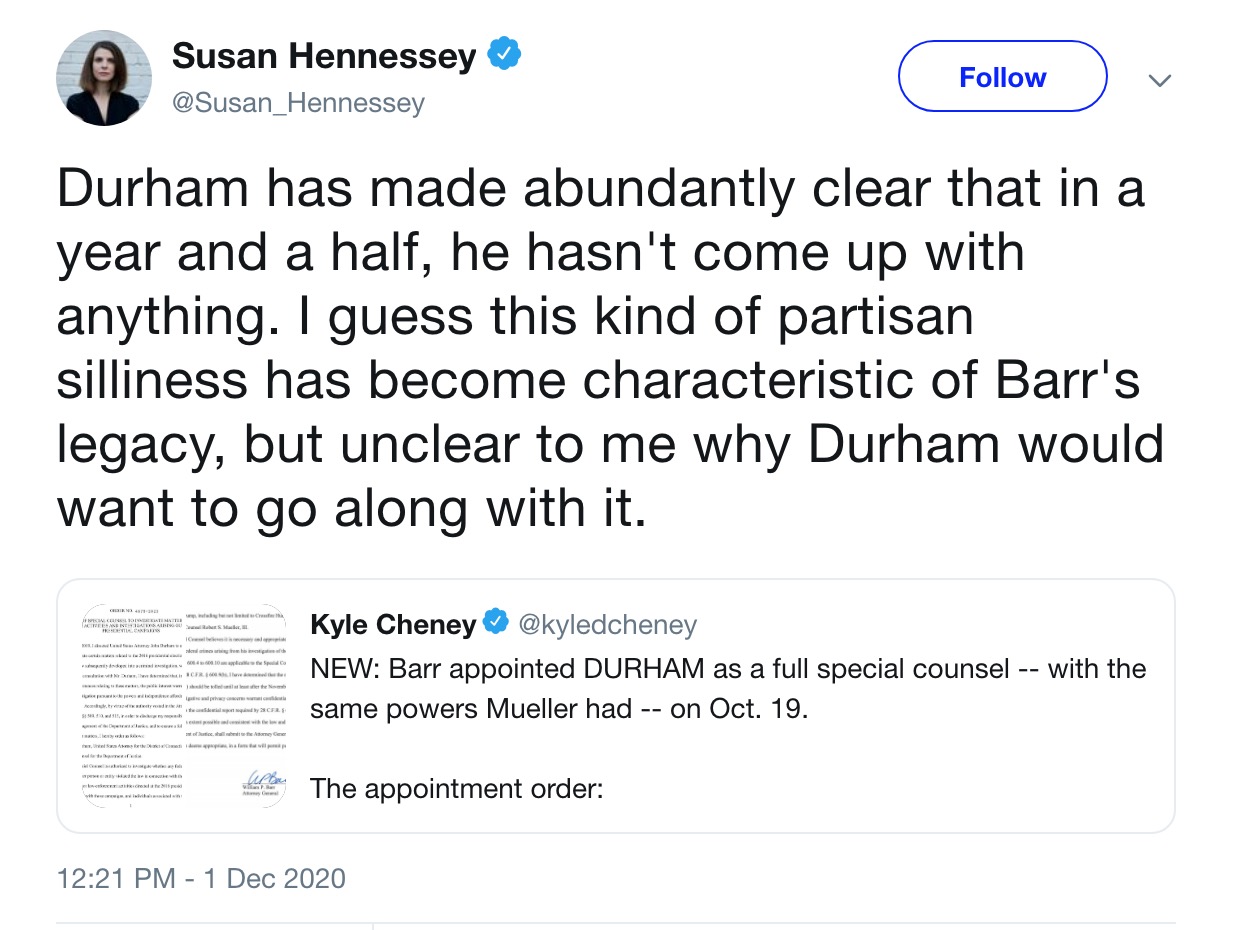 "I guess this kind of partisan silliness has become characteristic of Barr's legacy, but unclear to me why Durham would want to go along with it," Hennessey wrote in a now-deleted tweet.

Hennessey, who served as a lawyer at the National Security Agency during the Obama administration, cast further doubt on Durham's investigation in an interview with The Guardian last year.

"The Durham investigation presents the opportunity for bad actors to make a lot of mischief, but the lack of clarity makes it difficult for observers to criticise," she told the newspaper.

Attorney General Merrick Garland said during his January confirmation hearing that he would allow Durham to continue his work. But he also stopped short of saying that he would release a public report of Durham's investigation once it ends.

Durham has secured only one conviction during his investigation. Former FBI lawyer Kevin Clinesmith pleaded guilty last year to altering an email regarding former Carter Page's relationship with the CIA.