A "Times Square-scale mural" mocking American soldiers has been erected in the Iranian capital city of Tehran, according to pictures published by an advocacy organization pushing for democracy in Iran.

The sprawling mural mocks U.S. Marines by parodying the famous Iwo Jima memorial by depicting American soldiers as planting an American flag on the backs of dead Muslims, according to pictures published by the Foundation for Democracy in Iran, or FDI. 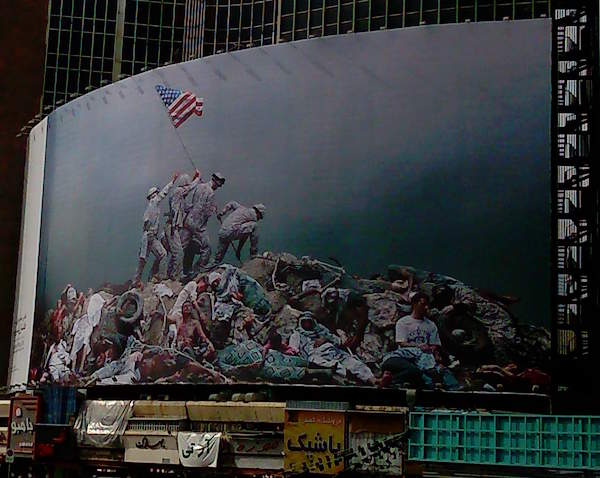 The anti-American mural is just the latest propaganda from Iran meant to foster distrust and hatred for the West, according to the foundation.

"More from President Obama's new ‘friends' in Tehran, a gigantic street caricature of the famous Iwo Jima memorial in Washington," Kenneth Timmerman, the organization's president and CEO wrote in a recent email to supporters highlighting the mural. "The intent is clear: to poison the mind of ordinary Iranians to the brave soldiers carrying our flag and wearing our uniform."

FDI, on its website, criticized the Iranian regime for "thumbing its nose at America" in the wake of the recent nuclear accord.

"Last week, it was another nuclear-capable missile test and the execution of an Iranian-American. This week, it's a series of Times Square scale murals across Tehran, insulting the U.S. Marines," the organization wrote.