After Reid apologized for old homophobic blog posts in December 2017, her blog "The Reid Report" was effectively taken off of the Internet Archive's Wayback Machine thanks to an exclusion request added by the website's operators. But a mirror of the Wayback Machine operated by the Library of Congress remains unaffected, and several of Reid's posts are still visible on that site.

In a January 9th blog post, Reid weighed in on the celebrity feud between "The View" host O'Donnell and Trump. Earlier in the feud, Trump had called O'Donnell "a real loser," a "slob" with a "fat, ugly face," and "fat little Rosie."

Nonetheless, the liberal pundit was on Team Donald.

"How much longer until that chubbed-out shrew Rosie O'Donnell gets her fat ass canned by Babwa?" Reid asked, in an imitation of "The View" co-host Barbara Walters' first name.

"How much longer will the freak show that is 'The View' continue to darken our television screens?" she continued. "How much more kick-ass funny can Donald Trump be???" 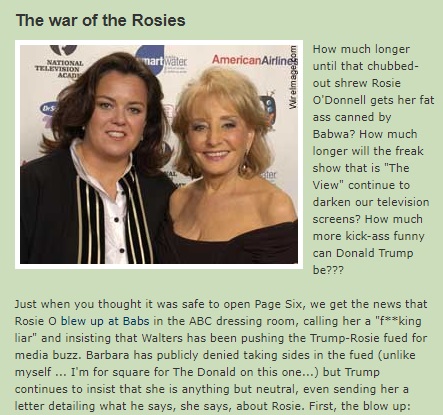 Reid continued to say that unlike Walters, she was not neutral in the debate. "I'm for square for The Donald on this one..." she wrote.

She then linked to a Trump open letter attacking O'Donnell, with the comment. "Here it is, but bigger... heehee..." 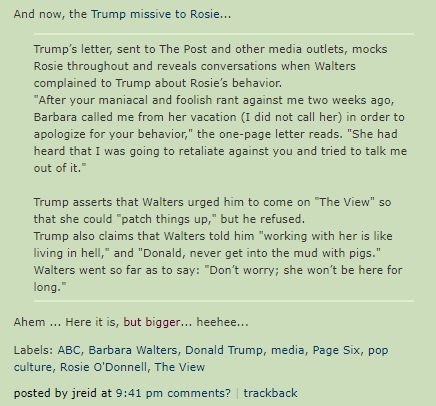 The Library of Congress archived Reid's now-defunct blog post on January 14th, 2007 at 06:52 AM ET. If Reid's website was indeed hacked as she now claims, the hacker would've had to target her site over a decade ago.