Democrat war on women pay equality continues to rage on

Mark J. Perry, both an AEI scholar and an economics professor at the University of Michigan, found that the median salary earned by men was $78,000, which is $12,350 higher than the median female salary of $65,650. 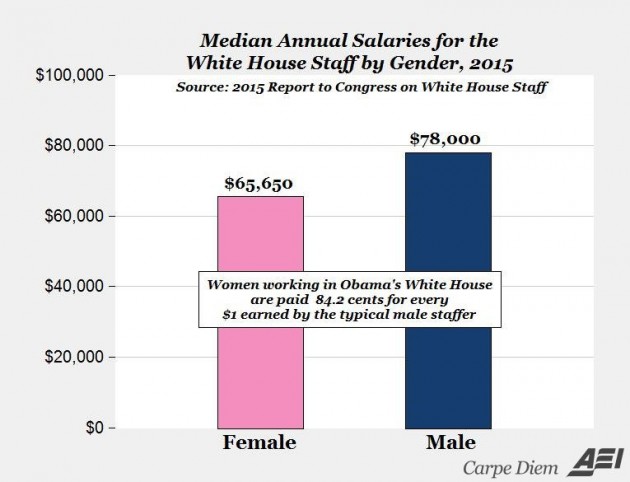 Perry writes on his Carpe Diem blog that the 15.2 percent White House gender pay gap is actually an improvement on the the White House pay gap in 2014 when women were paid 17.9 percent less, but that it is still double the pay gap that exists in Washington, D.C.

The pay gap in the White House is also smaller than the one that existed on the staff of Democratic presidential candidate Hillary Clinton while was a senator. A Washington Free Beacon analysis found that women on Clinton's Senate staff earned just 72 cents for each dollar earned by men.

Perry makes clear that he does not believe the existing White House pay gap to be the result of gender discrimination but rather that the "persistent gender pay gap at Obama’s own White House exposes the hypocrisy of Obama and his wage gap activist supporters."

Studies of raw salary data such as the one performed by Perry and the ones used by politicians such as Obama and Clinton fail to consider the many other factors that could impact salary.

This is not to write off, however, the possibility that gender discrimination is prevalent in the White House.

It was stated by Time magazines's Amy Sullivan in 2011 that "President Obama has a woman problem" and that women on his staff felt like they had to infiltrate the "White House boys club" to succeed.

"Obama himself is responsible for a work atmosphere that marginalizes and ignores women," wrote Sullivan.