There Will Be No Bernie Sanders Delegations on DNC Convention Floor

Maine, Oregon, and other Sanders states relegated to nosebleeds

PHILADELPHIA—Only a handful of state delegations were given floor seats at the Democratic National Convention in Philadelphia—and none of them voted for Sen. Bernie Sanders (I. Vt.).

Unlike the Republican National Convention, where every delegate received a floor seat, the DNC has apportioned floor seats to delegations loyal to Hillary Clinton.

All of the delegations seated on the floor of the Wells Fargo Arena for the 2016 Democratic National Convention are from states won by Hillary Clinton during the primary campaign.

Delegates from Nebraska, Florida, New York, Virginia, Iowa, Arkansas, Illinois, and Pennsylvania are seated in front of the stage in the arena. The former secretary of state defeated Sanders in primary contests in all of those states.

Delegates from Maine, Oregon, Utah, and Rhode Island were given some of the worst seats in the hall towards the back. The delegation from North Dakota, a state won by Sanders, was tucked away in a cavern behind South Dakota, a state held by Clinton. 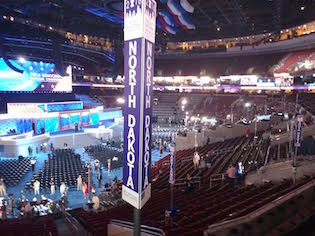 The delegation for Democrats living abroad, a group that voted overwhelmingly for Sanders, is also in the nosebleeds.

The Democratic convention convenes under a cloud of controversy, as thousands of hacked emails from the Democratic National Convention show evidence of pro-Clinton bias on the part of the officially neutral party organization.

Rep. Debbie Wasserman Schultz (D., Fla.) was forced to step down from her role as DNC chairwoman after Sanders called for her resignation on Sunday morning.

Sanders supporters have been a vocal force so far in Philadelphia. Schultz was booed off the stage by Sanders loyalists at a breakfast for Florida delegates. House Minority Leader Nancy Pelosi had Sanders signs thrust in her face as she attempted to speak with delegates from her home state of California.

Other supporters of the Vermont senator were heard chanting "lock her up" at a Monday morning protest in Philadelphia, a slogan coined by supporters of Republican presidential nominee Donald Trump at last week's convention in Cleveland, Ohio.

Press officials from both the DNC and the convention’s communications team did not respond to inquiries about the delegate seating arrangement.

Update 3:02 p.m.: The headline of this post has been updated. A previous version said no Bernie Sanders delegates would be seated on the DNC convention floor. Individual delegates may be Sanders supporters, but the delegations on the floor will vote for Clinton.