A high-profile Elizabeth Warren campaign surrogate has a long and public history of making bigoted and racist remarks against gays, Jews, and Asian-Americans.

The Warren campaign tapped Ashlee Marie Preston, a transgender activist, as a surrogate to promote the campaign in the LGBTQ community after Preston publicly endorsed the Massachusetts senator in June. She appeared as recently as Friday on television to advance Warren’s remarks during the CNN LGBTQ town hall.

Despite her spirited defense of queer people today, Preston has publicly outed a gay man and several trans people online in the past. In one case, the activist provided the personal cell phone number of the person she outed. Preston has also used the term "faggot" in a derogatory manner on several occasions.

"Hit him up if you are bored, need a laugh, or if you are a gay nigga hes [sic] down for wateva, hes [sic] queer. 323-XXX-XXXX," Preston tweeted in 2011. The Washington Free Beacon withheld the number to protect his identity. 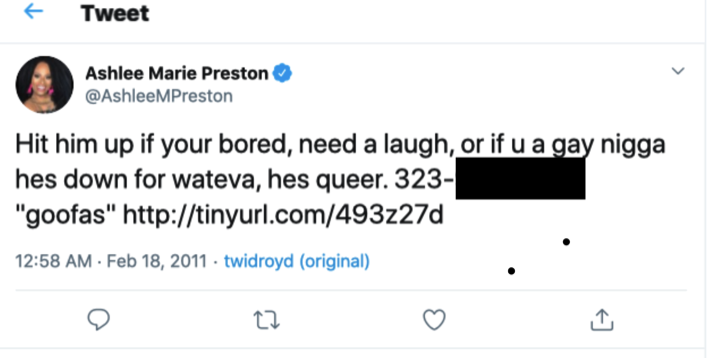 Over the past several years, Preston has also repeatedly blasted out crass, racist views on Twitter. The Warren surrogate has complained that her jeweler is Jewish, that Asians are poor drivers, and that Latinos speak poor English, among her many offensive remarks. In one instance, she proudly wrote that she "broke my phone on this Asian bitches [sic] head."

A twitter user who goes by "OLIVIA ☭ HILL" first dug up the old tweets on Sunday after Preston falsely accused presidential candidate Sen. Bernie Sanders (I., Vt.) of being a no show at LGBTQ+ events for decades. The tweets quickly gained traction, and Law and Crime first reported the tweets on Monday.

Preston has since deleted most of the controversial tweets from her page, even though she wrote in 2011 that "my tweets are forever public. I’ll never make my twitter private."

"I say wildly inappropriate things … but that’s JUST ME," she tweeted.

Preston has since apologized for her comments but argued that the tweets were "resurfaced as a political play" and maintained that she made the comments when she was a vulnerable, homeless meth addict.

"At the height of my meth addiction (8/9 years ago) I made a series of racially insensitive and homophobic tweets. I wasn’t out yet, and was dealing with internalized transphobia while homeless in a neighborhood where I felt culturally inferior," Preston wrote.

Preston—who has recently appeared in several high profile Los Angeles events where she mingled with Hollywood elites—and Warren quickly established a tight relationship during this campaign season. Warren personally met Preston on five separate occasions, according to Preston’s personal Instagram page. The surrogate also introduced her onto the stage at a Los Angeles town hall in August.

The Massachusetts senator has reciprocated Preston’s overtures, using her twitter account to lavish praise on the LGBTQ activist on four separate occasions. Her campaign account also wrote about her twice, praising her as a "Warren Democrat."

"It was lovely chatting with you again this weekend at #EssenceFest, @AshleeMPreston! I’m grateful down to my toes to be fighting alongside you for big, structural change," Warren wrote in July.

Preston considered several different candidates before settling on Warren. Her Instagram accounts show that both Cory Booker and Pete Buttigieg approached her for an endorsement.

Preston said that ultimately, Warren’s "sense of duty and integrity" separated her from other 2020 contenders. Moments before Preston officially endorsed Warren, the senator told her that honesty requires "calling out some pretty ugly stuff."

"If we are going to build the nation we want to have, then it's got to start that we're honest down at the core," Warren said in a video posted to Preston's Instagram. "That means as you said calling out some pretty ugly stuff and then hitting it head-on."

The Warren campaign has not responded to a request for comment.