NASHVILLE, TENN.—Live music booms from the crowded bars on Broadway, the renowned Nashville thoroughfare teeming with pedestrians despite the dreary weather. Packed party wagons mosey past, blaring their own contributions to the unmistakable cacophony of normal people having fun.

A few blocks away, quarantined inside the city convention center, are thousands of people who, in lieu of fun, have decided to pay money to attend something called "Politicon." They have been promised "an unorthodox and highly entertaining weekend of political discourse," and the opportunity to "get up close and personal with political heavyweights (and maybe even interact with a few of history's greatest leaders), while reveling in endless humor and exhilarating conversation." May God have mercy on their souls.

Technically, the organizers weren't kidding about the opportunity to "interact" with history's greatest leader(s), but they might have oversold it a bit. 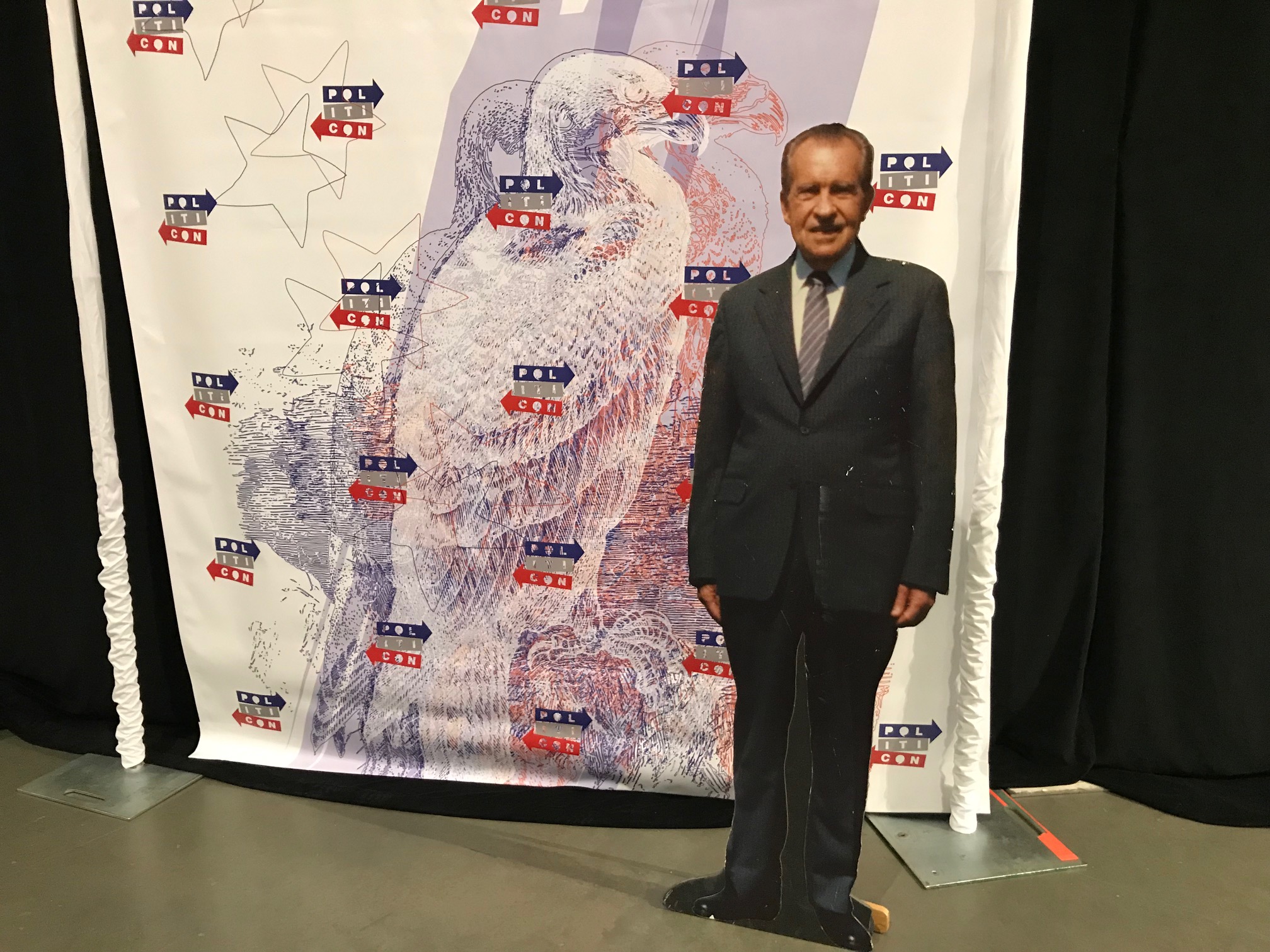 The low-resolution Nixon cutout was but a taste of the scrumptious bounty Politicon had to offer. For example, attendees were lucky enough to witness a history-making debut, as announced in an emailed press release: "BABY TRUMP TO MAKE FIRST SOUTHERN APPEARANCE AT POLITICON IN NASHVILLE THIS WEEKEND." 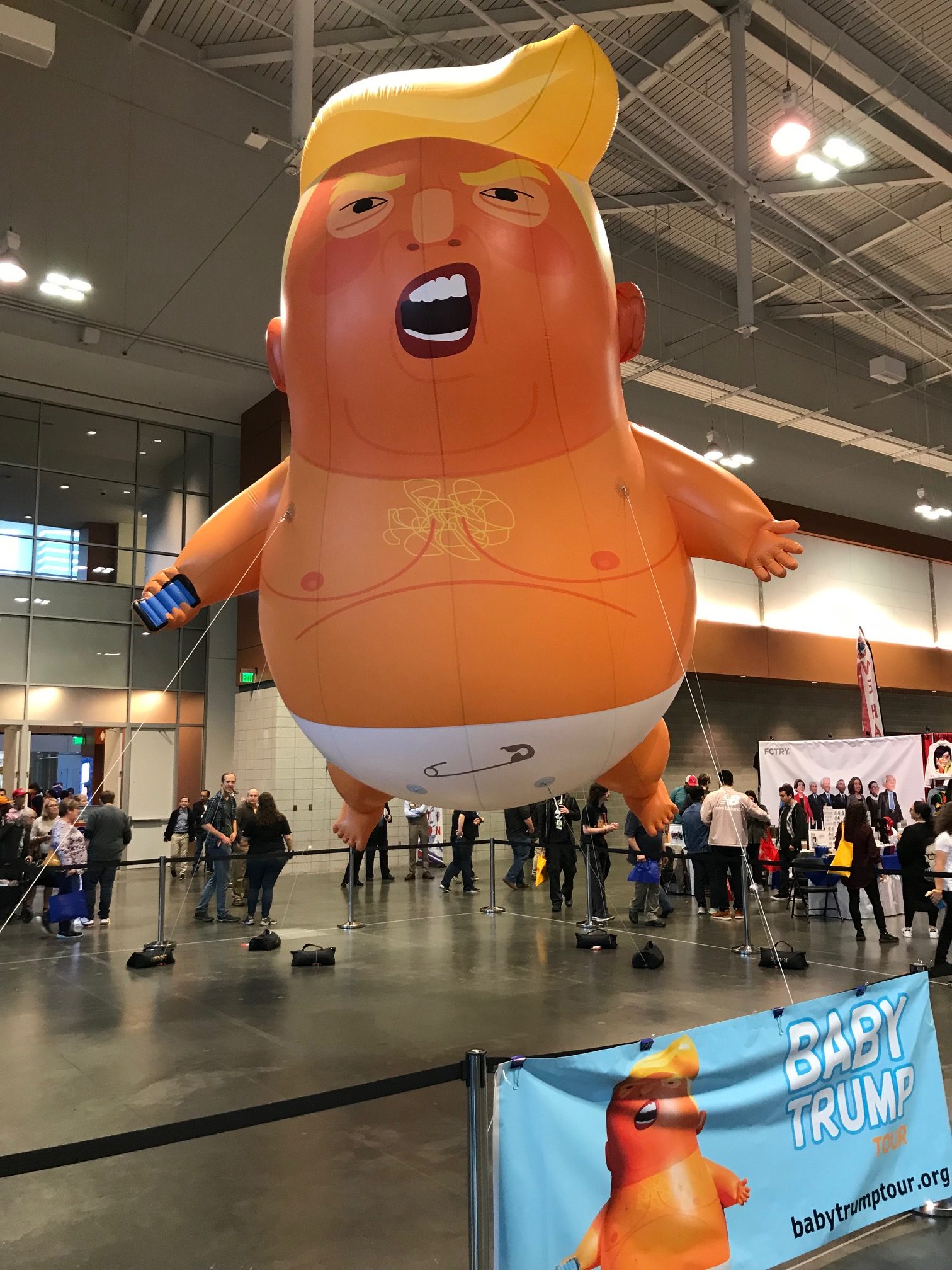 At the opposite end of the convention hall, attendees could marvel at the "Tiny Pricks Project," a public art project inspired by creator and curator Diana Weymar's efforts to relieve her Trump-related anxiety through needlework, in collaboration with Lingua Franca, a boutique fashion line of "sustainably-sourced, fair trade luxury cashmere sweaters." 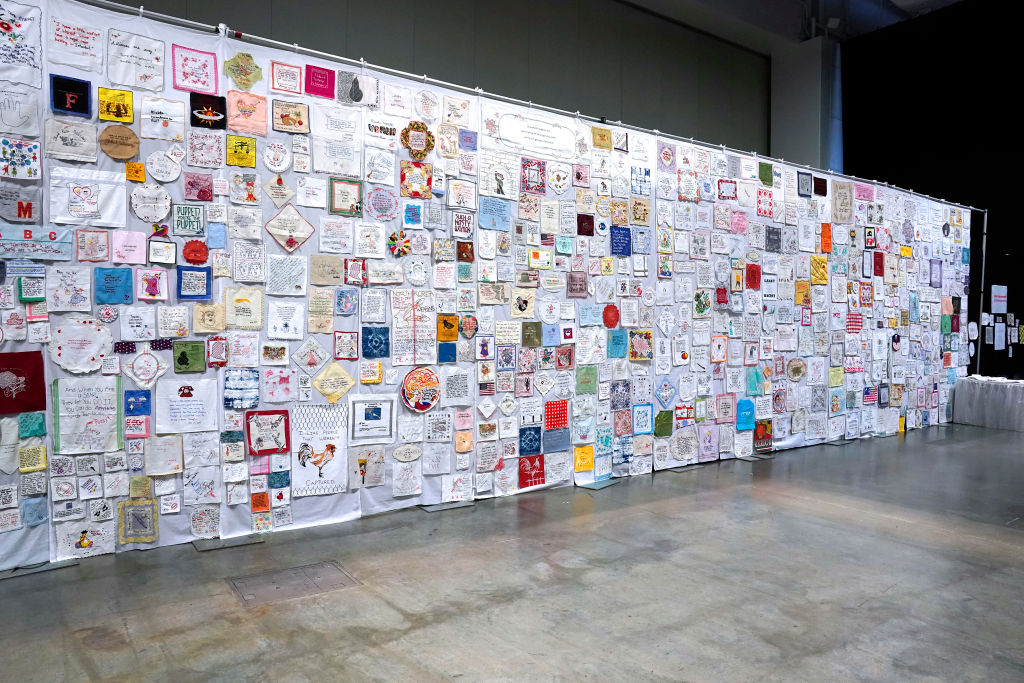 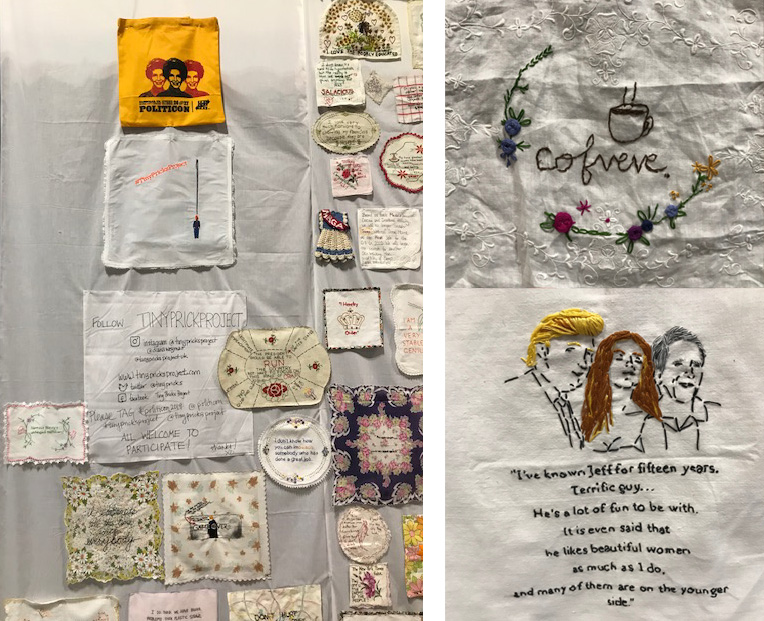 Security at the venue was understandably tight, and unusually thorough. Prohibited items included: "hula hoops," "glow stick or LED gloves," "kites or sky lanterns," and "instruments, musical or surgical." Some restrictions were more rigorously enforced than others, such as the special "cosplay prohibitions" on "masks or other headpieces that cover the entire face." 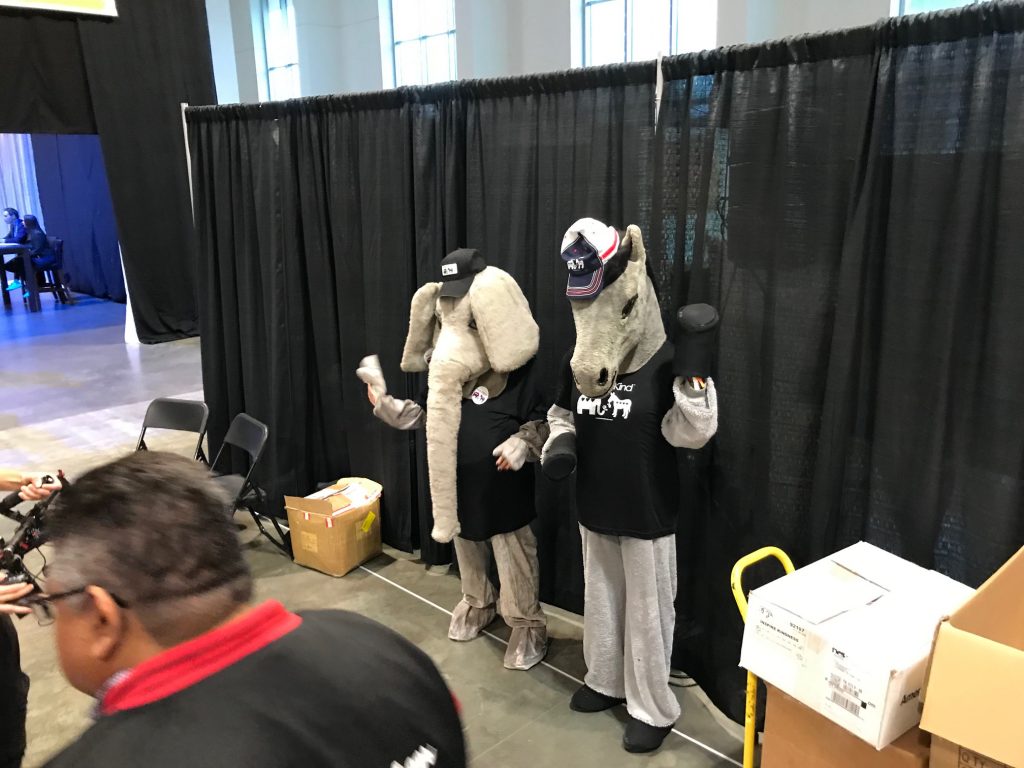 These festive furries were promoting a group called Inspire Kindness, a "lifestyle brand putting positivity center stage" because "In today's world, kindness is one of the few themes that we call [sic] can agree on and rally behind"—a theme the convention organizers attempted to endorse, at least superficially. Several stalls down, in the shadow of Baby Trump, representatives from WeHateLiberals.com sold t-shirts listing all the reasons they hate liberals. Politics!

Attendees of all persuasions walk among the vendors hawking their wares—action figures, calendars, politically themed back braces, and so on. Schlubs for Bernie, lesbians for Trump, hipsters for Tulsi, libertarians for an inflated sense of political relevance. Even the "Purple Party" is represented by write-in presidential candidate Lisa Simpson (yes, like the character), an "omni-partisan, omni-religious peace and love humanitarian" whose platform is "based on the global pop culture demand for Lisa Simpson to run against Donald Trump, as predicted in the March 2000 Simpsons episode ‘Bart To The Future.'" She's selling books on "earth magic," and insists that what's happening in the country these days is "just like the 1960s."

The Politicon itinerary presents an embarrassment of riches that necessitates hard choices, such as whether to leave the "Is America Racist?" panel early to see MSNBC's Nicolle Wallace interview James Comey about leadership. Wallace leads off by asking Comey to recount his conversation with President Trump about the "dossier that may reveal that [Trump] was tinkled on," which tests the former FBI director's uncanny ability to murder even the jolliest of vibes.

Mission accomplished. For a man of such freakish physical stature, Comey is unusually incapable of saying anything of interest. He repeatedly refuses to agree with Wallace that Trump should be impeached, before closing with an extended metaphor comparing racism in America to the nuclear reactor at Chernobyl. No, seriously. Something about "cultural control rods…being withdrawn in coded and not so coded ways…causing the radioactive soup to bubble and bubble…radiation starting to bounce around inside the containment building…" It went on like that for a while.

Watching Sean Hannity debate James Carville might have been somewhat entertaining if Carville, appallingly attired in Marine Corps hoodie and skinny jeans, had been able to muster a coherent sentence. The so-called firebrand had all the enthusiasm of an overmedicated nursing-home resident hoisted onto a shuttle bus against his will.

"They're going to impeach him," Carville says approximately 34 times. 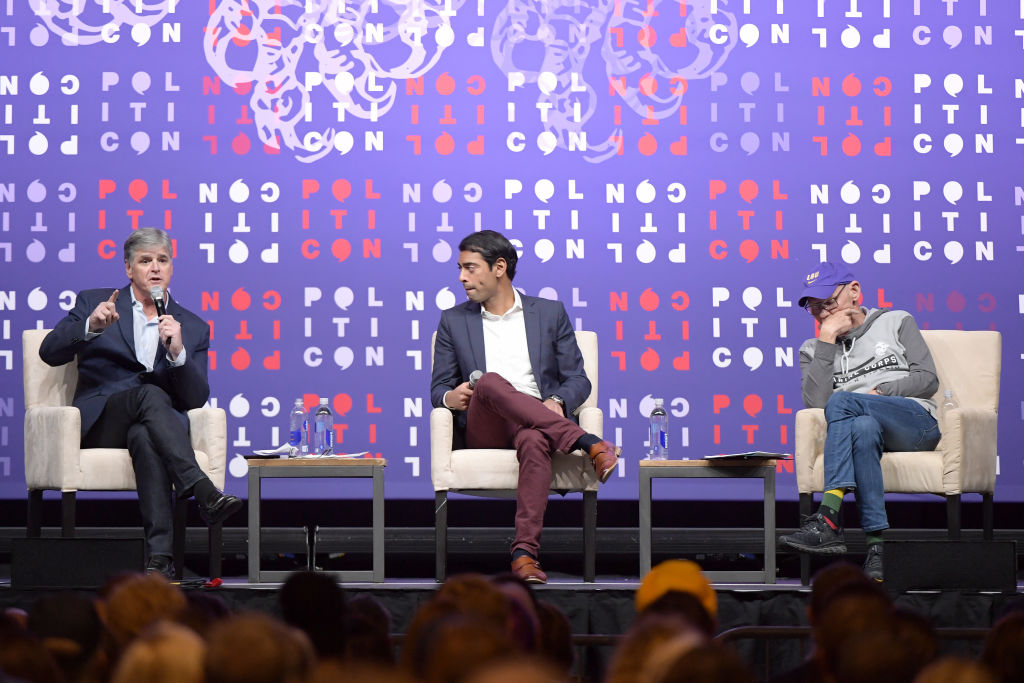 Far more entertaining was the ensuing panel discussion that sought to answer the question, "How The #$@%#! Are We Gonna Get Along?" and decisively concluded that we are not. Conservative icon Tomi Lahren appeared alongside BlazeTV host Lauren Chen, internet pundit Tim Black, and Kyle Kulinski, a cofounder of Justice Democrats. Like seemingly every panel discussion at Politicon, this one steadily devolved into a heated argument about whether Colin Kaepernick is good enough to play quarterback in the NFL.

An excerpt from my brief, yet heated exchange with Tomi Lahren on the subject of @Kaepernick7 peaceful protest and how it was unethically distorted into an attack on our veterans. #Politicon2019 pic.twitter.com/jJu3BKL8ts

All of this, of course, was meant as a prelude to what was billed as Saturday's main event, "An Evening With Al Franken." A sparsely attended affair, Franken's "return to the national scene"—following his resignation (which he regrets) amid allegations of sexual misadventure—was one of the more bizarre events on offer.

It wasn't entirely clear whether Franken's remarks were intended as comedy, or whether he had even prepared remarks at all. His rambling speech consisted mostly of stories about his time in the Senate, along with his impressions of other senators. Judging by the audience reaction, most of them didn't know who Chuck Grassley is, much less what he sounds like.

Wouldn't it be funny, Franken suggested, if the military tricked Trump into believing there was a nuclear Armageddon that destroyed the planet and then kept him locked in an underground bunker for a few weeks before imprisoning him for treason? Again, not entirely clear.

The inevitable heckler reared his head about halfway through the speech, denouncing Franken as "a liar, a fraud, and a sexual predator," then proceeded to vacate the premises. "Ah, don't go," Franken joked, probably, before having second thoughts. "I'm sorry, it's a serious accusation and I take it seriously," he said, before getting on with whatever it was he came here to do.

For the Supreme Court, the Obvious Choice Is the Likely One

Trump to UN: ‘Hold China Accountable for Their Actions’

Trump: It’s My Constitutional Obligation to Nominate a Justice

How Trump Changed the World