Rep. Kyrsten Sinema (D., Ariz.), the Democratic candidate for U.S. Senate in Arizona, said in 2010 that Arizona was the "meth lab of democracy."

Sinema told activists at the liberal Netroots Nation conference that states are the laboratories of democracy before she went on to take a jab at her state.

"As we see in this very quote, that states are the laboratories of democracy and then my state, Arizona, is clearly the meth lab of democracy," Sinema said.

She went on to attribute the quote to former "Daily Show" host Jon Stewart, saying she wished she could take credit for it. "I’m happy to steal it and use it all the time," she added. Stewart referred to Arizona as a "meth lab" several times for what he deemed a series of controversial  laws passed by the state legislature.

This isn't the first time Sinema has been critical of Arizona or its voters. She told the San Antonio Stonewall Democrats in 2011 that people watching in "the past several years" had concluded Arizonans were "crazy" people.

"Over the past several years, people would watch what has happened to Arizona be like, ‘Damn, those people are crazy. Is it something about the water?' No, the water is fine, we stole it from Colorado," Sinema said.

"When we grew up I remember in first grade we learned a song about Arizona," she added. "Arizona is the state of the five C's: cattle, copper, citrus, cotton, and climate. And those were the five things that our state historically made its money off of. But I would add a sixth C, it's called ‘crazy.'"

Sinema faces Rep. Martha McSally (R., Ariz.) this November in the general election. McSally, a retired Air Force officer, was the first woman in U.S. history to fly a fighter jet in combat and the first to command a fighter squadron. 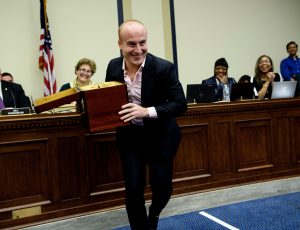 Dem Rep Rips Beto: ‘Losing Is Not As Cool As He Thinks It Is’