On Saturday, the Sanders campaign added self-proclaimed "militant" Phillip Agnew to the payroll as a senior adviser, as the Vermont senator attempts to close the race gap that has propelled former vice president Joe Biden to primary victories in a number of southern states. Sanders called Agnew, who is black, a "gifted organizer" in a release.

"I am excited to welcome Phillip to our team," Sanders said of Agnew, who also goes by the name Umi Selah. "He is a gifted organizer and one of his generation's most critical voices on issues of race and inequity. He has and will continue to push me and this movement to deliver on what is owed to Black people who have yet to experience reciprocity in this country."

A Washington Free Beacon report in January exposed a series of social media posts in which Agnew appears to argue that the U.S. government was behind the September 11 terrorist attacks. Agnew tweeted on the eve of the attacks' ninth anniversary that "Tomorrow America remembers the day that she turned on herself, dismantled her constitution, and killed her own citizens in the name of money." Agnew also shared a cartoon suggesting that American foreign policy caused the attacks in a 2016 Instagram post with the caption "#neverforget what goes round come round."

Tomorrow America remembers the day that she turned on herself, dismantled her constitution, and killed her own citizens in the name of money 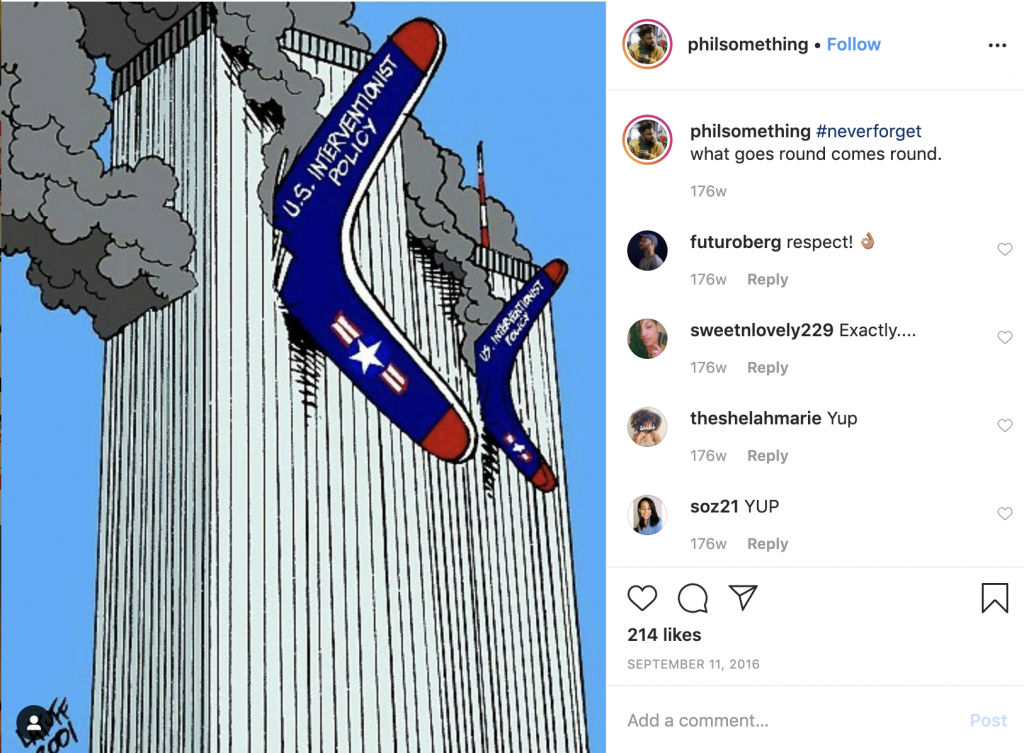 In addition to sharing apparent 9/11 conspiracy theories, Agnew argued that Zionism "is a racist, exploitative, and exclusionary ideology" in a 2015 Ebony magazine article.

"There is no direct line from Zionism to the Black Freedom struggle," Agnew wrote. "No rhetorical imagination-acrobatics can conjure one and no amount of intimidation can chart one. It is a racist, exploitative, and exclusionary ideology."

In the article, Agnew criticized then-president Obama for comparing "the right of the Jewish people to have a homeland and to feel safe and free of discrimination" to "the right of African Americans to vote and have equal protection under the law."

Agnew has also defended the use of violence in the past, saying that "the destruction of property" is a valid way of "starting the conversation" in a 2015 Time essay.

"I don’t see a distinction between violent and nonviolent protests," he said. "What I see is protest."

The Sanders campaign did not respond to a request for comment.

Agnew is cofounder of Dream Defenders, an anti-Israel group that has promoted the Boycott, Divestment, and Sanctions movement, which advocates for the economic boycott of Israel and its people. Dream Defenders has also denounced capitalism, called for the abolition of prisons and police, and advocated for open borders. The group compared itself to the Popular Front for the Liberation of Palestine, a U.S.-designated terrorist organization, in a 2016 document prepared for schools.

"They want to be free from global imperialism. They want liberation. They want equal rights. Just like the Dream Defenders," the curriculum states. It also notes that the Palestinian group's tactics include "hijackings, assassinations, car bombings, suicide bombings, and paramilitary operations against civilian and military targets."

The Sanders campaign has promoted its endorsement from Dream Defenders, and the group hosts phone banks for Sanders twice a week.

Agnew endorsed Sanders in July and has spoken alongside other high-profile campaign surrogates, including Rep. Alexandria Ocasio-Cortez (D., N.Y.) and liberal filmmaker Michael Moore. The activist indicated he would help the campaign with African-American outreach as the Sanders campaign struggles to attract black voters. Former vice president Joe Biden won 71 percent of black voters in the Super Tuesday primaries.

"Our campaign is inclusive of Black people across age, class, and gender lines," Agnew said in the campaign's release. "We've come a long way and more work to do. I'm excited to continue to grow and amplify the work of our Black organizing department."

Sanders's campaign boasts a growing list of anti-Israel figures, including Linda Sarsour, who is a Dream Defenders board member.