The Post gave Minnesota Senate candidate Richard Painter and Center for American Progress president Neera Tanden both "Four Pinocchios" for implying Kennedy’s decision to retire was influenced by his son’s work at Deutsche Bank, a bank Trump has done business with. Painter tweeted a New Republic story speculating about Kennedy’s "shady" relationship with Trump and remarked, "the circumstances of Justice Kennedy’s resignation must be investigated."

This earned him Four Pinocchios, the Post’s designation for the most false statements, or "whoopers."

"It would be explosive if Kennedy’s decision to vote a certain way or to retire was based on Deutsche Bank’s dealings with Trump more than a decade ago. Scratching below the surface, there’s no evidence to justify these theories," fact-checker Salvador Rizzo wrote.

"Standing alone, the tweets from Painter and Tanden are incendiary and worthy of Four Pinocchios. Painter says he wasn’t questioning the Kennedys’ actions. Uncorrected, his tweet leaves a different impression, since it relies on a New Republic article raising questions about the justice, his son and Trump," Rizzo added.

There are a plethora of reasons Painter and Tanden’s theory is implausible. The central charge relies on Trump receiving two loans from Deutsche Bank while Kennedy’s son was an executive there, but the younger Kennedy was not involved in either of those deals. Moreover, Kennedy’s time at Deutsche Bank ended in 2009, long before Trump was a presidential candidate.

The 2005 deal between the bank and Trump that Kennedy was actually involved in shows no evidence of foul play. Kennedy worked at the trading desk and would not have been expected to cooperate directly with Trump in his capacity with Deutsche.

"What the trading desk does is they price the loan … and then once the loan is originated, they figure out what to do with it: sell, syndicate, securitize in a trust," said Mike Offit, who brought in Trump’s business to Deutsche Bank.

The loan ultimately led to some acrimony between Trump and the bank. The bank loaned Trump $640 million to build the Trump International Hotel and Tower in Chicago, and Trump failed to pay $334 million on the loan in 2008. He sued the bank, and they settled out of court in 2009.

The commercial mortgage unit hasn’t done any more business with Trump, and while Trump's relationship with the private banking unit has continued, Kennedy was not involved in any additional loans made by Deutsche to Trump.

The private banking unit loaned Trump $170 million in connection with the redevelopment of the Old Post Office building in Washington (now the Trump International Hotel), according to the Financial Times. Vrablic’s unit also loaned Trump $125 million "to finance the purchase of Miami’s Doral Golf Resort and Spa in 2011, which he re-christened Trump National Doral," according to the Wall Street Journal.

These two loans were made after Justin Kennedy had left Deutsche Bank, by a division of the company where he didn’t work.

The circumstances of Justice Kennedy’s resignation must be investigated by the Senate Judiciary Committee before any replacement is considered. The Constitution does not give Trump the power to use underhanded means to induce Supreme Court resignations.https://t.co/S6m5oLg9mV

His tweet and the story failed to provide any evidence of a secret deal or anything of the sort.

"The connections between Kennedy and Trump, per the New York Times report are surprisingly deep, given the president’s general lack of DC experience—and Trump and his allies exploited them to perfection, encouraging the swing justice to retire before the 2018 midterms, which could return control of the Senate back to Democrats," New Republic's Alex Shepherd wrote.

The Times story Shepherd cited did not demonstrate that Trump or his associated "exploited" connections with Kennedy.

Painter, who has run on a platform of resisting Trump and his Washington "dumpster fire," later backtracked by saying he did not claim Kennedy did anything wrong.

Tanden further promoted the conspiracy. She implied a causal relationship between the younger Kennedy approving a loan to Trump and Justice Kennedy ruling "in favor" of Trump in recent cases, which would be corruption at the highest level.

"Just to state this: Justice Kennedy’s son gave a billion dollar loan to Trump when no one would give him a dime, and Justice Kennedy has been ruling in favor of the Trump Administration position for 2 years as the Court decides 5-4 case after 5-4 case," Tanden tweeted. 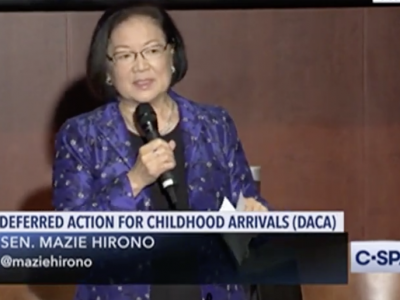