A group of 58 Republican congressmen sent a letter to Supreme Court Justice Ruth Bader Ginsburg on Monday asking that she recuse herself from the proceedings on President Donald Trump's travel ban.

The complaint stems from a series of comments Ginsburg made in July 2016 attacking then-candidate Trump. The octogenarian said Trump was a "faker" and that she dreaded the prospect that he might win the election, saying, "I can't imagine what the country would be with Donald Trump as our president."

Ginsburg eventually apologized. "On reflection, my recent remarks in response to press inquiries were ill-advised and I regret making them," she wrote. "Judges should avoid commenting on a candidate for public office. In the future I will be more circumspect."

But the group of Republican lawmakers thought those comments left Ginsburg unable to avoid an appearance of bias when considering cases involving the president.

"You are bound by law to recuse yourself from participation in this case," the letter reads. "There is no doubt that your impartiality can be reasonably questioned; indeed, it would be unreasonable not to question your impartiality."

"Your participation in Trump v. International Refugee Assistance Project would violate the law and undermine the credibility of the Supreme Court of the United States," the congressmen concluded.

Ginsburg already has participated in the travel ban case to some extent, joining the per curiam opinion Monday that allowed most of Trump's travel ban to take effect, but blocked it from applying to those with preexisting ties to the United States. 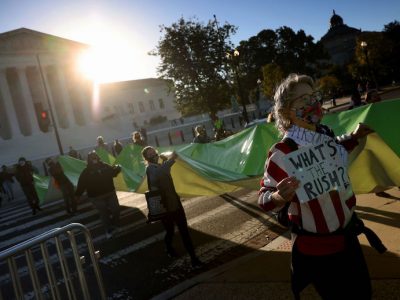