Many Democrats want to use impeachment against President Donald Trump as a key point of their platform in the 2018 midterm elections.

However, Emanuel warned his fellow Democrats against using the "serious legal and constitutional" option of impeachment, according to Axios.

"I lived through the Clinton White House," Emanuel said. "This is a serious legal and constitutional, not political, issue. … I couldn't be angrier at Donald Trump. … That said, you don't just flippantly say: We're for (impeachment)."

Emanuel expanded on his view that impeachment shouldn't be treated as a political tool.

"You don't just treat … the policy standard of impeachment … as a political tool," Emanuel said. "It's a constitutional standard and, when that standard has been met, we'll know about it. … This is a case where the best politics is good policy."

Many Democrats have said that instead of impeaching Trump, the best way to defeat him is at the ballot box. House Minority Leader Nancy Pelosi (D., Calif.) said impeaching Trump is something that Democrats shouldn't pursue but also noted noted roughly one-third of the Democratic caucus supported advancing Democratic Rep. Al Green's (Texas) articles of impeachment in January. 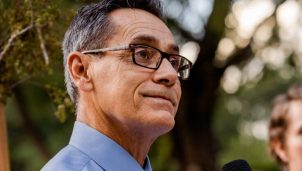