Left-wing protesters went forward with a demonstration Tuesday targeting Sen. Johnny Isakson (R., Ga.) despite organizers canceling the event after learning the 72-year-old, who has Parkinson's disease, had back surgery just days earlier.

The leftist group Democracy Spring Georgia had originally scheduled a "shame march" against Isakson because he "hasn't made an effort to come speak with his constituents," but the organization nixed the protest after discovering the senator had surgery on Thursday, the Daily Caller reported.

The "shame march" was organized around a fundraiser Isakson was expected to attend, but he was not well enough to go because of the back surgery, leading Democracy Spring Georgia to call off its event.

"It would be beneath the standard we are upholding them to if we take to the streets to publicly shame someone who is not fit or well enough to be present for their own shaming," organizers wrote on Facebook.

That did not sit well with some protesters, who were furious that the march was canceled and went forward with their own demonstration.

"Isakson had back surgery but seems well enough to vote in many ways that are a threat to Georgians, use his twitter account, and meet with corporate donors," the protesters wrote on Facebook. They called their protest the "Let's Meet Johnny" rally, rather than the originally planned "shame march."

More than 400 people had RSVP'd as attending the demonstration, according to the Daily Caller.

The creators added that any post wanting to cancel the march or talk about Isakson's health would be deleted from the thread.

"Posts about his surgery, his health, and the desire to cancel the march will be deleted," the announcement read. 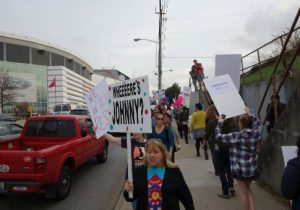 The protesters did not seem concerned about Isakson's surgery on Facebook.

"Pretty sure he doesn't have a spine anyway," one woman said. "Yeah, that was ugly. I own it."

"Maybe he can think about all the people HE consistently has killed, ruined their lives, and destroyed communities while he recovers," one man wrote. "Justice waits for no one."

Another protester suggested Isakson's surgery may have been "a lie to throw the event off."

"It's not that tough of a time to have back surgery while fully insured, when you have paid leave from work, and millions of dollars to pay for rehab and recovery," an activist said.

Isakson's office said in a statement that the surgery was meant to address "spinal deterioration."

"I'm extremely thankful for Dr. Osborn and the wonderful medical team at Emory Saint Joseph's Hospital for their excellent care," Isakson said. "I look forward to returning to Washington with a new and improved back to continue working harder than ever on behalf of Georgians."