Obama for America, the official re-election campaign for Barack Obama in 2012, has yet to pay off its debts, according to FEC records.

Despite raising a record $1.23 billion to defeat Republican challenger Mitt Romney, the president’s campaign has not met all of its financial obligations for services it purchased years after election day.

Obama is regarded as the greatest fundraiser in American political history. In just the last two weeks of the race, Obama raised $88 million and spent $176 million, far surpassing Romney.

President Obama is no stranger to debt. Since assuming office, Obama has added more debt than any other president in American history. The United States possessed $10.6 trillion in outstanding debt on his inauguration day January 2009. As of July 15, 2015, the United States stands at a whopping $18.3 trillion in debt. Obama promised to cut the debt in half and once called Bush 'unpatriotic" for his contributions to total U.S. debt.

The president is not the only politician to run into some trouble with campaign debt. Obama’s 2008 primary challenger Hillary Clinton, who is running again in the 2016 cycle, struggled with campaign debt years after she bowed out of the race. It took Clinton more than four years to pay off over $25 million in campaign debts; at the same time she and Bill Clinton earned an exorbitant personal wealth from paid speeches. Clinton’s campaign became debt-free January 2013.

Obama for America has not indicated why it still has not closed its books, or whether they will maintain their debt for as long as, or even longer than Clinton’s campaign. Exactly two years ago today, the campaign announced it still held $3.5 million, meaning the campaign has only paid off $1 million since then.

Mitt Romney’s campaign committee announced they had no debt less than six months after the election.

To enlarge and view the FEC data, click the image below. 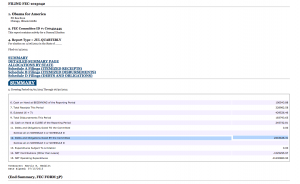