The political action committee that helped cement the rise of the four Democratic congresswomen who eventually became known as "the Squad" has launched a set of Facebook ads fundraising off the recent diversity fiasco at the Democratic Congressional Campaign Committee (DCCC).

The new ads from the PAC, Justice Democrats, follow recent efforts by the DCCC to hide internal conflicts between the progressive and moderate wings of the party.

"The Democratic Party has attacked progressive leaders in Congress for 'making the party look bad,'" one of the ads says. "However, just this week, multiple members of the DCCC leadership have resigned over issues of diversity within the DCCC's ranks." 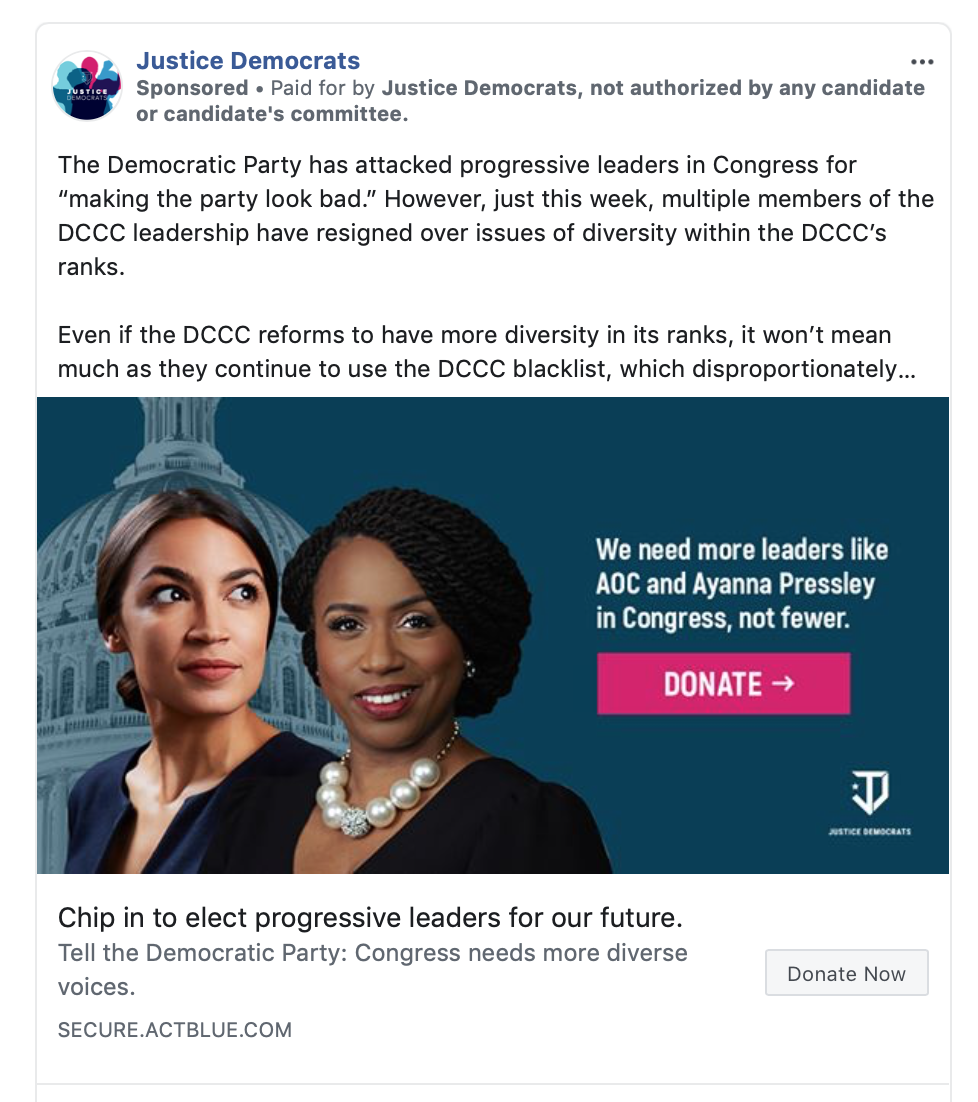 The ad is referring to the forced resignation on Monday of DCCC executive director Allison Jaslow, a white, gay veteran who had once been deployed to Iraq. Five other staffers eventually suffered the same fate, mainly due to demands from two Hispanic Texas congressmen who wanted a "person of color" to be made executive director.

The fallout came after reporting from the Washington Free Beacon revealed homophobic and racially charged tweets from a newly hired staffer for minority outreach, Tayhlor Coleman, who is black.

For example, one of those tweets read, "The vending machine at my center only has Mexican snacks and bebidas. I'm hungry but I'm concerned about safety."

Coleman was not forced out.

After the Free Beacon's report, DCCC Chairwoman Rep. Cheri Bustos (D., Ill.) assured some in her caucus that Coleman was soon to be reassigned, but a follow-up report by Politico contradicted those claims.

"Anyone seeking to divide our party and stoke infighting between Democrats at a time when Donald Trump is in the White House is undermining our ability to protect the majority," DCCC spokesman Jared Smith was quoted as saying in the Politico article.

In early July, House Speaker Nancy Pelosi (Calif.) appealed to all Democrats to smooth out their differences behind closed doors and not through social media, an exhortation widely believed to be aimed at "Squad" members such as Alexandria Ocasio-Cortez (N.Y.).

Justice Democrats has been waging war with the DCCC over a decision earlier this year, also by Bustos, to blacklist any vendor who did business with a Democratic candidate who was challenging an incumbent in the primary.

Such a policy could have hampered or ruined the now-famous primary challenge from Ocasio-Cortez, in which she upset Joe Crowley, an incumbent and member of Democratic House leadership.

"Even if the DCCC reforms to have more diversity in its ranks, it won't mean much as they continue to use the DCCC blacklist, which disproportionately harms young progressives and candidates of color from challenging out-of-touch incumbents," the ad said. "The DCCC won't fight for new leadership in the party, so we will. Chip in to help elect leaders for the future."

The ad buys were smaller than most Facebook campaigns by the PAC, indicating the ads could be market-testing the message. The ads were also launched one day before the news broke that both the chief of staff and communications director for Ocasio-Cortez would be resigning their posts within her congressional office.

The disagreement between the two groups isn't limited to social media feuds or Facebook fundraising.

The Justice Democrats website shows the PAC is supporting four challengers to incumbent house Democrats in the 2020 cycle, and is also backing a candidate running for the Democratic nomination to challenge Republican Sen. Susan Collins of Maine.

Requests for comment to Justice Democrats and the DCCC were not returned.