O’Rourke Questions Relevance of the Constitution: ‘Does This Still Work?’

Asks whether U.S. can 'still be managed by the same principles that were set down 230-plus years ago?'

Former congressman and failed Senate candidate Robert Francis "Beto" O'Rourke questioned the relevance of the United States Constitution in a recent interview with the Washington Post.

In the interview published Tuesday, the Texas Democrat went back and forth on both believing the country is capable and incapable of change.

Throughout the two-hour interview — which was often interrupted by bystanders urging him to run for president — O’Rourke boomeranged between a bright-eyed hope that the United States will soon dramatically change its approach to a whole host of issues and a dismal suspicion that the country is now incapable of implementing sweeping change.

When asked which it is, O’Rourke paused.

"I’m hesitant to answer it because I really feel like it deserves its due, and I don’t want to give you a — actually, just selfishly, I don’t want a sound bite of it reported, but, yeah, I think that’s the question of the moment: Does this still work?" O’Rourke said. "Can an empire like ours with military presence in over 170 countries around the globe, with trading relationships . . . and security agreements in every continent, can it still be managed by the same principles that were set down 230-plus years ago?"

O'Rourke, a possible 2020 contender for the presidency, was unclear what constitutional principles he may want to change.

Democrats have been critical of President Donald Trump for what they perceive as him violating the country's norms and the Constitution.

"Whoever is running may very well be running against somebody who has not the slightest respect for our norms, our traditions, civility, dignity, decency and public life," O'Rourke said in December of Trump.

During his campaign for the Senate, O'Rourke said he wouldn't run for president, but he has since changed his mind and has been contemplating a 2020 campaign. He has received one public endorsement from former Maryland governor and presidential candidate Martin O'Malley. 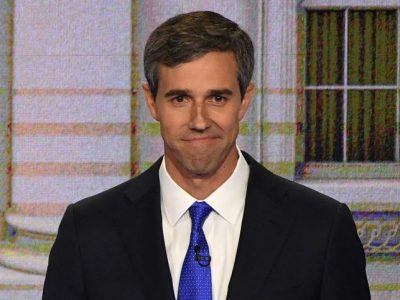