On the Trail With Mike Pence

Feature: It’s as boring as it sounds

PURCELLVILLE, VA.—Would you believe it if I said that the man standing next to me in the orange hat and faux-leather shoes screaming "Pickles!" has been the subject of an FBI investigation?

Both of us are here at Patrick Henry College to hear Indiana Gov. Mike Pence speak. Both of us must have driven past the crowd of 20 or so students huddled near the road with signs that read "PHC is Not Trump Country." I do not think the students were being misleading. Patrick Henry—whose Colonial Revival campus Hanna Rosin once compared to "a Hollywood set of an old Ivy League school"—is a liberal arts college whose 320 students are mostly conservative evangelical Christians. Upon enrollment, undergraduates are required to sign a "Statement of Faith" in which they affirm, among other propositions, "Man is by nature sinful and is inherently in need of salvation." Not the most promising venue to shore up support for a man who told members of the Family Research Council a year ago that he had never asked God for forgiveness.

That’s what Pence is for, I guess. A self-described "born-again, evangelical Catholic" with silver fox good looks and a folksy Midwestern accent, Trump’s running mate is in this campaign to make it easier for people like the kids standing on the side of the Berlin Turnpike to hold their noses and vote for a twice-divorced Hillary Clinton donor who has trouble naming a single Bible verse.

The contrast between Trump and Pence events is instructive. Before anybody says anything, we all recite the Pledge of Allegiance—the real one, not the infamous Trump pledge—and a member of the student body sings "The Star-Spangled Banner." When the event gets underway, Pence is preceded not by his policy adviser but by a parade of local pols and the head of a pro-life organization. Not since Jeb Bush fell flat in New Hampshire have I heard a Republican candidate invite his audience to go online and read his detailed four-point economic plan (there are five points in the version currently on donaldjtrump.com). Until today I thought that Ted Cruz had a monopoly on Margaret Thatcher quotes.

Here are a few things Pence doesn’t mention: China. The Wall. Ivanka’s day care plan. The TPP. Anything to do with race or the acronym "LGBTQ." Instead he talks about the Supreme Court. He makes jokes, but they are lame aww-shucks efforts. Can you guess what a Trump-Pence administration is going to do? That’s right: "unite" the country instead of "dividing" it.

The high-school-sized gymnasium is more than half empty. Above us banners proclaim the college’s nine National College Moot Court championships. Most of the foldable bleachers are leaning unused against the wall to the right of the stage. The crowd doesn’t seem to be representative of the school or its ethos.

When Pence pauses in the middle of a sentence describing Hillary Clinton’s record at the State Department, he is interrupted by the folks behind me. 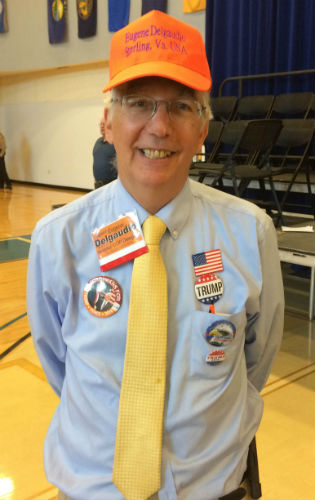 Far and away the loudest person in the crowd is the guy in the hat. He seems thrilled to be here and people seem thrilled to see him. All day people have been shaking his hand. He greets all of them by their first names. They call him "Eugene."

Eugene Delgaudio of Sterling, Virginia (his info is inscribed on the hat), served for a decade and a half on the Loudoun County Board of Supervisors before losing his seat last fall. (A lifelong resident of the county describes Eugene’s constituency to me as "people he met at the grocery store.") In addition to holding public office, Eugene has been the chairman of Public Advocate of the United States, a 501(c)4 group. When the FBI launched an investigation into his financial and personnel-related irregularities, he told the Washington Post that he was indeed using his county staffers to raise money for a local youth football charity.

There are social conservatives and then there is Eugene. A typical press release from Public Advocate calmly asserts that "homosexuals" who "run rampant over the country" are working to create "a nation where police are forced by gay ‘rights’ laws to allow sexual predators like ‘Uncle Ed’ Savitz and Jeffrey Dahmer to rape and murder young boys in the streets."

After waiting patiently for him to finish the conversation he strikes up with another former constituent only seconds after Pence leaves the platform, I ask Eugene whether he has time for a question or two.

When I tell him, he screams the name back at me.

Then another constituent interrupts us to share his experiences from the Republican National Convention with our local hero. Eugene mentions that he narrowly lost a chance to attend himself. "I needed one vote."

I ask him what he thinks about Trump’s gay outreach efforts.

"He’s running a presidential campaign. He’s trying to hijack minorities, women, blacks, homosexuals away from the Democratic Party, and he’s doing a good job of it."

I am doing my best to ignore the spittle on my face.

"He’s kidnapping them." He looks away for a moment and shouts the name of another person he knows in the crowd. Then he asks me whether I need him to repeat his comments.

"Do you want me to repeat that? Because I don’t know if it was even recorded."

I assure him it was and he continues.

"Listen, Free Beacon. It’s a big world out there. I’m fighting the gay rights lobby and the gay rights lobby is mad that Trump is appealing to their constituency and getting large swaths of it to back him. They’re mad: the civil rights bureau, the civil rights movement, the National Lawyers Guild—the various interests of the Black Rights Matter, Black Lives Matter movement has been deflated because Mr. Trump is making a direct pitch to the inner city."

But why does he think he can trust Trump?

"I fear Paul Ryan and Mitch McConnell more than I fear Donald Trump—if you’re talking about betrayal. He is appealing to minorities and so-called open homosexuals, quote-unquote, in the same manner that any elected official or any candidate appeals: on his terms, not their terms."

I thank him for his time. He is not finished.

"You’re a secret publication," he says. "I’m glad they let you out."

I thank him again and turn to go.