Liberal political groups are pushing disinformation campaigns in Texas with misleading mailers and Facebook ads that appear to be from unbiased news sources, an attempt to spread misleading facts about candidates in the final days of the 2018 election cycle.

One of the ads on Facebook, sponsored by a group called "The Voter Awareness Project," has attempted to open up old wounds between President Donald Trump and Cruz from the 2016 Republican primary. The ad says, "Trump’s trying to drain the swamp of do-nothing politicians. Trump says Lyin' Ted Cruz has accomplished nothing for Texas, and he's right," implying Trump and Cruz still oppose each other, despite the president stumping for Cruz last week, according to the Texas Tribune. Trump endorsed Cruz in February 2018 and recently said, "He’s not Lyin’ Ted anymore. He’s Beautiful Ted. I call him Texas Ted."

The neutral-sounding Voter Awareness Project is in fact funded by a "Democratic/Liberal" super PAC that has directed all expenditures against Cruz, according to the Center for Responsive Politics. The super PAC’s treasurer is Markos Moulitsas, the founder and publisher of the liberal blog Daily Kos. While he told the Tribune that this is only a "side project," he said that he wants to make sure voters know "how Trump feels about many of the Republicans running this year." He went on to say that he doesn't believe the ad is misleading because it shows the date of when Trump attacked Cruz, but a researcher of misinformation at Harvard Kennedy School’s Shorenstein Center, disagrees.

"This ad employs a form of information disorder we frequently refer to as ‘false context,’" said Cameron Hickey, a researcher at the center's Information Disorder Lab. "By employing Trump’s Lyin' Ted epithet from the 2016 campaign, without the relevant context that Trump has recently supported and campaigned for Cruz, this ad has the potential to mislead Trump supporters into believing that Trump doesn’t support the candidate today, which he does."

Voter Awareness Project super PAC has spent $403,825 against Cruz as of Nov. 1, according to the Center for Responsive Politics.

The Tribune also reported on groups that masquerade as news outlets on social media, like "Breaking News Texas." Texas' 7th Congressional District is one of the districts affected by this tactic. In a mock broadcast spread as an ad on Facebook, the organization castigated Culberson, saying he "FAILED to prepare Texas for Hurricane Harvey." The ad includes a disclaimer saying the ad was "paid for by EDF Action," although no additional details are available for those unfamiliar with the liberal Environmental Defense Action Fund. 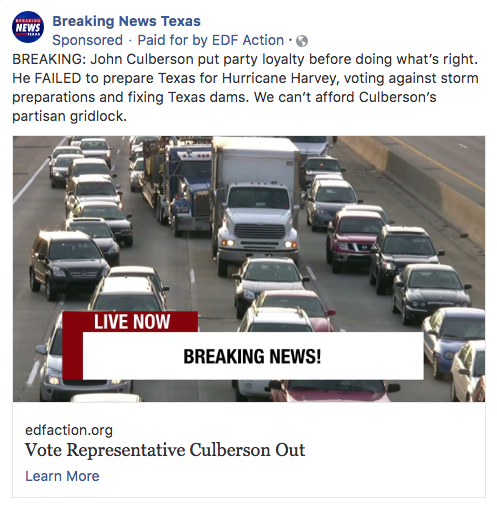 The "Breaking News Texas" About section on Facebook similarly discloses simply that the page is "Paid for by EDF Action, www.edfaction.org, and not authorized by any candidate or candidate’s committee."

"We put ‘Breaking News’ at the top because we want to get Texas voters’ attention to Mr. Culberson’s record of failure on these issues," said Jack Pratt, the fund's political director. He went on to say, "we think the framing is fair and open" and that EDF’s "full disclosure and web address is also on the ad."

The group sent out mailers to residents in the western part of Houston with the names of Culberson and his Democratic opponent, Lizzie Fletcher, along with their supposed policy positions on air pollution regulation, Medicaid cuts, and millionaire tax cuts.

The entirety of the Center for Voter Information's expenditures in the current election cycle have been spent against Republican candidates, according to the Center for Responsive Politics. The center labels the non-profit "liberal."

"While the Center for Voter Information tries to masquerade itself as a non-partisan outfit, it’s clearly a pawn of Nancy Pelosi and the Democrat Party she controls," Communications Director Catherine Kelly said in a statement. "Lizzie Fletcher’s campaign has always hinged on trying to trick voters that she is a moderate, while in fact she is an extreme liberal Democrat who wants to raise taxes and grant citizenship to all illegal immigrants. The voters of District 7 know that Nancy Pelosi’s hand-picked candidate will vote in lockstep with Pelosi and vote to make her Speaker of the House once again."

During the 2018 election cycle, the group has sent out over 270,000 absentee ballot applications across the country and spent over $92,000 against Republicans in Pennsylvania and California. While the liberal group does not disclose its donors, the Center for Responsive Politics shows the group is a vendor of NextGen Climate Action, a political action committee associated with liberal billionaire Tom Steyer. The PAC has made seven payments to the Center for Voter Information totaling over $1.7 million since last October.

Outside of Texas' 7th District, the group's tactics have been the source of confusion and subject of criticism in numerous states across the country, including in Kansas, Iowa, Wisconsin, Minnesota, New York, and Kentucky.