Marijuana dispensaries to open with view of Capitol Dome

Marijuana dispensaries and activists in Washington, D.C., are waiting to see how the Obama administration will react when the capital's first medical marijuana clinics open this spring.

While the D.C. government has approved medical marijuana, it is still illegal under federal law. District-based distributors are hoping to avoid clashes with federal authorities even as some prepare to open shop blocks from the Drug Enforcement Administration (DEA) and Department of Justice.

Capital City Care, a marijuana dispensary with a prime view of the Capitol dome, became the first clinic to obtain its license on April 22. Two others—Metropolitan Wellness Center, located within walking distance of federal buildings in Eastern Market, and Takoma Wellness Center in Takoma Park—are expected to be licensed in the coming days. 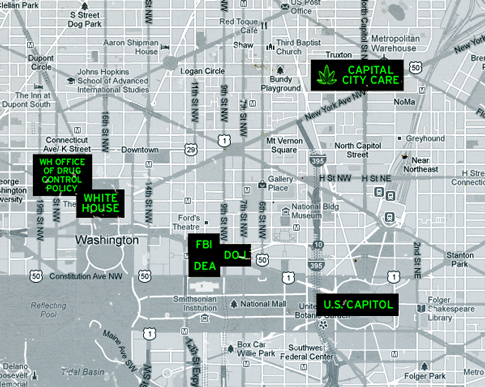 The federal government still considers marijuana a Schedule I substance, and the Obama administration has cracked down on dispensaries in other states.

However, enforcement has been selective, and D.C. distributors to avoid the federal eye by keeping a low profile and staying within district regulations.

"A large portion of the planning that went into this [D.C. medical marijuana program] was with the idea that Congress or the DEA could shut this program down at any time given the fact that it is in the DEA’s backyard and Congress has budgetary oversight and could interfere with the program that way," said Morgan Fox of the Marijuana Policy Project. "So the program was really designed to avoid drawing the ire of any of these people."

Licensed marijuana cultivators are required to stay below the 99-plant-threshold, the level at which federal mandatory minimum prison sentences kick in. The dispensaries have avoided opening up near schools, another federal prohibition.

The program, supporters say, is restrictive. Patients must be diagnosed with HIV, AIDS, cancer, glaucoma, or multiple sclerosis in order to qualify.

"Nationally what we’ve seen is that the places that actually see a lot of interference are places where dispensaries exist in sort of a legal grey area like California and Montana," Fox said. "But places where there are really strict state regulations—and I think D.C. can count as one of those—we really haven’t seen too much interference."

Medical marijuana advocates say they hope this will hold true for D.C. dispensaries.

"Of course we’re concerned. But we try and look at dispensaries they crack down on [in other states] and dispensaries they don’t crack down on," said Rabbi Jeffrey Kahn, who runs the Takoma Wellness Center. "We believe that people who follow the law, our local laws, and act appropriately, and aren't criminals, and aren’t engaged in criminal activity are not being gone after. And we plan to be in that category."

Kahn’s dispensary is a 30-minute metro ride from Capitol Hill and located in a discreet building adorned with a Hamsa, a Kabbalist symbol of protection.

Kahn said the D.C. public is particularly sensitive to outside meddling in local matters because of the unusual relationship between the federal government and the city. Congress still has approval authority over the D.C. budget.

"If there was any federal intervention at this point, it would be wholly disrespectful and unfair to the citizens of the District of Columbia," he said. "We the taxpayers, have spent quite a sum on our health department and our council putting this into effect. So now wouldn’t be the time for the federal government to intervene."

The Obama administration has yet to clarify its selective enforcement policies. Candidate Obama said during his 2008 campaign that he would avoid interfering with medical marijuana programs in jurisdictions protected by local law.

However, legalization advocates say his record in office has been mixed. Federal authorities have raided more than 100 dispensaries, including in states such as California and Arizona that have medical marijuana programs.

"What I specifically said was that we were not going to prioritize prosecutions of persons who are using medical marijuana," Obama told Rolling Stone last April. "I never made a commitment that somehow we were going to give carte blanche to large-scale producers and operators of marijuana—and the reason is, because it's against federal law."

Kahn said DEA and Department of Justice employees have unofficially attended public forums about the D.C. program, but he has not personally reached out to the administration for guidance on the law.

Some say the administration may have a political reason to stay silent. Polls have shown a majority of the American public supports medical marijuana.

"I can understand how it might seem that it’s almost like a slap in the face to [the administration] having it be so close and on Capitol Hill, but I think that location is actually protecting [the dispensaries], because [a federal raid] would draw national media attention," Fox said. "They’re not going to win any popularity points by cracking down on dispensaries in a very, very visible manner in the nation’s capital."

The city of D.C. is also being cautious. It required prospective dispensaries to sign a form acknowledging they would be violating federal law and absolving the city of legal responsibility.

The cautious approach from the city and the dispensaries has caused a schism in the D.C. marijuana advocacy movement.

Eidinger abandoned his own plans to obtain a distribution license because his organization did not want to sign the city’s waiver.

He said the local government has weakened the program in order to satisfy Obama administration and law enforcement and has allowed politically connected dispensaries to corner the market.

"The government is getting in the way of this program," Eidinger said. "If you really care about letting an industry blossom, you don’t write all these regulations. [That would] just shut the industry down before it even started."