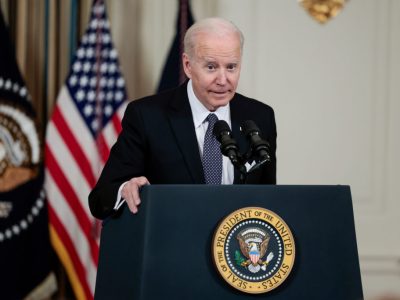 The bipartisan infrastructure bill includes a provision that would require auto manufacturers to equip "advanced alcohol monitoring systems" in all new cars.

Buried in the massive proposal—which is already longer than 2,700 pages—is a section titled, "ADVANCED IMPAIRED DRIVING TECHNOLOGY," which mandates new vehicles include "a system that … passively and accurately detect[s] whether the blood alcohol concentration of a driver of a motor vehicle is equal to or greater than the blood alcohol concentration" of .08, in which case the system would "prevent or limit motor vehicle operation." Automobile manufacturers would have a three-year grace period to comply with the regulation.

The provision gives ammunition to Republican critics who say the scope of the bill expands far beyond bridges and tunnels. Sen. Josh Hawley (R., Mo.) said he would oppose the bill over its subsidies for green energy, while Sen. Mike Lee (R., Utah) questioned whether the federal government could efficiently allocate more than $1 trillion in spending. Meanwhile, a number of House Democrats say they oppose the deal for not doing enough. Rep. Alexandria Ocasio-Cortez (D., N.Y.) attacked her partymates in the Senate for compromising with Republicans.

"It certainly looks like this opens the door for mandatory breathalyzers in every new car. It's crazy," said one senior Republican aide, who requested anonymity to speak candidly due to ongoing negotiations in the Senate.

Although the exact type of alcohol monitor the bill would require is unclear, passive alcohol sensors are described in a report by Mothers Against Drunk Driving (MADD). The group recommends "driver monitoring systems, touch-based systems that can read your blood alcohol concentration through your fingertips and air-sampling systems that can test and isolate just the air exhaled by the driver." MADD president Alex Otte praised Senate negotiators for using the infrastructure bill as a vehicle to pass the group's "most significant" legislative push in recent years.

"We cannot wait any longer to establish a standard for impaired driving prevention technology that can be deployed on all new vehicles," Otte said in a statement. "This legislation will mark the beginning of the end of drunk driving."

MADD paid lobbying firm ML Strategies $40,000 in 2021 to influence Congress on regulations concerning the automotive industry. Christian Fjeld, vice president of ML Strategies and MADD’s lobbyist on the issue, spent nearly a decade working with Democratic leadership on the Senate Committee on Commerce, Science, and Transportation, including former senator Bill Nelson (D., Fla.), who is now NASA chief for the Biden administration.

Intoxalock, a company that manufactures vehicle breathalyzers, has also spent heavily on lobbying in the past five years. It has spent more than $900,000 on lobbyists since 2017, according to the Center for Responsive Politics, including $40,000 to Crossroads Strategies in 2021. The firm boasts many employees who have worked in the federal government, the House of Representatives, and the Senate. Jason Gleason, executive vice president of Crossroads Strategies and one of the firm's numerous lobbyists working with Intoxalock, previously served as chief of staff for Rep. John Sarbanes (D., Md.) from 2009 to 2018. Gleason also served on the staff of former senator Paul Sarbanes (D., Md.) from 2001 until 2007.

Neither Intoxalock nor the lobbying firms returned requests for comment.

According to the bill, new technology would "prevent or limit motor vehicle operation if a blood alcohol concentration above the legal limit is detected." One senior Senate staffer familiar with the bipartisan infrastructure agreement negotiations said most lawmakers were likely unfamiliar with the provision, noting that most senators hadn’t even read the bill.

The bill has yet to pass the Senate, although it cleared several key procedural hurdles in July. Senate Majority Leader Chuck Schumer (D., N.Y.) said a final vote on the bill could happen as early as Wednesday, but Minority Leader Mitch McConnell (R., Ky.) has asked for more time to review its final language.