Louisiana Republican Ralph Abraham is using his authority as a medical doctor to assure voters through a new ad that "there are only two genders."

The ad from Abraham, the Republican frontrunner in the battle to face Louisiana's current governor, Democrat John Bel Edwards, states a series of "truths," including that "life begins at conception," "government is too big," "taxes are too high," and "facts matter more than feelings."

The one that will likely receive the most attention comes at the end of Abraham's ad.

"And, as a doctor, I can assure you there are only two genders," he says, highlighting a key point of contention between him and the current governor.

Edwards, the current governor, in 2016 issued an executive order that mandated state businesses to accommodate employees who choose to identify as a different gender than the one they were born with. The Louisiana Supreme Court ultimately deemed his executive order unconstitutional and ruled against him.

Edwards was first elected in 2015. Abraham is currently a member of the U.S. House of Representatives.

Abraham has emerged as the frontrunner in the Republican field of candidates, who will all appear together on the ballot along with Edwards in October. In Louisiana's jungle primary system, the two leading candidates face off in a run-off in November unless one candidate receives an absolute majority.

Another issue raised by Abraham in the ad is the cost of car insurance, which he says is too high. His campaign points to statistics showing that Louisianans pay the second highest car insurance premiums in the country. 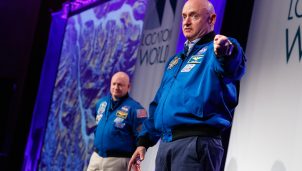