CARSON CITY, Nev.—Not far from Lake Tahoe, just around the corner from the Comstock Casino, within two miles of no fewer than nine trailer parks, is a resort owned by a U.S. senator.

It bills itself as a resort, anyway.

Democrat Sen. Mark Begich’s home state of Alaska is proudly not of the mainland. "Outsider" is a political epithet in Alaska, one Begich has used against Republican challenger (and former state attorney general) Dan Sullivan.

So the Carson Hot Springs Resort sticks out among Begich and his wife’s other business interests, which include a few real estate holdings, a coffee company, and an airport gift shop and bookstore—all based in Alaska.

Carson City locals seem to enjoy the resort, if its informational video and a few Instagram selfies are any indication.

Begich is said to have discovered the hot springs between stints as an assemblyman and mayor of Anchorage. In the late 1990s, he and his wife took a road trip through California, stopped in Nevada, and visited the site.

Its owner nearly tripled the acreage in 1998, when the Reno Cellular Telephone Company signed over just under four adjacent acres free of charge.

The next year, Begich bought the six-acre plot of land "with the goal of bringing it back to its glory days," according to the hot springs’ website. His company, Carson City Holding LLC, paid $1.5 million, nearly ten times the property’s assessed value at the time.

Carson City Holding was formed in March 1999, two months before Begich purchased the hot springs. It is incorporated in Nevada, which has no franchise tax or corporate income tax.

One of the partners in the company is another firm called Hot Springs I LP, incorporated in Nevada in September 1998.

Begich and his wife jointly own Hot Springs I LP.

The senator has since been criticized for giving his D.C. address to the Federal Election Commission for the purposes of campaign reimbursements, even as he and other Alaska Democrats hammer his Republican opponent for his ties to the lower 48.

As Begich assumed ownership of the hot springs and began renovating the property, his mother assumed a managerial role. But that only lasted a couple years, she said.

Since Begich bought the property, those records show, it has been forced to shell out more than $5,300 in penalties due to late tax payments.

And Begich’s dream of bringing the resort "back to its glory days" did not go as planned.

A month before Begich bought the hot springs, the Pit Stop Bar and Grill, located next to the hot springs and owned by the man who sold the parcel to Begich, had its liquor license revoked for failing to pay quarterly fees to the city.

The next year, after buying the property, Begich rented the space to an establishment called Joe Bob’s Roadhouse.

Carson City sheriff Ken Furlong remembers the subsequent years as "a challenge." During a visit to his office, he handed me a four-page spreadsheet detailing his office’s routine visits to the bar for incidents both violent and more mundane.

The list only went back to 2004, five years after the bar opened.

One of Furlong’s captains remembered responding to an assault case that took place in the parking lot adjacent to both the bar and the entrance to the spa. That, apparently, was a frequent occurrence.

By the time Joe Bob’s closed shop, city officials were fed up with what they described as all-night partying and a drain on the local police force.

At a 2009 meeting of the city’s board of supervisors, Sheriff Ken Furlong, also a member of the board, expressed concern about "bar-related activity which typically requires the attention of Sheriff’s Office personnel between 12:30 and 3:00 a.m.," according to meeting minutes.

Furlong also discussed numerous confrontations inside the bar that had spilled out into "parking lot incidents," and to which his office had been forced to respond.

Town supervisor Molly Walt "reiterated her concern over the bar remaining open until 6:00 a.m., and related an experience of her husband’s with regard to violence at the previous establishment."

In 2009, after Joe Bob’s shut down, a Reno native named Ayo Odunsi opened a new establishment on the site called Club Envy. He promised to strictly police underage drinking, hire additional security, and ban troublemakers from the premises.

They hoped he was right. 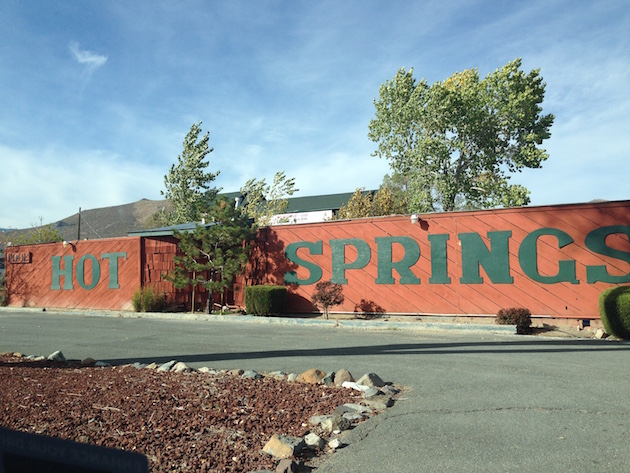 Much to my dismay, a vacant shell of a bar greeted me when I pulled into the parking lot of the Carson City Hot Springs Resort.

"HOT SPRINGS" blared a sign on the side of the facility, black text over red wood, fitting with Carson City’s frontier feel.

Half a dozen cars took up minimal space in the large gravelly lot.

I strolled past a Toyota with California plates and an "ABOLISH THE IRS" bumper sticker, took a right at what had once been Joe Bob’s Roadhouse, and entered the resort.

I was determined to explore the full range of this spa’s offerings.

A friendly 20-something woman greeted me. She was the only non-maintenance employee I’d see at the facility. I’d have to go without the hoped-for massage, which I later learned is available only by appointment.

I asked about the private spa rooms.

"What do you suggest?"

The spa boasts some of the cleanest natural spring water in the country. It’s pumped from springs tens of thousands of feet underground. The resort’s website touts numerous health benefits from its natural mineral contents.

I had the private spa to myself for two hours. But with not much to do but sit there, I decided to wander out into the pool area. 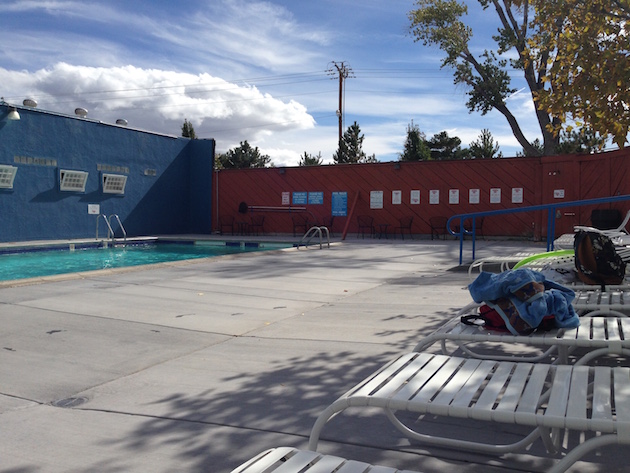 As I walked through less-than-immaculate hallways, past a pool cleaner who smelled like he’d spent 50 years marinating in Marlboro smoke, I realized I hadn’t brought flip flops.

I tried not to think about what was on the floor.

I entered the pool area only to find a sparse crowd: five or six people.

The facility is not as touristy as its name would suggest. I started getting curious looks as I snapped dozens of photos of the pool area.

The hot springs "are not a resort, by any stretch of the imagination," one travel blogger has observed. "Instead, they provide a place for locals and average-income families to enjoy a day of soaking without going broke."

Indeed, while I’d hoped to stay in what I understood were motel-style rooms at the resort, the woman at the front desk informed me that it no longer offers lodging.

With the vacant bar, that meant that two of the three commercial spaces on the property were not in use.

As it happens, a restaurant called Sassafrass is leasing the bar from Begich’s company and opening for service in December. Had I come a few months later, I might’ve enjoyed a post-soak meal and a cold beer. Instead, I filled a bottle from a tap being pumped from 35,000 feet underground and took my leave.

A subsequent blackjack run at the Comstock did not go as I hoped it would, so a bit of a U.S. senator’s mineral-rich water from his disheveled resort was my only souvenir from the trip. Still, I felt like a winner. Will Begich feel the same way on Wednesday?

If he doesn’t, he can always retire to his hot springs.