A new video of U.S. celebrities urging electors to vote against President-elect Donald Trump was made by an organization whose website was registered in a foreign country, despite its accusations that foreign influence was to blame for Trump's victory in the presidential election.

The video, released on Wednesday by a group called Unite for America, is framed as a public service announcement with celebrities such as Martin Sheen, Debra Messing, and James Cromwell begging Republican members of the Electoral College to cast their votes against Donald Trump on Dec. 19.

"They're not asking you to vote for Hillary. 37 Electors can be American heroes by voting their conscience for a real leader," the group says on its YouTube page. It is the first and only video uploaded by Unite for America.

The group's website, UniteForAmerica.org, describes the organization as a "multi-partisan movement" of "concerned citizens, organizations, unions and grassroots networks formed in the wake of the 2016 Presidential Crisis."

"Trump's unprecedentedly unqualified administration, Russia's confirmed interference, and the associated business conflicts of interest are an affront to the core American values that Republicans, Democrats and Independents have historically fought to protect," the website states.

An image on the Unite for America Facebook page shows the face of Russian President Vladimir Putin and asks, "Is this your president?"

The Unite for America website does not contain much information about the group or its members. It also does not list an address or phone number. In order to contact Unite for America, a form must be submitted through its site.

Despite the group's reference to alleged foreign influence in the presidential election, a trace of the group's URL shows that its website was registered in a foreign country.

According to a search on ICANN WHOIS, a website that provides public access to data on registered URL names, UniteForAmerica.org was created on Nov. 26 with internet service provider Tucows Inc., located in Toronto, Ontario, Canada. 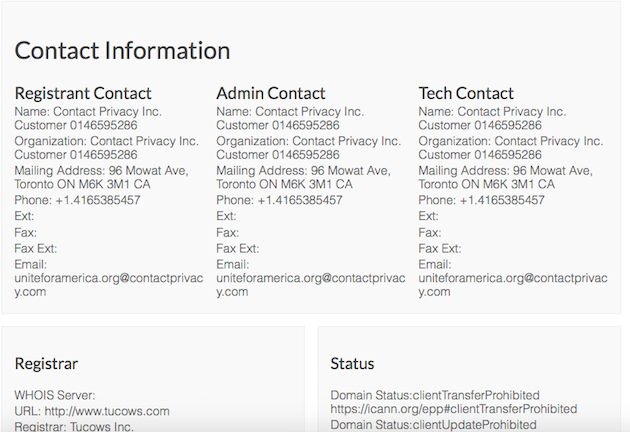 It is unclear if Unite for America is a foreign group. The organization did not respond to requests for comment through its website.

The video is the latest in a string of recent attempts to pressure Electoral College members to rebel against Trump.

A group of 51 electors recently called for a briefing on Russia's influence on the election. The electors seeking the briefing are overwhelmingly Democrats, including the likes of Christine Pelosi, daughter of House Minority Leader Nancy Pelosi (D., Calif.). Only one Republican is on the list of 51 electors.

That elector, Chris Suprun of Texas, was the first Republican to publicly state he would vote against Donald Trump. Suprun is working with Megaphone Strategies, a "social justice" public relations firm founded by liberal CNN contributor Van Jones.