A video journalist who worked for the New York Times for seven years is now working for Hillary Clinton’s presidential campaign, according to campaign disclosure forms.

Vijai Singh, who worked for the New York Times from 2007 to this year, has been working for the Clinton campaign since at least May, according to the campaign’s quarterly Federal Election Commission filing.

Singh’s work at the New York Times was not always political in nature, but she has worked in politics before.

Her LinkedIn profile reveals that Singh had worked as a press intern in Clinton’s Senate office in 2003.

Singh first appeared on the campaign’s payroll on May 29 and remained on the payroll throughout June.

In addition to working for the campaign, Singh has also stepped up as a donor. She made a $220 contribution to the campaign on June 8, listing her occupation as a "producer" for Hillary for America.

Whether or not Singh was already working for the campaign earlier than May, her Twitter account makes it clear she was already a supporter.

She tweeted the campaign’s launch video on April 12 just minutes after it was posted by the campaign.

Singh also was present for the campaign’s launch event in June in New York City, and appears to have worked on the official video of the event. 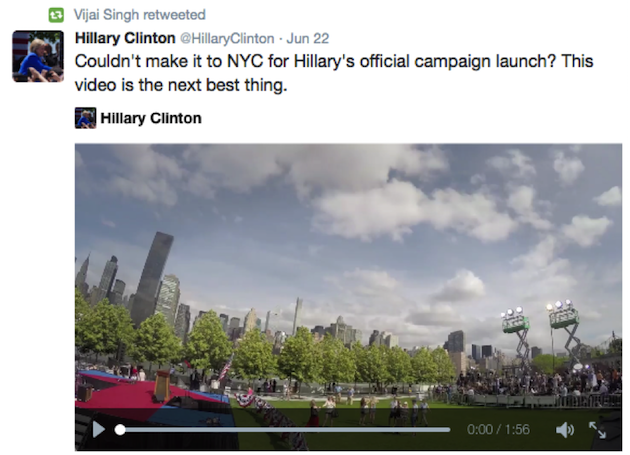 The relationship between the New York Times and the Clinton campaign came under additional scrutiny on Friday morning when it became apparent that the paper’s breaking report of a potential criminal investigation involving Clinton was amended due to pressure from her campaign.

The editor of the New York Times’ editorial page also stated this week that he has no issue with Clinton’s strategy of avoiding the press.

The paper has also been criticized for running pieces about Clinton’s Republican opponents such as Sen. Marco Rubio (R., Fla.) that were based on research provided by Clinton allies.