President says Manchin is not a reliable vote at W.Va. rally

Trump supporters who gathered at the Huntington Tri-State Airport were optimistic about Patrick Morrisey's chances of upsetting the Democratic incumbent on Tuesday. Some stood in line as early as 11:45 a.m. Friday, more than four hours before the rally began.

Allegiance to the president's agenda was on the minds of supporters, many of whom are former Democrats. The audience was full of them, some personally convinced to change parties by the president himself, like Gov. Jim Justice and Dorothy McPhee.

"I have been a Democrat sixty some years of my life," said Dorothy, who grew up in Winfield County. "I switched over a couple years ago to Republican because I no longer can tolerate the Democratic stand on a lot of things."

Dorothy said the most important issues to her are the economy, taxes, immigration, "draining the swamp," and the opioid epidemic.

She said Morrisey and Manchin both benefited from pharmaceutical companies, with Morrisey's prior lobbying work, and Manchin's big dollar donations from Mylan, the controversial EpiPen maker whose CEO is Manchin's daughter.

"But at least Morrisey will stand with the president," Dorothy said. "Joe waffles on everything. And I don't want that."

Once thought unlikely to unseat the popular West Virginia Democrat and former governor, the race has tightened in recent days. Morrisey, the state's attorney general, says he has climbed within the margin of error, a polling boost many Republicans saw after the Brett Kavanaugh hearings.

While Manchin ultimately voted for the Supreme Court nominee, Trump is still using the vote against him. The president recounted Manchin told him he "may" vote for Kavanaugh, but the Democrat waited to publicly support the judge until his confirmation was all but a certainty.

"There's nobody smoother than Joe," Trump said. "And he pressed that button, but I think it was about one eighth of one second after we had the final vote [needed] from Susan Collins."

Trump told the estimated 6,000 in attendance Morrisey would be a key vote for lower taxes, strong borders, and ending the war on "clean beautiful coal."

For his part, Morrisey said he would be a "strong conservative fighter for President Trump," versus Manchin, who he repeatedly calls, in Trumpian fashion, a "dishonest Washington liberal."

"Sen. Manchin has abandoned our West Virginia conservative values," Morrisey said, appealing to the state Trump won over Hillary Clinton by 42 points. "On the issue of life, he thinks it's a multiple-choice question."

Both Trump and Morrisey hit Manchin for his support of Clinton, even after she bragged about planning to put a lot of coal miners out of business. Supporters waved their "Trump Digs Coal" campaign signs, a noted addition in coal country to the usual "Women for Trump," "Drain the Swamp," and "Keep America Great" signs seen at rallies.

Some supporters traveled far to see the president, like Dennis Egert, a lifelong Democrat, union member, and veteran turned "Biker for Trump." Egert supported Obama twice before switching over to the Republican Party for Trump in 2016.

Egert lives in Harrisburg, Penn. He says his wife, who has congenital heart disease, lets him come to the rallies by himself. Though he didn't travel on his bike, this time. It's in the shop.

"Obama made me vote for Trump," Egert said of the former president, who is waging a campaign blitz of his own. "I followed him hook, line, and sinker. The stuff he was saying to me, it wasn't happening for me."

A small handful of anti-Trump protesters were spotted before the rally, but they never got anywhere close for the president to see their handmade "The Lyin' King," and "F*** Trump" posters. The small staging area on the side of the road a mile outside the airport did draw the attention of some local media. 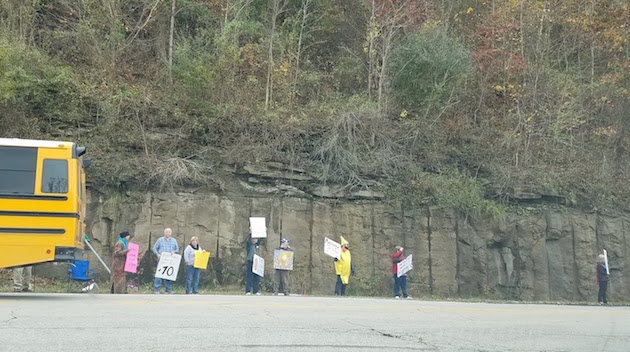 On the other side of Highway 64 Trump fans were arriving at Camden Park, West Virginia's sole amusement park, whose rickety roller coaster was empty because the park is not open most days. The park was being used as an overflow parking lot for the rally, as hundreds of supporters browsed gear from MAGA entrepreneurs before climbing into school buses for a 10-minute ride to the show.

Security lines were short at 1 p.m. but a steady flow of people continued to fill the Hangar until Air Force One landed a little more than three hours later.

Once inside, supporters perused official MAGA campaign gear ("Space Force" t-shirts appeared to be a hot item) and passed the time between speeches from local politicians and another blasting of a Rolling Stones song.

Bishop was also a Democrat for many years, but his political transformation happened in the Reagan era.

"I was just out back at this building, hiring in with a new contractor, it's a five-year contract because of this economy, because of what [Trump's] done," said Bishop, a West Virginia native whose father was in the coal business. "Life is good and it's all because God is good."

Two friends who supported Manchin during his last election both now back Trump. One said she is still on the fence about voting for Manchin, the other, said she will cast her ballot for Morrisey on Tuesday.

"The economy is the number one issue," said Angie. "I think the president is doing really, really good with the economy, and helping a lot of people get jobs."

Angie said she would no longer support Manchin because she does not trust him to be a reliable ally to the president.

Dorothy couldn't wait, and was one of the more than 120,000 West Virginians to vote early. And it was clear her decision to pull the lever for Morrisey was impacted by a man whose name is not on the ballot.

"Well, there isn't anything I don't like about him," she said when asked what she likes about Trump. "Now, sometimes he gets a little irritating with his tweets and maybe it's not the things I would want to tweet, but I don't mind that at all. And I think he's trying to fulfill his promises to the American people.

While Trump certainly would approve, during the rally he reminisced that there is "something nice" about showing up on Election Day, rather than early voting.

"In West Virginia, you tend to vote on Tuesday more so," Trump said. "We're all old fashioned. That's why we get along."