David Brock, the liberal activist who directs the pro-Hillary Clinton Super PAC Correct the Record, had many choice words for the former secretary of state and her husband, President Bill Clinton, in the articles he wrote for the American Spectator in the 1990s.

In "Living With the Clintons," the January 1994 piece for the conservative monthly that broke the scandal later known as "Troopergate," Brock called President Clinton "a man of gargantuan appetites and enormous drive, and not only in relation to women" before quoting a police officer’s unflattering story about Clinton’s eating habits:

"When he would eat an apple," said Roger Perry, a stout 6’ 2" chain-smoker who does not seem easily offended, "he would eat the whole thing, core, stem, and seeds. He would pick up a baked potato with his hands and eat it in two bites. I’ve never seen anything like it."

He also quoted an Arkansas state trooper who remembered Hillary Clinton saying to her husband, "I need to be f—ed more than twice a year" and, in reference to an alleged mistress, "Come on, Bill, put your dick up. You can’t f— her here."

In "The Travelgate Cover-Up," a June 1994 cover story that featured a drawing of the then-first lady dressed up as a witch riding Air Force One as if it were a broomstick, he referred to the couple’s "influence-peddling and sleazy deal-making" and claimed that "Screwing over the ‘little people’ is the Clintons’ prerogative." He also put scare quotes around "strong moral compass" in reference to Hillary Clinton and referred to her and her husband’s desire to ensure that former employees "would be ruined, Arkansas-style." 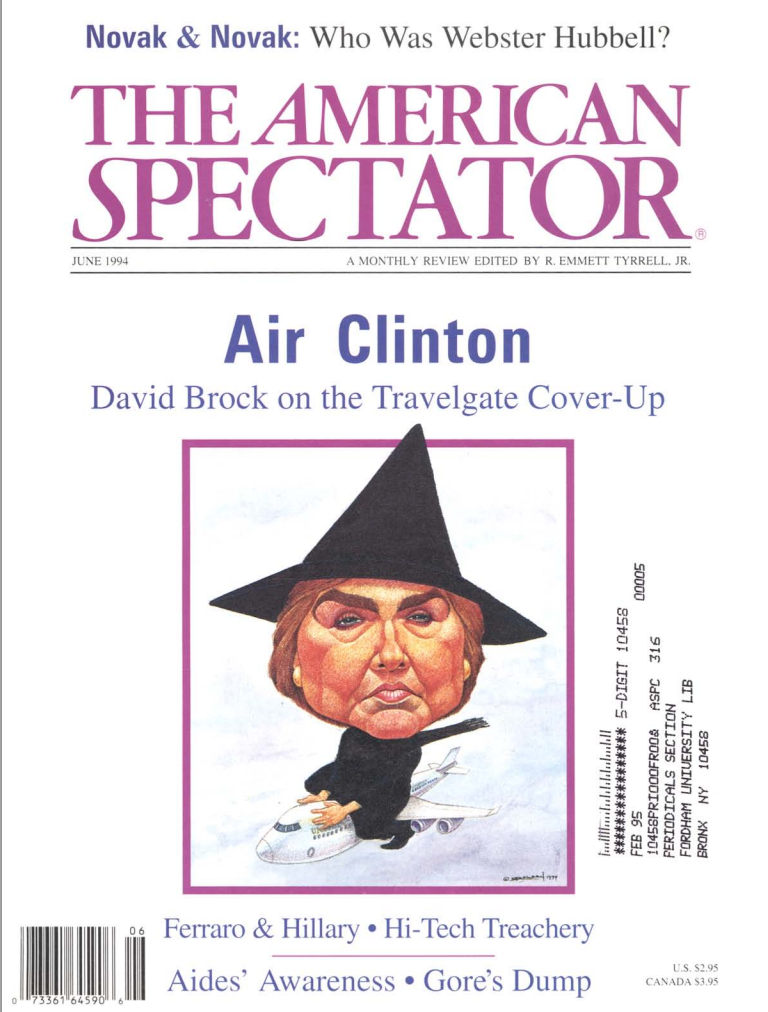 Brock was unsparing in his criticism of Hillary Clinton in various pieces for the magazine. In "Where Was Hillary?", a September 1994 investigation of Clinton’s foray into futures trading, he dismissed her explanation of an apparent conflict of interest, writing that her "various alibis and fallback positions appear untrue because they are logistically impossible."

In "Health Hath No Fury," which appeared in November 1996 as an excerpt from Brock’s book The Seduction of Hillary Rodham, he called her widely touted healthcare reform plan "a deceptively presented socialist package [that] alienated supporters even within her own White House."

He also expressed wonder at "her mystifying reliance on a circle of advisers whose ideas were far out of the mainstream."

Brock received an advance of $1 million for The Seduction of Hillary Rodham.

Brock recanted most of his criticisms of the Clintons in Blinded by the Right: The Conscience of an Ex-Conservative, his bestselling 2002 memoir, and claimed that many of his articles for the magazine contained factual errors.

A reviewer in the Washington Post derided Brock’s "hyperbolic mea culpas" in the book and "his obvious talent for turning contrition into a career move."

Other portions of Blinded by the Right addressed fashion; in one, Brock confessed his envy for the "Savile Row suits and Turnbull & Asser shirts and ties" worn by his former boss, R. Emmett Tyrrell, Jr., the Spectator’s editor-in-chief.