The DNC published a blog post earlier in the morning paired with a picture of another of Trump's finalists for the Supreme Court nomination, Judge Thomas Hardiman, instead of Kavanaugh. Hardiman sits on the U.S. Court of Appeals for the Third Circuit. 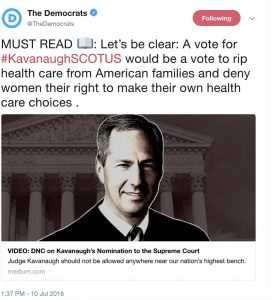 "We know #KavanaughSCOTUS is an extremist who has been expressed disturbing views on presidential power and would criminalize abortion. Call your Republicans senators, today: 202-224-3121," Perez tweeted. 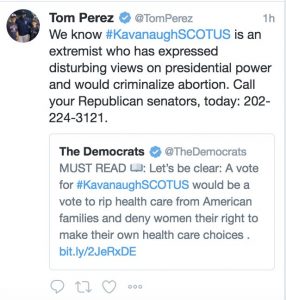 The DNC deleted its initial tweet with the incorrect picture and sent out another tweet with the correct one, but not before they were mocked by several conservative reporters and the office of Sen. Orrin Hatch (R., Utah).

"Fill in the blank" opposition keeps getting people in trouble.

That's not even Judge Kavanaugh. https://t.co/ep8vAzootd

.@TheDemocrats just put out an article attacking Judge Kavanaugh but they used an image of Judge Hardiman instead and I cannot stop laughing. pic.twitter.com/d9hbw1FVVV

Oh man, it just keeps getting better. Now @TheDemocrats have replaced the original tweet with an image supposedly of Judge #Kavanaugh, but…what?

Trump announced on Monday night that he was nominating Kavanaugh to replace retiring justice Anthony Kennedy on the nation’s highest court, according to the Washington Free Beacon.

Kavanaugh will now face confirmation hearings before the Senate Judiciary Committee, followed by a vote before the full Senate, assuming he clears the smaller committee. Senate majority leader Mitch McConnell (R., Ky.) has promised the vote will happen by the fall, before midterm elections. Judiciary Committee chairman Chuck Grassley (R., Iowa) said Thursday that the confirmation would move as quickly as possible but may not be before the Court’s new term begins in October.

Kennedy announced his retirement two weeks ago, just hours after the closing of the Court’s term. His departure will become official at the end of July, ending 31 years of service following his appointment by President Ronald Reagan.

Kennedy was generally perceived as the Court’s center, serving as the key swing vote in 5-4 cases that otherwise split the Court’s four liberal and four conservative justices. Trump’s advisers and boosters made clear in the days following Kennedy’s announcement that his replacement would be more in the vein of Trump’s first SCOTUS pick, Gorsuch: an originalist, textualist, and all-around judicial conservative.