A group promoting progressive health care policies in Nevada paid for Facebook advertisements in which the source of the content appeared to originate from a pair of local, state-based news organizations—news organizations that did not exist in any meaningful sense.

While the ads in question rolled out in 2018, the tactics of Health Care Voters for Nevada have contemporary importance as recent reporting has revealed the scope and influence of the organization's dark-money parent group, the Sixteen Thirty Fund.

"Trump's new tax law will hurt Latinos the most," one such ad reads, which appears to emanate from a posting by "Nevada News Now." However, there is no world wide web URL for Nevada News Now, and if it was a Facebook group, it has since been deleted.

Similar ads also appear from a group called "Silver State Sentinel" but little proof such an organization is real exists.

Facebook did not respond to requests about whether Nevada News Now or Silver State Sentinel was ever a Facebook group, but parts of the content suggest they both were.

Many of the ads were short videos between 20 to 40 seconds with brief on-screen claims about health care policy. However, those ads would often end with a graphic inviting the viewer to "Tell us what you think in the comments" followed by a professional looking graphic for the so-called news outlets. 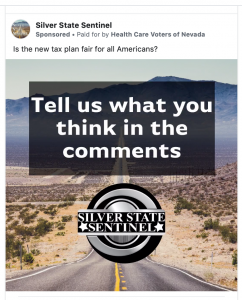 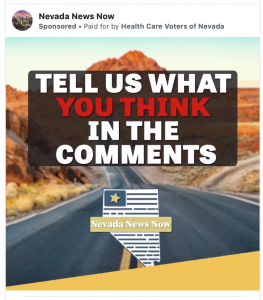 Facebook began organizing and publishing a searchable database of paid political advertisements on May 24, 2018, at a time when the company was under public and congressional scrutiny in the wake of acknowledgements that Kremlin-backed groups had been using the platform in deceptive ways to divide Americans against each other and to influence the 2016 elections.

The posts by Nevada News Now and Silver State Sentinel stopped just three weeks after the Facebook archiving tool was begun. Given that the archive did not start until May 24 of that year, it is impossible to know how many similar ads were run prior to that date.

A combined total of $47,600 was spent to boost the content over three weeks. That amount is not an insignificant sum for a Facebook campaign when one considers that the well-funded national campaign for Bernie Sanders spent about $18,000 in Facebook ads in a single week in April of 2019.

About two-thirds of the ads stated Health Care Voters of Nevada was paying for the content boost. Of those, however, it still appeared as though that agency was only boosting content that had first been posted by one of the news organizations.

The other third of the ads would have contained no disclaimer, thereby making it appear as though the content was in someone's Facebook feed because of the choices and activities of either "news" group. But those posts would also have indicated they were "promoted," which only would have a limited indication that money was spent to increase the visibility of the posts.

Promoting content with names that sound like news outlets on social media channels mirrors some of the disinformation activities of Russian groups in the run up to the 2016 election. For example, Twitter eventually banned several Russian-created accounts with handles such as @ElPasoTopNews, @MilwaukeeVoice, @CamdenCityNews, and @Seattle_Post.

Health Care Voters of Nevada is neither a political action committee nor a nonprofit, and it is not registered in any way with the Nevada Secretary of State's office.

Furthermore, once money is taken in from donors, the fund does not have to document how it is divvied up between the numerous other entities under the umbrella.

Neither Health Care Voters of Nevada nor the Sixteen Thirty Fund responded to emailed requests for comment for this story.

A recent report by the D.C.-based think tank Capital Research Center shows how the Sixteen Thirty Fund is part of a broad dark-money network on the left that has helped take in and move about $1.6 billion in political money in recent years under the guise of "philanthropy."

After the 2018 elections concluded, similar Facebook tactics came under scrutiny for billionaire and progressive donor Reid Hoffman, who earned his wealth as the founder of LinkedIn.

Hoffman and others helped create a Facebook entity called "News for Democracy," which created groups with Republican or right-of-center sounding names, but then pushed content with left-leaning themes.

Facebook announced an investigation into the group in January

"During the 2018 midterms, News for Democracy helped create at least 14 Facebook pages and purchased the ads that ran on them, according to a person familiar with its operations who was not authorized to speak on the record," the Washington Post reported. "While the ads, cached in Facebook's public database, show that News for Democracy paid for them, the pages themselves—which are listed as news companies—do not disclose their backers or offer any identifying information beyond their name."