UPDATE: Booker claims he didn't read sign, didn't know it was about Israel

New Jersey senator Cory Booker (D.) was pictured on Friday afternoon at the liberal Netroots Nation conference holding a sign calling for the removal of security borders in Israel, a policy proposal from a radical anti-Israel group with financial ties to terrorist groups.

Booker, standing next to radical activists from the U.S. Campaign for Palestinian Rights, is holding a sign that says, "From Palestine to Mexico, all the walls have got to go," a slogan used by the group in its call for the removal of Israeli security barriers used to protect its citizens from terrorist attacks.

Excited to be here at Netroots Nation talking with progressives like Sen. Cory Booker about our shared commitment to freedom, justice, and equality for all people. #NN18 pic.twitter.com/ljswLmv32w

The picture of Booker was posted by the U.S. Campaign for Palestinian Rights, a radical activist group that supports anti-Israel campaigns such as the Boycott, Divest, and Sanction (BDS) movement and was recently found to be financially tied to designated terrorist groups such as Hamas and Islamic Jihad.

"Excited to be here at Netroots Nation talking with progressives like Sen. Cory Booker about our shared commitment to freedom, justice, and equality for all people," the group wrote.

Booker's senate office did not initially respond to an inquiry on the picture and whether he believes security barriers that prevent terrorists based in the West Bank and Gaza Strip from entering Israel should be removed, but after publication sent a statement claiming the New Jersey senator didn't know what was written on the sign he was holding.

"Just before delivering a speech in New Orleans, Senator Booker was approached by dozens of people for photos," said spokesman Jeff Giertz. "In one instance, amid the rush, he was posing for a photo and was passed a sign to hold—he didn’t have time to read the sign, and from his cursory glance he thought it was talking about Mexico and didn’t realize it had anything to do with Israel."

Giertz added that Booker does believe security barriers are necessary as long as "active terrorist organizations threaten the safety of the people living in Israel."

"He hopes for a day when there will be no need for security barriers in the State of Israel, but while active terrorist organizations threaten the safety of the people living in Israel, security barriers are unfortunate but necessary to protect human lives," Giertz said.

The U.S. Campaign for Palestinian Rights slogan Booker showcased at the conference is a reference to the security fence built by Israel during the Second Intifada, a wave of Palestinian terrorism that claimed the lives of more than 1,000 Israelis. Constructing the security fence is widely viewed as one of the most effective antiterrorism measures Israel has ever taken, dramatically reducing suicide bombings.

Standing next to Booker in the picture is Leah Muskin-Pierret, who heads government affairs for the group and is wearing a shirt that says, "Palestine is a feminist/queer/refugee/racial justice issue."

Muskin-Pierret has been a vocal anti-Israel advocate since her college years at Tufts University, where she was an active member of Students for Justice in Palestine, the main vehicle for rising anti-Israel activity on college campuses across the United States.

Muskin-Pierret's views on Israel are so radical that she has even targeted J Street, a left-wing advocacy group 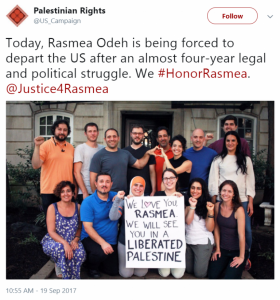 "Lobbies like the American Israel Public Affairs Committee (AIPAC) and the only superficially more progressive J-Street continue to strong arm congressmen and presidents alike to swear their allegiance to Israel and hound those who dare voice even tepid dissent," wrote Muskin-Pierret, who goes on to say the groups are controlled by "the same corrupt political money."

She also contributed to the legal defense fund for Rasmea Odeh, who was convicted for her role in 1969 terrorist bombings in Jerusalem that killed numerous Israelis. The U.S. Campaign for Palestinian Rights has regularly voiced support for Odeh, professing its "love" for the terrorist and saying it hopes to see her in a "liberated Palestine."

Booker did not mention Israel during his Netroots Nation speech, during which he said that things have gone "savagely wrong" in the United States.

Booker, viewed as a possible Democratic presidential candidate in 2020, came under fire from the pro-Israel community late last year over his opposition to the Taylor Force Act, legislation that cut aid to the Palestinian Authority until it ended its "pay to slay" policy of paying families of terrorists. Booker voted against advancing the now-passed law out of the Senate Foreign Relations Committee.

Update 7:22 p.m.: This piece has been updated with a statement from Sen. Cory Booker's spokesman.