White House Counselor to the President Kellyanne Conway appeared on CNN Monday to sarcastically slam the idea the former FBI Director James Comey swung the presidential election, only for the show's chyron to parrot it as a sincere response.

"I saw Jim Comey last night and I said ‘this guy swung an election?' I don't think so," Conway told Chris Cuomo on CNN, shaking her head in disbelief at the notion.

"He struggled to answer basic questions," Conway added, further showing how unimpressed she was with Comey's interview. 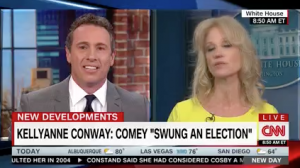 About fifty minutes after Conway made the sarcastic comment, CNN host Christopher Cuomo affirmed Conway was sarcastic on his show.

In our intv on @NewDay you were clearly being sarcastic about the idea comey could swing an election. https://t.co/mBUpu3kYVk

Conway made a similar comment on ABC's "Good Morning America" Monday morning about her not believing Comey could swing the election.

She found the coverage of her words misleading there too.

This misleading headline should include an eye roll and question mark. Point I made on 3 shows is that we are supposed to believe THIS guy swung an election? I don't think so. Kellyanne Conway slams Comey: 'This guy swung an election' – ABC News https://t.co/f0GdDE6Tvd

CNN Reporter: ‘Controversial’ for Trump to Speak at Gettysburg Because He Defended Confederate Monuments