Bloomberg Gave a Liberal Group $5 Million. Its Political Director Just Called Him a ‘True Terrorist’ Over Stop and Frisk.

Andre Fields is the political director for Fair Fight Action, a voting rights focused group launched by failed Georgia gubernatorial candidate Stacey Abrams. The $5 million from Bloomberg accounted for more than a third of Fair Fight's total fundraising in the second half of last year, and he was the featured guest at the activist summit the group held last month.

Fields on Monday night, however, took to Twitter to join the droves of liberal activists reacting to an audio recording of Bloomberg defending the stop and frisk policy adopted in New York City while he was mayor.

"Some of us know the true terrorist that he is," Fields wrote in a now-deleted reference to Bloomberg. 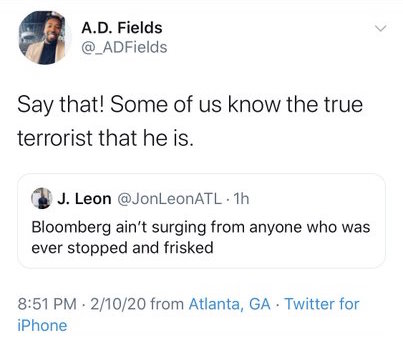 Screenshot obtained by the Free Beacon

Bloomberg's decision to mount a last-minute presidential campaign has caused Democrats to re-examine many aspects of his record, particularly as the party's putative frontrunner, Joe Biden, appears on the brink of collapse. Of particular concern to many critics are Bloomberg's actions as the Republican mayor of New York City, when he was a proponent of targeted policing in minority neighborhoods, a position that puts him far out of the Democratic mainstream.

Fields was stating his agreement with fellow Georgia activist Jon Leon, who threw cold water on the idea that Bloomberg was gaining traction in the Democratic primary. The comments came in the immediate aftermath of the release of the audio recording, in which Bloomberg defends stop and frisk as sensible policy to stop murders in the city, which he says were coming almost entirely from the African-American community.

"Bloomberg ain't surging from anyone who was ever stopped and frisked," Leon wrote in a Monday night tweet that Fields retweeted and favorited.

Since announcing his candidacy, Bloomberg has used his massive personal fortune to flood the airwaves with political ads and bolster allies on the left. He has supplemented the hundreds of millions of dollars he's spent on his presidential campaign with large contributions to liberal groups, giving $10 million, for example, to the liberal super PAC dedicated to defending the Democratic majority in the House of Representatives. He has pledged to spend a sizable portion of his personal fortune to defeat President Donald Trump in the general election, whether it's through his own campaign committee or outside groups.

His attempt to buy allies in the Democratic Party is being tested, however, as he gains traction in the polls, which show him emerging as a contender. The former mayor has tried to distance himself from his former policies, particularly on the issue of policing, but newly surfaced audio of Bloomberg defending his crime prevention strategy gave new ammunition to critics who hope to halt his presidential run.

Bloomberg in the tape defended his decision as mayor to place officers primarily in minority neighborhoods, arguing that 95 percent of murders were committed by young minorities.

"That's where all the crime is," Bloomberg said in the recording. "And the way you get the guns out of the kids' hands is to throw them up against the wall and frisk them."

Bloomberg on Tuesday reiterated his reversal on stop and frisk, saying his 2015 remarks "do not reflect my commitment to criminal justice reform and racial equity."

"I have taken responsibility for taking too long to understand the impact it had on Black and Latino communities," Bloomberg said in a statement.

The Bloomberg campaign did not respond to inquiries on Fair Fight and whether it was in communication with the group regarding the "true terrorist" remark.