After Black Lives Matter activist and Intercept columnist Shaun King implied that a man unconnected with the murder of a young girl may have committed the crime, the man's family claim they received death threats on social media.

King led the charge to find the killer of Jazmine Barnes, a 7-year-old girl whose family car was gunned down in Houston on Dec. 30. At first the girl's family told police the killer was a white man in a red pickup they saw on the scene, and the police released a sketch matching their description.

The same day, serial felon Robert Cantrell was arrested after authorities say he robbed a purse in nearby New Caney, Texas and led cops on a high-speed chase. Police found six other purses in his car, and he was charged with three felony counts of robbery, fraudulent possession of ID, and evading arrest.

In a now-deleted tweet from Friday, King posted an image of Cantrell's mugshot and strongly suggested he may have been Barnes' killer.

"What more can you tell me about Robert Cantrell? He was arrested in Houston hours after Jazmine was murdered on another violent crime spree," he tweeted to over a million followers. "We’ve had 20 people call or email us and say he is a racist, violent asshole and always has been. Just tell me everything you know." 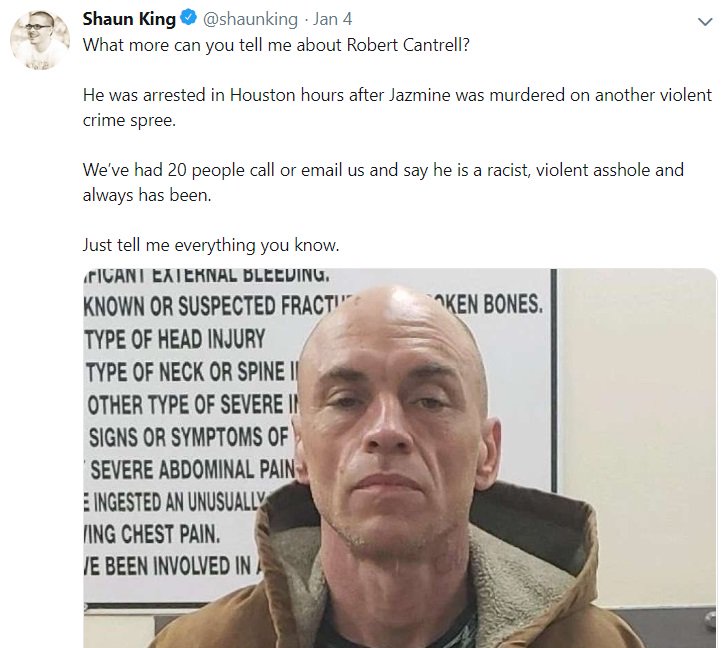 But it turned out the family was mistaken; the white man they saw at the scene of the crime was a bystander who fled because he didn't want to be shot as well. Based on a tip provided by King, the police apprehended Eric Black and Larry Woodruffe and charged them with the murder. Both men are black.

In an interview with local ABC affiliate KTRK, Cantrell's niece Hailey Cantrell said she was still receiving death threats, even after the correct suspects were arrested. "I heard someone is going to rape, torture and murder women and children in his family," read one comment on her Facebook page.

This is not the first false accusation King has spread on social media. In a May Facebook post and tweet, King publicly named and accused a Dallas police officer of sexually assaulting a civil rights attorney during a traffic stop. When police released body camera footage showing that the alleged assault never occurred, King wrote a Medium post acknowledging that the accusation was false, but he never apologized.