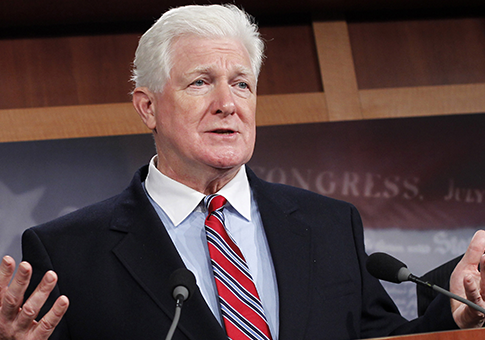 Moran said in 2007 that the pro-Israel group American Israel Public Affairs Committee was "the most powerful lobby" that pushed for the Iraq War "since the beginning," the Washington Post reported.

"I don't think they represent the mainstream of American Jewish thinking at all, but because they are so well organized," Moran said about AIPAC. "And their members are extraordinarily powerful—most of them are quite wealthy—they have been able to exert power."

The congressman also took a shot at the late Prime Minister Ariel Sharon during a speech to the American Muslim Council in 2001. Moran said in his address that Sharon was "probably seeking a warrant from President Bush to kill at will with weapons we have paid for."

Aside from his numerous anti-Israel remarks, Moran's violent temper has also tainted his reputation in Washington. Moran, a former boxer, allegedly "sucker-punched" Rep. Duke Cunningham (R., Calif.) during a debate on the House floor about sending troops to Bosnia in 1995.

Moran was involved in at least three assault cases from 2000-2001. His wife filed charges against him in June 2000 alleging that he shoved her during a confrontation; police dropped the case due to lack of evidence. Later that year, Moran angrily carried an 8 year-old boy from a parking lot into a recreation center. Moran said that the boy had "threatened to take his keys by pretending to have a gun."

After Moran's divorce, two female friends of Moran showed up at his house on his birthday in May 2001. According to Moran's office the two women "were surprised by each other" and another altercation ensued. Moran then took one of the women "by the arm, trying to get her out of the house."

Moran had to be physically restrained by his staff to keep him from scuffling with Tea Party protestors in 2010, Politico reported.

"We're not protecting him from you, we're protecting you from him," a staffer told the crowd.

Violence appears to run in the family, as Moran's son pleaded guilty to assaulting his girlfriend outside of a Washington, D.C., bar in late 2012.

Moran managed to be reelected by big margins for several decades in spite of all his controversies.