Records from the Manhattan district attorney's office indicate D.A. Cyrus Vance prosecuted just 13 individuals for anti-Semitic hate crimes between 2017 and 2019, less than half of those arrested in his jurisdiction during that time and a bare 6 percent of all complaints of anti-Semitic crime.

Records obtained from the New York County District Attorney—the official name of the Manhattan D.A.'s office—under New York state's Freedom of Information Law indicate just 21 prosecutions for anti-Semitic hate crimes in total since Vance took office. Although rates of prosecution have risen and fallen with recorded complaints and arrests for such crimes, they remain just a small proportion of each.

These new data raise questions about the seriousness with which the Manhattan D.A. office has taken anti-Semitism in its jurisdiction. This seriousness is of particular import to a city now facing not only a rise in anti-Semitic hate crimes but a surge in crime in general. 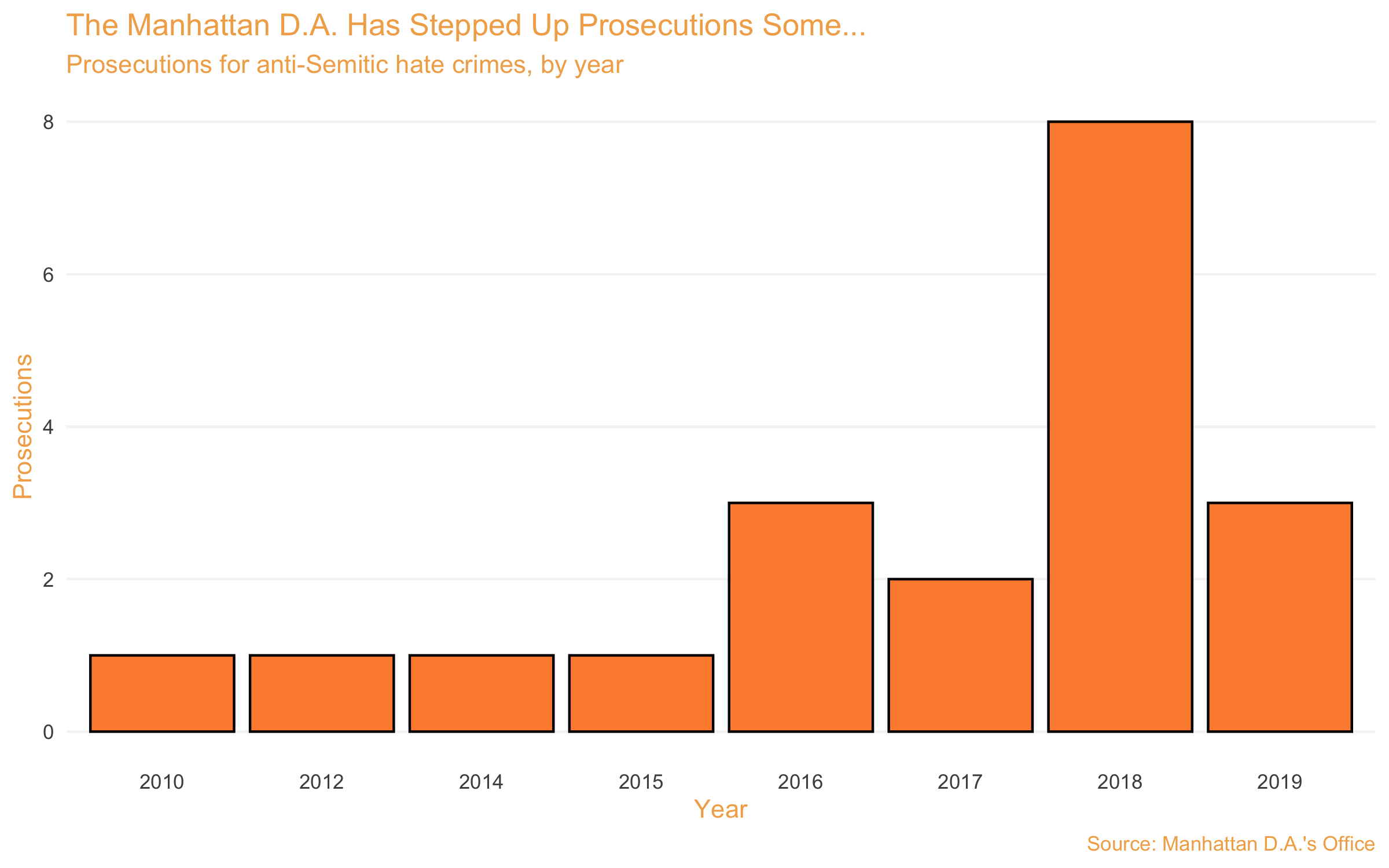 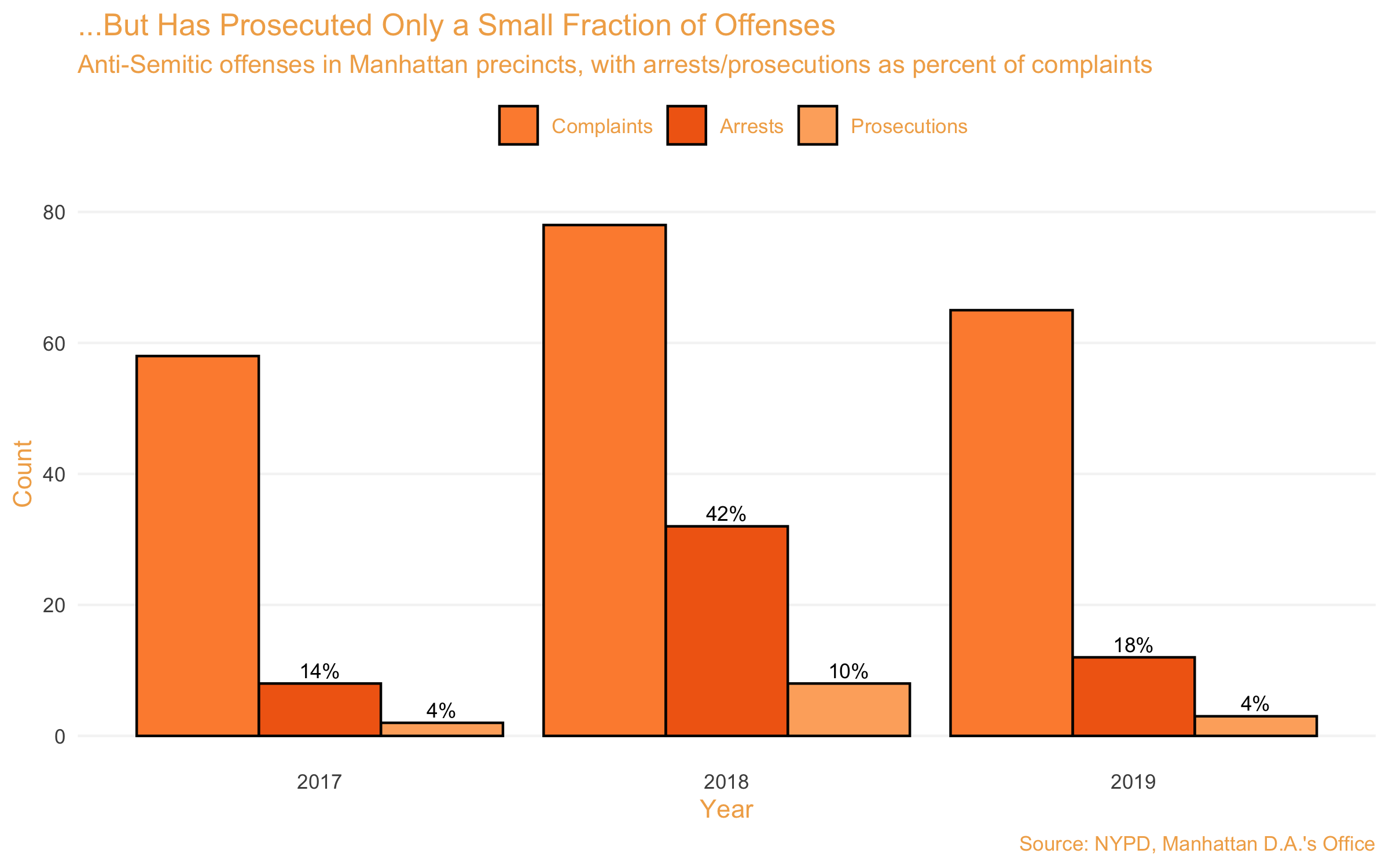 In all three years, the Manhattan D.A.'s office prosecuted just one individual for every four arrests reported in Manhattan. In total, just 6 percent of complaints resulted in an eventual prosecution.

The disparity between complaints and prosecutions is, in large part, explained by rates of arrest—if no offender is arrested, there is no one to be prosecuted. But there still remain significant disparities between numbers of arrests and numbers of prosecutions in each of the covered years. The Manhattan D.A.'s office did not respond to multiple requests for comment to explain how it exercises its prosecutorial discretion—the right of prosecutors to opt not to prosecute a case—in anti-Semitic hate-crime cases, or to offer other insight on this disparity.

One plausible explanation is that prosecutors may often opt not to charge nonviolent or misdemeanor offenses for lack of resources. Yet that explanation is belied by the cases the Manhattan D.A.'s office did choose to prosecute. For example, in 2019 it charged a 17-year-old with one count of aggravated harassment in the first degree and five counts of criminal mischief in the first degree for spray-painting a swastika, in addition to other graffiti. The office also seemed willing to prosecute individuals who demonstrated evidence of mental illness, such as the 30-year-old man who, after threatening to kill a Jewish person, said, "I will spare your life as a good Roman, I am a good Roman."

Beyond their number, the reports indicate Vance's surprising willingness to release hate-crime offenders without requesting bail. In June 2010, his office requested no bail for an individual charged with sending multiple threatening, anti-Semitic emails to Columbia University employees signed "Nazi Youth of Columbia U." It also did not request bail in the case of Jamal Deese, who graffitied multiple swastikas along his Uber Eats driver route and who would later be arrested for a string of major arsons.

To obtain this information, the Washington Free Beacon submitted a request under New York state's Freedom of Information Law requesting "all available documents" pertaining to offenses referred from 2010 onward to the Manhattan D.A.'s office that were judged to be anti-Semitic or anti-Jewish in nature. In reply, a FOIA officer provided a summary spreadsheet and redacted documents relating to a total of 21 cases, including two which were open at the time of the request. The Manhattan D.A.'s office did not respond to multiple requests for comment confirming whether these 21 cases account for the total number of prosecutions of anti-Semitic hate crime in that time period.

These data present an important picture of how the Manhattan D.A. has chosen to address—or not address—New York City's rising anti-Semitic crime problem. Reporting from the Free Beacon in January previously revealed that Vance's office had decided not to prosecute an MTA rider who cursed at an Israeli student with a hate crime. The D.A.'s office eventually reversed itself on this decision only following popular outcry from the Jewish community.

As the Free Beacon reported in January, Jews are the group most targeted for hate crimes in New York City. The NYPD reported 242 complaints of anti-Semitic hate crimes in 2019, a 30 percent increase over 2018, with many offenses concentrated in densely Jewish neighborhoods in Brooklyn. Manhattan, as discussed, saw a decline in anti-Semitic crime complaints between 2018 and 2019, but still accounted for the second-largest number of complaints by borough.

Offenses appear to have fallen in the early months of 2020, but dispute remains as to whether the city is doing enough to combat street harassment, graffiti, and other signs of surging anti-Semitism. At particular contention is New York state's decision to mandate the bail-less release of most nonviolent offenders from state jail, which has led to a spike in crime in the city overall. Governor Andrew Cuomo (D.) has indicated that he would be open to revising the law to exclude hate-crime offenders from automatic release, but negotiations remain ongoing in the state legislature.