A spokeswoman for the Transportation Security Administration on Tuesday posted photos online of a passenger’s luggage, which contained large amounts of cash, despite admitting it violated no laws or regulations.

Agency spokeswoman Lisa Farbstein posted a photo on Twitter showing a bag she said contained $75,000 in cash. "Is this how you’d transport it?" she asked. "Spotted this traveler’s preferred method." 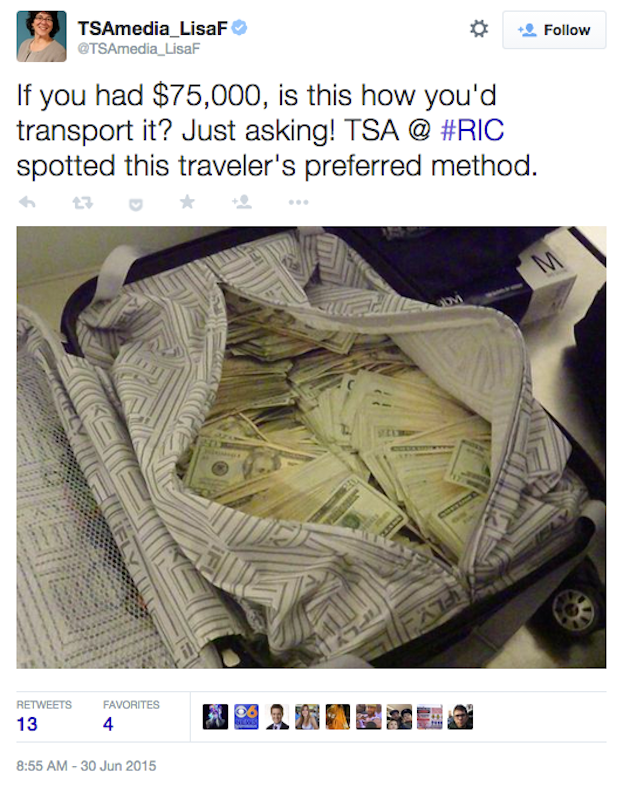 In a subsequent tweet, she acknowledged that the passenger, flying through Richmond International Airport, was doing nothing wrong. "It’s not on the prohibited items list."

"TSA didn’t seize/confiscate/take it," she said in another tweet. "It alarmed the x-ray machine as an unknown and we spotted it. It’s just a curiosity." 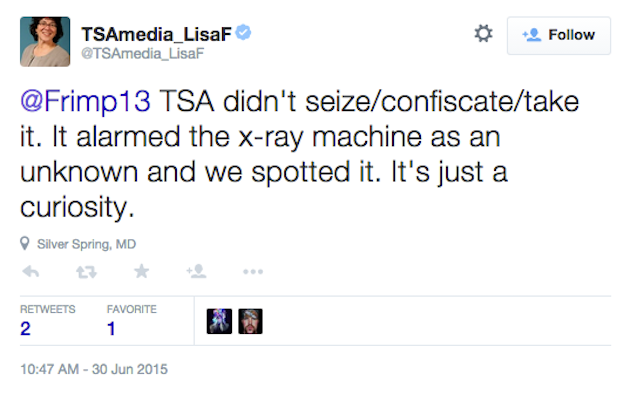 Farbstein did not say whether the passenger was travelling domestically or internationally. International fliers must declare cash in excess of $10,000.

While domestic passengers are under no such obligation, large amounts of cash in their luggage can lead to greater scrutiny from airport security officials, according to TSA’s chief counsel.

The TSA did not immediately respond to a request for comment on Farbstein’s tweets and whether they constituted a violation of policies governing passenger privacy or employees’ use of social media.

The agency has faced criticism for its treatment of passengers legally carrying large amounts of cash through airports.

TSA officers detained a fundraiser with the group Campaign for Liberty at the Lambert-St. Louis airport in 2009 after they found a metal box containing $4,700 in his luggage.

"We think what happened to Mr. Bierfeldt is a reflection that TSA believes passenger screening is an opportunity to engage in freewheeling law enforcement investigations that have no link to flight safety," a spokesman for the ACLU said at the time.

The agency defended its conduct. "Movements of large amounts of cash through the checkpoint may be investigated by law enforcement authorities if criminal activity is suspected," it said in a statement.

Update 5:27 P.M.: After publication, Farbstein emailed this statement: "TSA officers routinely come across evidence of criminal activity at airport checkpoints. Examples include evidence of illegal drug trafficking, money laundering, and violations of currency reporting requirements prior to international trips. TSA turned this bag over to law enforcement, which is investigating."

Biden Transforms US Passports To Accommodate All Gender Identities