The sanctions hit "a vast network" of businesses and financial institutions supporting Iran's Basij Resistance Force, a paramilitary organization tied to the Iranian Revolutionary Guards Corps, or IRGC, the Islamic Republic's chief fighting force that is widely known for conducting terrorist operations outside Iran's borders, including ones that have killed Americans.

Trump administration officials familiar with the new action said the sanctions are meant to expose Iran's global terrorism networks, including a web of financial institutions and shell companies that fund the rogue country's military intervention across the globe.

"The Bonyad Taavon Basij network is an example of how the IRGC and Iranian military forces have expanded their economic involvement in major industries, and infiltrated seemingly legitimate businesses to fund terrorism and other malign activities," Treasury Secretary Steven Mnuchin said in a statement. This vast network provides financial infrastructure to the Basij's efforts to recruit, train, and indoctrinate child soldiers who are coerced into combat under the IRGC's direction."

The Basij's financial network consist of at least 20 corporations and financial institutions, all of which have been hit with sanctions ahead of a Nov. 4 deadline by which the Trump administration aims to reimpose all sanctions lifted by the Obama administration as part of its landmark nuclear deal with Iran.

The sanctions are likely to cripple an already ailing Iranian economy and further fuel popular protests against the hardline regime.

The Basij has been a particularly prolific fighting force for Iran that operates across the Middle East.

The force "recruits, trains, and deploys child soldiers to fight in IRGC-fueled conflicts across the region," according to the Trump administration. 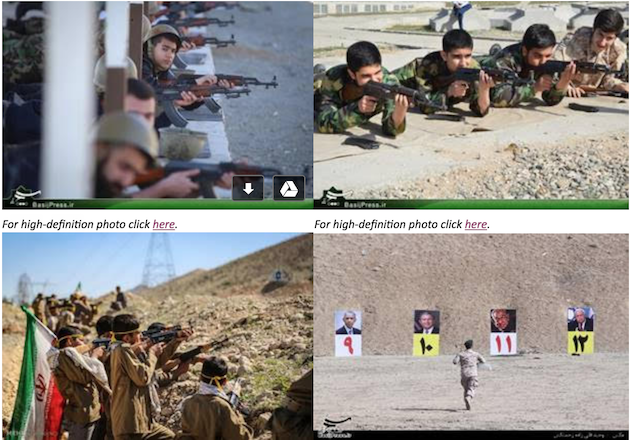 "The Bonyad Taavon Basij employs shell companies and other measures to mask Basij ownership and control over a variety of multibillion-dollar business interests in Iran's automotive, mining, metals, and banking industries, many of which have significant international dealings across the Middle East and with Europe," according to information provided by the Treasury Department.

"In addition to its involvement in violent crackdowns and serious human rights abuses in Iran, the Basij recruits and trains fighters for the IRGC-QF, including Iranian children, who then deploy to Syria to support the brutal Assad regime," according to the administration. "Since at least early 2015, the Basij has recruited and provided combat training to fighters before placing them on a waiting list for deployment to Syria."

Iran's Bank Mellat has been found to be a major financier of this fighting force and is now being slapped with sanctions by the Trump administration, a blow to the Islamic Republic's coffers.

The sanctions could also impact any international company or individual known to be doing business with any of the 20 or so entities now subject to sanctions.

"International companies from Asia to Europe that partner with companies associated with the Basij are conducting business that could contribute to the ongoing human rights abuses and terrorism the Basij exports to the region," according to the Treasury Department.

"Treasury urges international companies to ensure they are conducting the necessary due diligence to avoid engaging in sanctionable activity with entities that support the Iranian regime's malign activity," it said.