China’s military is continuing to mobilize military forces along the North Korean border despite official denials as Pyongyang appears set for a missile test launch this week, according to U.S. officials.

U.S. intelligence agencies continued to collect reports of Chinese military movements in border provinces that have been underway since last month.

Reports indicate the People’s Liberation Army is on a very heightened alert status, amid mounting tensions between North Korea and the United States and South Korea.

Several reports were derived from Chinese microblogging sites that in the past have provided reliable information on Chinese military activities.

One April 17 photo showed scores of soldiers marching on a street in the city of Shenyang on the way to Dandong, a major border city on the Yalu River dividing the two countries.

Another posting stated military vehicles carrying tanks were spotted heading to Liaoyang, in Liaoning province, also near the border. The movements were reported by a user who said he was in a logistic unit of a PLA unit in Siping, Jilin province, and added that the troops would be deployed to the border "soon."

However, officials said one of the most concerning reports was an April 14 report by a Chinese Internet user who quoted a friend in the Chinese military who was in a unit deployed along the Chinese-North Korean border who said troops for several days had been placed on "Level 1 alert status" the military’s highest readiness level.

Other reports last month said various PLA units in the region had been ordered to increase "war preparedness" to Level 2 and be ready to go to Level 1. The PLA uses a four-level alert status with Level 1 signaling preparation for conflict.

The latest reported force movements were not limited to ground troops.

Officials said formations of fighter jets were reported in Tonghua, located about 62 miles from the North Korean border in Jilin province on April 14.

Officials said another sign of increased military activity was the notice issued by Chinese security police in Yanbian, a town near the northwestern Chinese border with China that said all video recording and photos were banned because of the "North Korean situation."

Air raid sirens that are believed to have been for civil defense drills also were reported in Dandong for several days and border areas near North Korea suffered from limited cell phone reception, another indicator of military activity.

One Chinese citizen on the Twitter-like site Sina Weibo who was identified as Zang Shaojun Zsjun stated in an April 15 posting that the PLA was engaged in intensive training all along the border. Zang stated he had been traveling in Jilin province and described the region as having a "tense, warlike atmosphere."

According to U.S. officials, the increased military activities are Beijing’s preparation to handle any influx of North Korean refugees that would be expected shortly after the outbreak of any new conflict on the Korean peninsula.

The Washington Free Beacon first disclosed the April 1 Chinese military activities near North Korea when military forces in the region were placed on heightened alert and troops were being mobilized since around March 15. The first reports indicated both troops and warplanes were being mobilized.

Days later, photos surfaced of Chinese armored vehicles being transported on trucks toward the border.

Officials said the movements appeared to have been triggered by North Korea’s increasingly bellicose rhetoric, including an announcement that a "state of war" had been declared.

China’s state-run Global Times newspaper then confirmed the military movements on April 1. The newspaper showed photos of PLA troops in Shenyang engaged in live-fire training exercises, along with tanks and mobile artillery.

The reported Chinese movements contradict the Chinese government’s recent claim there is no buildup near the border. A Chinese Defense Ministry spokesman denied China is engaged in a "military buildup" on the border with North Korea on April 16.

"Such reports are not true," said the spokesman, Yang Yujun, according to state-controlled Xinhua.

One U.S. official said the spokesman may be correct since the troops are already in the area and were not built up from other regions.

Additionally, North Korea is continuing to move mobile missiles near the east coast of the country and intelligence officials believe a test launch could be carried out in the coming days.

The test firings could include salvos of short-range Scuds, medium-range Nodongs, and intermediate range Musudans. The idea behind the salvos is for North Korea’s military to try and confuse the up to six missile defense warships deployed in the region, including two from Japan, that are prepared to shoot down the missiles if they appear to threaten Japan or U.S. bases in the region.

The launch zone for a test firing is located between the cities of Wonsan and Hamhung.

Earlier estimates put the period of the test firings between April 10 and April 15, but no missiles were launched.

Now, the next window for the missile launches could be April 25, North Korea’s Military Foundation Day that marks the anniversary of the creation of the Korean People’s Army.

Intelligence officials believe the North Koreans are preparing for the first test launch of a Musudan, a 2,500-mile range system that can reach Guam, the major U.S. military hub in the region. Two Musudans were spotted on satellite imagery on the North Korean east coast, officials said.

Unlike earlier test launches, the North Koreans are not expected to inform the United States of the timing of the launches as a result of increased missile defenses in the region.

The Pentagon announced earlier it was moving two additional missile defense ships to the region to augment more than five already deployed to the region.

Meanwhile, North Korea recently showed off six of its H-5 medium-bombers at an air base near the Chinese border. The Chinese-made H-5s are believed to be one method North Korea could use to deliver a nuclear bomb.

The six H-5 bombers were photographed at Sinuju, a North Korean airfield. 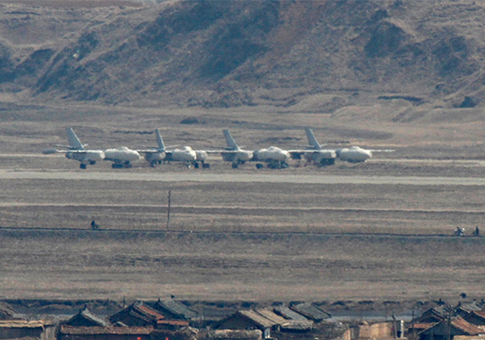 Chinese-made H-5 bombers were spotted at a North Korean military airfield at Sinuju, North Korea, near the border with China / Source: Chinese Internet