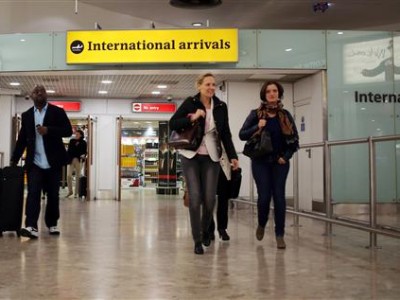 The State Department is warning travelers to Uganda of the dangers of exposure to a deadly Ebola-like disease in that country following the death of a healthcare worker in the country’s capital.

The government of Uganda confirmed this week that a healthcare worker in Kampala died of Marburg hemorrhagic fever, similar to the Ebola virus that is now ravaging several West African states, according to an internal State Department security report.

"Travelers should exercise caution if visiting or working in areas where the disease is known to be present and immediately report to the nearest health facility if they think they may have been exposed or are exhibiting symptoms consistent with the disease," the report by the department’s Diplomatic Security office said. The report was circulated Wednesday to private sector members of the Overseas Security Advisory Council, a State Department initiative.

The report stated: "It is important to note that, contrary to some reporting, Marburg is not a ‘new strain of Ebola.’"

"As members of the same family of viruses (filoviruses), the two afflictions share similar symptoms, methods of transmission, and mortality rates," the report said, adding that the outbreak in Uganda is unrelated to the Ebola epidemic in West Africa.

The report said it is not known how the virus passed from animals to humans but it is believed that infection is caused by contact with bat feces.

"Like Ebola, Marburg virus may be spread through direct contact with body fluids like saliva, urine, or blood of an infected person, or the body of someone who has died from the disease," the report said.

"In previous outbreaks, people who have handled infected non-human primates or have come in direct contact with their fluids or cell cultures have become infected; the first documented case of the disease, for instance, occurred with scientists in Marburg, Germany studying infected monkeys in 1967."

The report said exposure risk could be higher for travelers to central Africa, including Uganda.

"The virus is not known to be native to continents other than Africa, but as noted, outbreaks on other continents have been documented by those working with infected imported animals," the report said.

The report warned that people who have close contact with African fruit bats, human patients or non-human primates infected with Marburg are at risk of contacting the disease.

Countries where Marburg cases have been documented include Angola, the Democratic Republic of the Congo, Kenya, South Africa, Uganda, and Zimbabwe. Many outbreaks occurred among miners who worked in bat-infested mines.

According to the report, Marburg outbreaks occurred several times in recent years with the most recent one in 2012 claiming 15 deaths, and Marburg outbreaks in neighboring Democratic Republic of Congo claimed far more victims.

The report said fewer than 400 deaths were linked to the virus since its discovery in 1967 although the disease has an 80 percent mortality rate.

The Ugandan healthcare worker, a radiologist at a hospital in Kampala became ill Sept. 18 and died Sept. 28.

"The victim's brother and at least seven others are reported to have developed Marburg-like symptoms, and are currently under quarantine," the report said. "The Ugandan government confirms more than 80 other people are currently under surveillance, including more than 60 healthcare workers."

A total of 99 people in Uganda have been placed in quarantine in an effort to stem the outbreak, CNN reported from Kampala.

"As of today, a total of 99 contacts are under follow up. All the contacts are still in a healthy condition," Dr. Jane Ruth Aceng, director general for health services in Uganda, told CNN in Kampala Tuesday.

"The National Taskforce through the field epidemiologists and surveillance officers continues to closely monitor all people who got into contact with this confirmed case," she noted.

Marburg produces symptoms similar to those caused by Ebola, including fever, weakness, bleeding internally and externally, leading to organ failure and death.

"Symptoms gradually become worse and may include liver failure, massive hemorrhaging and multi-organ failure," the report said. "Early symptoms of Marburg are similar to other infectious diseases such as typhoid and malaria, so diagnosis can be challenging, especially in isolated cases or in locations where healthcare workers have no experience with the virus."

Tom Frieden, director of the Centers for Disease Control, said Tuesday that the handling of the Marburg case in Uganda was a "sign of progress" for efforts to control the outbreak of Ebola further north.

"It's like the movie, but there's not a movie made about it," Frieden said. "Marburg has a similar fatality rate, [is] spread in the same way, and [is] controlled in the same way."

Frieden said the CDC has done important work in Uganda to help authorities with laboratory testing and response. The assistance helped identify an embalmer who handled the victim’s body and later traveled to Kenya.

That person "does not, at this point, have Marburg, and the contacts within that patient's family in Uganda are being tested, and so far, there's not been additional cases," Frieden said.

"I mention this because often times in public health, what gets noticed is what happens," he said. "It's hard to see what doesn't happen. If we stop the outbreak in rural [areas] and prevent the outbreak of Marburg in Uganda, it's not headlines, but that tells us there's progress and gives us confidence we can control Ebola in West Africa."