The Pentagon has identified eight staging areas in Russia where large numbers of military forces appear to be preparing for incursions into Ukraine, according to U.S. defense officials.

As many as 40,000 Russian troops, including tanks, armored vehicles, and air force units, are now arrayed along Ukraine’s eastern border with Russia.

Additionally, large numbers of Russian military forces will conduct exercises in the coming days that Pentagon officials say could be used as cover for an attack on Ukraine. 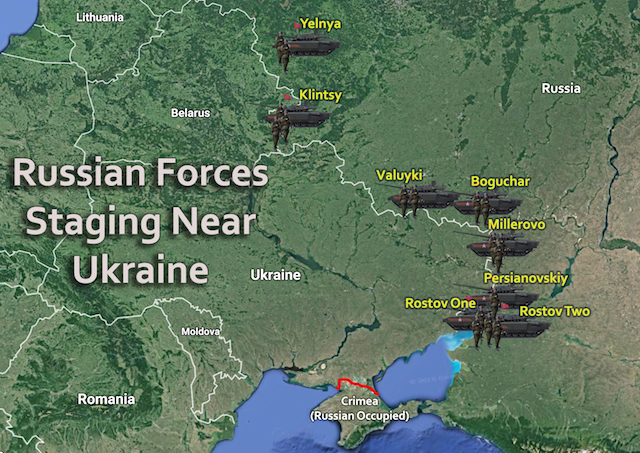 'Russian units will likely practice reinforcing the [Crimean] peninsula through such activities as amphibious landings and air defense exercises, and this may involve the change out of equipment and long convoys of military vehicles," one defense official said.

The military exercises are an ominous sign. Similar large-scale Russian exercises were conducted near Ukraine a month before Moscow carried out the covert military operation to take over the strategic Black Sea peninsula in March 2014.

Navy Capt. Danny Hernandez, a spokesman for the U.S. European Command, told the Washington Free Beacon that the upcoming Russian exercises are being closely monitored.

'We are extremely concerned about the increased tensions near the administrative boundary between Crimea and the rest of Ukraine," Hernandez said. 'We urge both sides to avoid provocative steps or rhetoric that could escalate the situation."

Russian forces do not appear to be building up inside the occupied Crimean Peninsula along the border with Ukraine, he said.

However, over the past several months large numbers of Russian troops and tanks have been moving into eight bases stretching from Yelnya, near Smolensk and northeast of Ukraine, southward through Rostov—a city located very close to eastern Ukraine.

Defense officials said it is not clear whether the massing of forces is saber rattling by Moscow designed to coerce Ukraine into accepting the takeover of Crimea or preparations for further conflict. 'Regardless of the reason, the warning time for Russian action has been greatly reduced" by the staging of forces near Ukraine, a second defense official said.

Rep. Mike Pompeo (R., Kan.) a member of the House Permanent Select Committee on Intelligence, said Russia is continuing aggression and threats against the rest of Ukraine after invading Crimea.

'This is unacceptable and will only serve to further instability in the region," Pompeo said. 'Unfortunately, President Obama is once again ‘leading from behind’ and is doing nearly nothing to buttress the Ukrainian people. Mr. Putin must respect the sovereignty of other nations. This is a non-negotiable lesson most countries learned long ago."

Wire service reports and online blogs have revealed satellite photos of the Russian military buildup at the eight locations.

Reuters reported in June on the deployment of troops to Klintsy, and the website InformNapalm reported July 30 that armored units of the 28th Motorized Rifle Brigade were moved to a base near Valuyki, and at Rostov.

A Russian military training camp reportedly was set up at Persianovskiy, located about 28 miles north of Rostov, according to a report by the online news outlet Bellingcat. Troops and aircraft at Millerovo also have been identified in satellite photos since 2015.

Reuters reported in September that a Russian military base was being set up near Boguchar, and the blog Russian Military Analysis reported that a motorized rifle brigade was deployed last year to Yelnya.

Mark Schneider, a former Pentagon official, said the troop movements are worrying signs that Moscow may be preparing for war with Ukraine.

'There is lot of press in the last week about a possible Russian invasion of Ukraine including massing of troops," said Schneider, now with the National Institute for Public Policy.

Russia has denied reports that Moscow is considering breaking diplomatic relations with Ukraine. Ukraine’s government has ordered troops mobilized and placed on alert.

Russia last week accused Ukraine of conducting covert sabotage operations against infrastructure inside Crimea, charges the Kiev government denied. Russian President Vladimir Putin announced that Russian forces in Crimea would be fortified as a result of the attempted sabotage. Putin is expected to visit Crimea later this week, Reuters reported from Moscow.

Schneider said another troubling sign of possible Russian military action was the recent firing of Putin’s chief of staff, Sergei Ivanov, a former official of the KGB and FSB intelligence services. 'Ivanov's firing could be related to Putin's desire not to have a powerful KGB/FSB general running the Kremlin when he is going to do something risky," he said.

Phillip Karber, a former U.S. arms control official who has traveled extensively in Ukraine war zones, identified several new military units at the eight locations, including up to two brigades of the newly established Russian First Guards Tank Army at Yelnya and Klintsy in the north, elements of the 20th Army located to the south of those units, and forces from the 49th Army deployed further south near Rostov.

'The fact that a full scale Russian invasion is still a plausible scenario after 30 months of conflict is an abject repudiation of an American policy of ‘leading from behind’ and West European fetish for trying to find ‘off-ramps’ that Putin hasn’t the slightest interest in taking," said Karber, now head of the Potomac Foundation.

Karber believes Russian military action against Ukraine could take place and that Moscow’s trumped-up claims of a recent Ukrainian 'terrorist" attack in Crimea could be used as a pretext.

Russia appears to be shoring up forces in Crimea and eastern Ukraine, he said. The upcoming military exercises will likely be conducted from areas that could facilitate an attack, using Russian forces deployed in Moldova’s Transnistria region and marine units on ships in the Black Sea, Karber said.

'For the next month the terrain is perfect for armor moving cross-country and the skies are clear for air," Karber said. 'The 24th of August is Ukraine’s Independence Day, which is when the Russians attacked in 2014. A successful campaign, with U.S. and NATO doing nothing but verbiage, re-establishes Russia as a major European Power that has to be dealt with and increases Putin’s popularity at home."

Karber said a full-scale Russian military offensive likely would aim to seize key military-industrial areas such as the tank plant at Kharkiv, the missile factory at Dnepropetrovsk, the shipyard at Mykolyev, and the port of Odessa.

Russian forces also could drive into Ukraine from the northeast to the outskirts of Kiev and place the capital within artillery range in a bid to force a change of government.

'Loss of that much population, around 14 million people, and territory would effectively end Ukraine as a viable state," Karber said, adding that the action would involve full-scale war, large numbers of refugees, and heavy casualties. It could also trigger anti-Russian guerrilla warfare.

Still, Russia does not appear to have all the forces in place for a major military operation, he said.

'The more aggressive and ambitious the attack, the further and longer it will isolate Russia from Western Europe, and it would gravely embarrass Putin’s favorite American presidential candidate and make his pro-Russian statements look naive and foolish at best, or worse, an apologist for the aggressor," Karber said, referring to Republican presidential nominee Donald Trump.