Russia conducted a test of a revolutionary nuclear-capable drone submarine that poses a major strategic threat to U.S. ports and harbors.

U.S. intelligence agencies detected the test of the unmanned underwater vehicle, code-named Kanyon by the Pentagon, during its launch from a Sarov-class submarine on Nov. 27, said Pentagon officials familiar with reports of the test.

No details were available about the location or results of the test.

Pentagon spokesman Capt. Jeff Davis declined to comment. "We closely monitor Russian underwater military developments, but we will not comment specifically about them," Davis said.

Development of the new drone submarine was first disclosed by the Washington Free Beacon in September 2015 and then confirmed by the Russian military two months later. Russian officials said the secret program was mistakenly disclosed.

U.S. intelligence agencies estimate the Kanyon secret underwater drone will be equipped with megaton-class warheads—the largest nuclear weapons in existence, with the killing power of millions of tons of TNT.

The weapon likely could be used against U.S. ports and bases, including those used by ballistic missile submarines.

Russia's nuclear weapons development in recent years has alarmed American military leaders in part due to a new doctrine adopted by Moscow that increases its reliance on nuclear forces in a conflict. The new doctrine indicates that Russia will quickly escalate to the use of nuclear arms to compensate for its aging and outdated conventional forces.

"The Status-6, a nuclear powered, nuclear armed drone submarine, is the most irresponsible nuclear weapons program that Putin's Russia has come up with," said Schneider, now with the National Institute for Public Policy.

"Status-6 is designed to kill civilians by massive blast and fallout," he said, noting that such targeting violates the law of armed conflict. 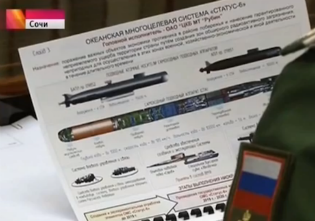 According to a Russian document disclosed on state television Nov. 10, 2015, the weapon is a self-propelled underwater craft capable of carrying a nuclear warhead up to 6,200 miles. The vehicle can submerge to a depth of 3,280 feet and travel at speeds of up to 56 knots.

A drawing of the drone submarine shows it will be nuclear powered, controlled by surface ships, and supported by a Sarov submarine.

The Russian document said Russia planned to build a Kanyon prototype by 2019 and begin testing that year. The Nov. 27 test indicates the document may have been a disinformation operation aimed at deceiving the United States about the program.

U.S. intelligence agencies assessed that the 2015 leak was Moscow's attempt to warn the United States about its displeasure with U.S. missile defenses in Europe and the deployment of missile defense ships to the region.

Russian presidential spokesman Dmitri Peskov told reporters one day after the leak that classified information had been accidentally disclosed—an unusual public admission of a security error that has raised concerns about false Russian strategic messaging.

The U.S. Navy is developing new underwater drones, but none will be nuclear armed.

Schneider, the former Pentagon official who has held a number of positions involving strategic weapons, said reports from Russia indicate the drone sub will be armed with a 100-megaton warhead.

"A cobalt bomb is a ‘doomsday' weapons concept conceived during the Cold War, but apparently never actually developed," he said.

Testing of the drone, which is said to be powered by a nuclear reactor with limited shielding, poses environmental risks. A guidance failure could result in an undersea nuclear disaster.

"The Obama State Department appears to be asleep at the helm on this issue," Schneider said, noting the New START arms treaty requires notification of new offensive strategic weapons in a U.S.-Russia commission.

"We could even propose a ban on such weapons," Schneider said. "There is no indication from the Obama administration that any negotiations are underway, or that the U.S. has even raised the issue with Russia."

During congressional testimony in December 2015, Rose Gottemoeller, then the undersecretary of state for arms control and international security, said the Russian nuclear-armed drone is a concern.

The Obama administration, however, took no action against Russia's violation of the 1987 Intermediate-Range Nuclear Forces treaty.

Rep. Mike Rogers (R., Ala.), chairman of the House subcommittee on strategic forces, has said that the Russians assert the nuclear drone submarine will be used to target coastal areas and inflict "unacceptable damage to a country's territory by creating areas of wide radioactive contamination that would be unsuitable for military, economic, or other activity for long periods of time."

Pavel Podvig, a Russian nuclear forces watcher, stated two years ago that the Status-6 payload "looks like a massive dirty bomb,"—a nuclear device that kills with radiation as opposed to a combination of a nuclear blast and radiation.

"A number of people noted that the description does not necessarily exclude the possibility that the initial ‘damaging' can be done by a regular nuclear device," Podvig said. "Which only makes this whole thing even more insane—do they think that a nuclear weapon on its own would not inflict ‘unacceptable damage'?" he said.