Sen. Marco Rubio (R., Fla.) sent a series of tweets on Thursday and Friday castigating the Miami Herald, claiming the newspaper mischaracterized his recent comments on Colombia to mean he supported a peace deal between the Revolutionary Armed Forces of Colombia, known as the FARC, and the Colombian government.

The State Department and the Council of the Americas on Tuesday co-hosted the 47th annual Washington Conference on the Americas, where Rubio promoted a bilateral assistance plan called "Peace Colombia," which develops greater cooperation between the U.S. and Colombia. The Herald reported on Tuesday that Rubio did not mention the aid, but instead "threw his support" behind a peace deal negotiated between Colombian's government and the FARC, a left-wing guerrilla movement.

During his speech, Rubio pushed "reassuring the Colombian people that the United States supports the implementation of Peace Colombia but that it will be conditioned on full compliance of the agreement by the FARC."

Former President Barack Obama announced the creation of Peace Colombia in 2016. It is in part meant to support "peace accord implementation" with a requested $390 million in bilateral foreign assistance. The Obama administration said it would also request funds for other areas to help Peace Colombia, which would bring the overall level of U.S. support for fiscal year 2017 to over $450 million. The plan is part of a U.S. effort started in 2000 to support and strengthen Colombia in a number of areas.

Rubio took to Twitter on Thursday to clarify his position, arguing that he supports conditioned aid to Colombia and did not say he "backed" the peace deal.

The Herald incorporated Rubio's response in an article published Thursday with the headline: "Florida's Marco Rubio backpedals on speech on Colombia peace plan."

Rubio took issue with the Herald's report, claiming in part that the new article contained too many "falsehoods" for him to address in a single tweet.

1st they write a story that is wrong, then when you point it out they write a 2nd one to say you are "backtracking" https://t.co/tvvA7l1u8R

140 characters not enough to detail all the falsehoods in article but here are 2. 1/3 https://t.co/tvvA7l1u8R

I didn't support "peace deal". I supported "Peace Colombia". That is the US funding plan which prohibits money for the FARC 2/3

Another tweet from Rubio seemed to misreport that the Herald said he was thanked for supporting a "peace deal" rather than Peace Colombia.

The Florida senator further attacked the Herald for "false reporting" and retweeted a post describing Franco Ordoñez, the reporter who wrote the Herald's story, as "dishonest."

Grateful that I have more twitter followers than @miamiherald has readers, so I can set the record straight on false reporting. MR 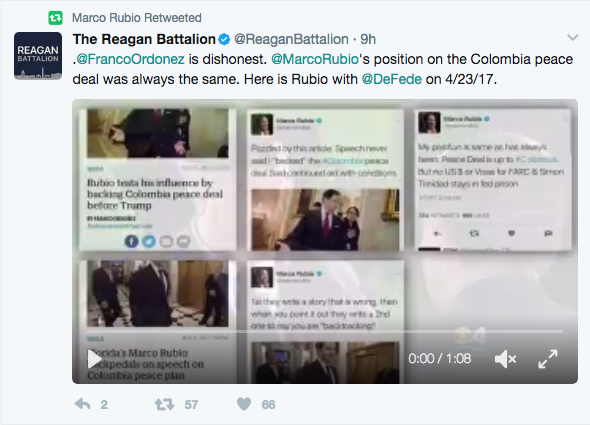 Rubio's office issued a statement on Thursday emphasizing that the Colombian government's agreement with FARC is "an internal matter and remains entirely up to the Colombian people and their democratically-elected government."

"However, no U.S. funds will be used to compensate the FARC, they must remain designated as a terrorist group, they must compensate the victims of their crimes, and FARC commander Simon Trinidad should serve his full sentence in federal prison," the statement added.

Rubio's office did not immediately respond to a request for comment.