Iran has been spending billions of dollars to fund the salaries of terrorist fighters across the Middle East, including in Yemen, Syria, Lebanon, and the Gaza Strip, according to a private U.S. government analysis conducted for a leading senator, the Washington Free Beacon has learned.

Iran’s defense budget ranges anywhere from $14 to $30 billion a year, with much of that money going to fund terrorist proxy groups and rebel fighters in a number of countries, according to a Congressional Research Service report conducted following a request by Sen. Mark Kirk (R., Ill.).

The report discloses that funding for these terrorist groups could actually be much higher, as Iran obfuscates public records about its defense spending and financial support for paramilitary groups secretly conducting operations outside the Islamic Republic.

The report was assembled following a request by Kirk for the Obama administration to disclose its estimates of "Iranian military spending, as well as Iranian assistance to Houthi rebels in Yemen, Shiite militias in Iraq, the Assad government, Hezbollah, and Hamas," according to a copy of that report obtained by the Free Beacon.

This includes potentially millions of dollars in monthly payments to pro-government forces in Syria, more than $1 billion in military aid to fighters in Iraq, and around $20 million annually to Hamas terrorists, according to the report.

"Some regional experts claim that Iran’s defense budget excludes much of its spending on intelligence activities and support of foreign non-state actors," the report states, estimating that actual military spending could far exceed the $30 billion Iran discloses annually.

"Similarly, another study claims that actual funding for the [Iranian Revolutionary Guard Force’s Al Quds Force] is ‘much greater’" than the amount allocated in the state budget, as the group’s funds are supplemented by its own economic activities," according to the report.

The White House estimated this year that Iran spends about $30 billion on its defense budget. Iran’s fiscal year 2015 budget is believed to be about $300 billion in total. 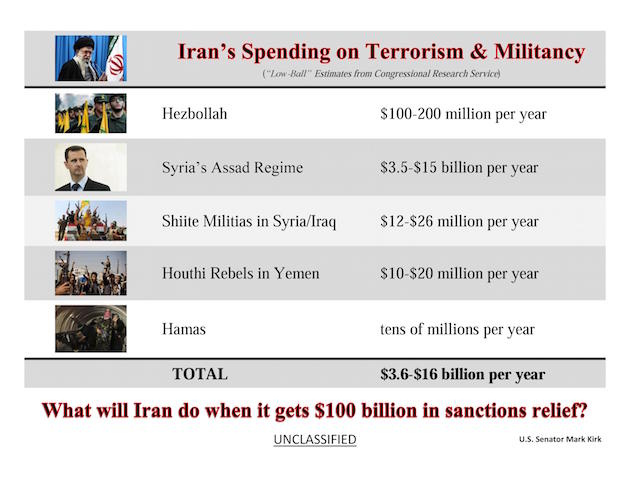 In Syria, for instance, Iranian-backed fighters are paid anywhere between $500 and $1,000 a month to take up arms in support of Bashar al-Assad’s embattled government.

Afghan fighters in Syria have disclosed that they "had recently returned from training in Iran and planned to fight in Syria," the report notes. These militants "expected to receive salaries from Iran ranging from $500 to $1000 a month."

Furthermore, "a Syrian from the central province of Homs stated that an Iranian recruiter had offered a monthly salary of up to $200 for joining a pro-government militia," according to the report, which relied upon publicly available information published by news outlets and other sources.

These Iranian-backed fighters in Syria "have formed sniper teams, led ambushes, established checkpoints, and provided infantry support for Syrian armored units" supported by the Assad government, according to the report.

Iran also has trained "Iraqi fighters" within its borders and then flown them "in small batched into Syria" with the help of the Lebanese terror group Hezbollah, the report discloses.

"In addition to facilitating the entry of Iraqi Shiites, anecdotal reporting suggests that Iran also recruits Afghans, as well as local Syrians, to join pro-government militias," according to the report.

Official estimates by the United Nations state that Iran is giving Syria about $6 billion a year, much of which is spent to fund military operations supporting the Assad government. Separate estimates speculate that the number could be as high as $15 billion.

A separate estimate provided by "an Arab security source in 2013" claimed that Iran paid "$600-700 million a month for expenditures in Syria," according to the report. Others put this number at more than double conventional estimates.

These funds are spent on a "range of military assistance to the Syrian government, including training and salaries for some pro-government fighters," according to the report. "The U.S. Department of the Treasury in a 2012 press release stated that Iran and Hezbollah had provided training, advice, weapons, and equipment for the pro-government militia Jaysh al-Sha’bi."

In July 2015, for instance, "Iran extended $1 billion in additional financial credit to the Assad government, reportedly bringing the total approved credit to $5.6 billion dollars since 2013," the analysis found. "Some reports have suggested that Iran has requested collateral in the form of land and real estate assets in exchange for its aid."

In Iraq, where Iran is supporting government forces battling against the Islamic State (IS), Iran has "spent more than $1 billion" on military aid since 2014, though it remains unclear if these funds are being sent to the Iraqi government or independent militias.

"Iran helped establish many of the Shiite militias that fought the United States during 2003-2011," the report notes. "During 2011-2014, the Shiite militia evolved into political organizations, but Iran has helped reactivate and empower some of them to support the Iraq Security Forces (ISF) against the Islamic State."

In 2014 alone, these Iraqi militias received anywhere from $1.5 million to $2 million a month from the Iranian government.

Iran also has continued its support for Hamas, and, in recent months since the nuclear agreement, has recommitted resources and money to the terrorist group.

"Hamas has historically received much of its political and material support from Iran," the report notes. "At one point, according to the Telegraph, Iran was reportedly providing Hamas somewhere in the range of $20-25 million per month to cover its governing budget after 2006, while also apparently providing ‘weapons, technical know-how and military training.’"

The IRGC’s Quds Force has independently provided "tens of millions of dollars" to Hamas’s armed military wing in the last several months, according to the report. This aid facilitates the "rebuilding of [terror] tunnels damaged in the 2014 Israel-Gaza conflict, the replenishment of rockets, and the salaries of Qassam Brigades personnel," according to the report.

Kirk, who opposes the recent nuclear accord, said that this information is a sign that the deal will lead to more terrorism by Iran.

"The Administration is celebrating support from a partisan minority of senators for a nuclear deal that threatens the security of the United States and our allies," Kirk said. "This deeply flawed agreement will transfer over $100 billion to a regime that U.S. Director of National Intelligence James Clapper calls the ‘foremost state sponsor of terrorism,’ and pave Iran’s path to nuclear weapons.

"Like North Korea before it, Iran will cheat on this flawed deal in order to get nuclear weapons. Congress must hold accountable the Iranian regime and ensure that our children never wake up to a nuclear-armed Iran in the Middle East."