China is militarizing disputed islands in the South China Sea and is using non-military coercion in a bid to control strategic waters in Asia, the Pentagon said in its latest annual report on the Chinese military.

"China continues to exercise low-intensity coercion to advance its claims in the East and South China Seas," the report to Congress says, adding that Beijing's tactic involves the use of "timed progression of incremental but intensifying steps to attempt to increase effective control over disputed areas and avoid escalation to military conflict."

Throughout the South China Sea, China is moving ahead with building military facilities on some of the 3,200 acres of islands dredged from the sea floor and appears headed for a major force of jet fighters.

The island buildup has included major construction on larger islands with runways of 8,800 feet or longer, enough to handle troop transports and other warplanes. Other features include new port facilities,and water and fuel storage in the Spratlys, a string of islands claimed by Philippines and several other regional states. 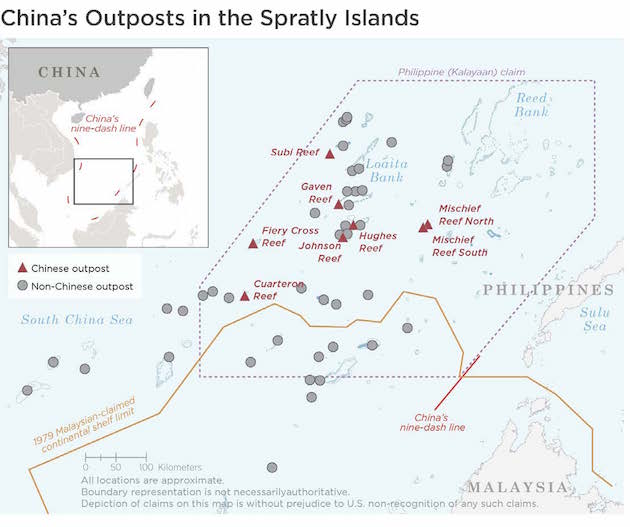 "As of late 2016, China was constructing 24 fighter-sized hangars, fixed-weapons positions, barracks, administration buildings, and communication facilities at each of the three outposts," the report said. 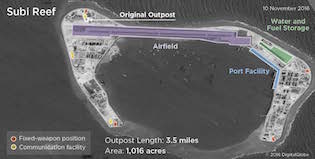 "Once all these facilities are complete, China will have the capacity to house up to three regiments of fighters in the Spratly Islands," the study says

Other facilities have been built on four small islets, Johnson, Gaven, Hughes, and Cuarteron Reefs.

The report challenged Beijing's claim that the buildup is defensive and designed to improve working conditions on the outpost. 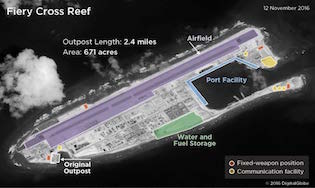 Instead, the goal of the PLA appears to be "attempting to bolster its de facto control by improving its military and civilian infrastructure in the South China Sea."

"The airfields, berthing areas, and resupply facilities on its Spratly outposts will allow China to maintain a more flexible and persistent coast guard and military presence in the area," the report says.

Satellite photographs of the islands showed deployments of fixed-weapon positions and communications facilities.

A defense official said the weapons emplacements are a concern. The positions are currently equipped with short-range naval guns, but intelligence analysis indicates the same positions can be upgraded easily to handle longer-range anti-ship missiles.

The facilities when fully militarized will give China sufficient power—mainly through PLA navy, maritime militia, and coast guard forces—to detect and counter activities by rival claimants and reduce the time needed to respond to rival naval and air activities.

A Navy destroyer conducted a freedom of navigation operation near one of the reefs last month and more are expected. China protested the exercise near Mischief Reef. 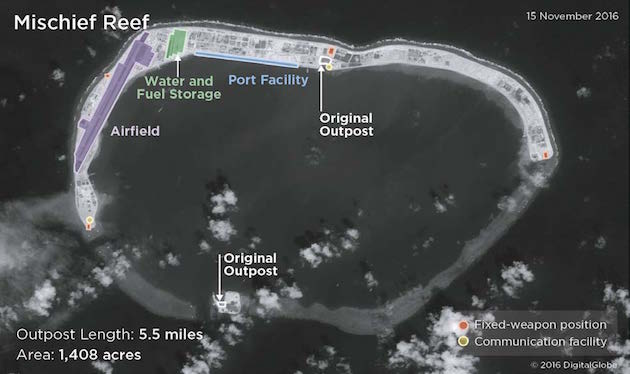 China's maritime claims in the South China Sea were rejected last year by the United Nations Permanent Court of Arbitration. However, Beijing rejected the court ruling and continues to assert sovereignty over some 90 percent of the sea.

On the use of coercion, the report noted that China engages in punitive trade policies and other measures to deter opposition to its actions.

After the court ruling in July, China surged the numbers of coast guard, maritime militia, and fishing vessels around various disputed islands.

Chinese leaders are employing information warfare tactics short of armed conflict to advance strategic interests. "This approach seeks to enhance China’s influence through activities calculated to fall below the threshold of provoking the United States, its allies and partners, or others in the Asia-Pacific region into open conflict," the report said. "This is particularly evident in China’s pursuit of its territorial and maritime sovereignty claims in the South and East China Seas."

In the East China Sea, China is claiming Japan's Senkaku Islands that are also claimed by Taiwan.

The United States recognizes Japan's administration of the Senkakus and has invoked Article 5 of the U.S.-Japan defense treaty, meaning the U.S. military would defend the islands from any Chinese attempt to take them over, the report said.

China last year continued to conduct maritime militia ship and aircraft in patrols near those islands.

China's military regards information operations—legal, political, and psychological warfare—as "essential" to countering enemies from intervening by controlling the information spectrum in the battlespace, the report said.

The PLA plans to use information blockades and information dominance to advance its military objective in war.

"China’s ‘information blockade' concept likely envisions the employment of military and non-military instruments of state power across the battlespace, including in cyberspace and space," the report said.

Similarly, China plans to use cyber attacks in a future conflict in order to achieve "cyberspace superiority" using offensive cyber attacks against forces that would degrade enemy military operations against China.

This year's annual Pentagon report, based on Defense Intelligence Agency reporting, is about 50 pages shorter than the 2016 report.

"Today there is palpable anxiety in Washington and among U.S. allies that the Trump administration's China policy may fail to truly defend American interests in the same manner of the failures of the Obama administration," said Fisher, with the International Assessment and Strategy Center.

"In order to defend against current and future Chinese threats, what the world needs the most are real facts about the state and projection of that threat," he said.

In addition to Chinese regional military encroachment, Beijing also is expanding its power projection capabilities through setting up overseas bases far from China's coasts. For example, in February 2016, the Chinese began construction of a military base at Djibouti, on the Horn of Africa.

Other Chinese "far seas" bases are expected to be built in what the Pentagon said was an indication China's military leaders plan to conduct operations in Indian Ocean, Mediterranean Sea, and Atlantic Ocean.

"A more robust overseas logistics and basing infrastructure would also be essential to enable China to project and sustain military power at greater distances from China," the report said.

"China’s space program continues to mature rapidly," it states. "China also continues to develop a variety of counterspace capabilities designed to degrade and deny the use of space-based assets by adversaries during a crisis or conflict."

Most of China's space warfare programs remain secret since the 2007 anti-satellite blast in space created thousands of pieces of space debris floating in orbit.

On other issues, the report highlighted China's growing military capabilities that include deployment of new intermediate-range missiles, the DF-26, which is capable of hitting Guam, a key U.S. military hub in the Pacific.

The PLA is the largest military in the world with 850,000 active duty troops that is undergoing a major restructuring and high-technology weapons modernization.

The Pentagon for the first time provided new details of a new PLA component called the Strategic Support Force that consolidated intelligence, cyber, space, and electronic warfare forces. The unit is part of China's effort to prepare for future high-tech warfare against the United States.

Cyber warfare also remains a Chinese military priority. The new support force "may represent the first step in developing a cyber force that creates efficiencies by combining cyber reconnaissance, attack, and defense capabilities into one organization," the report said.

Chinese nuclear forces also are expanding with the addition of nuclear powered missile and attack submarines, several new missiles, including systems with multiple warheads, and a new strategic bomber.

Missile forces are increasing in number, lethality, and survivability with road-mobile systems. Current nuclear missiles include between 75 and 100 intercontinental-range ballistic missiles.

"The CH-5 is China’s most heavily armed UAV to date, with the capacity to carry 16 air-to-surface munitions," the report said. "In the last two years, the PLA has also unveiled an armed intelligence, surveillance, and reconnaissance UAV, Gongji 1, and has deployed UAVs to the South China Sea."

The Dong Feng-31A has a range of more than 7,000 miles and "can reach most locations within the continental United States," the report said.

Most of China's military modernization has been supported by theft of foreign military technology. Targeted technology includes aircraft engines, tanks, and naval vessels; solid-state electronics and microprocessors; and guidance and control systems. The technology is used by China for reverse engineering for its weapons and other systems.

The latest report said the military balance across the Taiwan Strait has grown more unbalanced in favor of China's military.

"China’s multi-decade military modernization effort has eroded or negated many of Taiwan’s historical advantages in deterring PLA aggression, such as the PLA’s inability to project sufficient power across the Taiwan Strait, the Taiwan military’s technological superiority, and the inherent geographic advantages of island defense," the report said.

The Trump administration has put off a $1 billion arms sale to Taiwan over concerns the transfer would upset relations with China that has promised to try and rein in North Korea's nuclear and missile programs.